"The Mail on Sunday. Where truth goes to die," wrote one Twitter user. 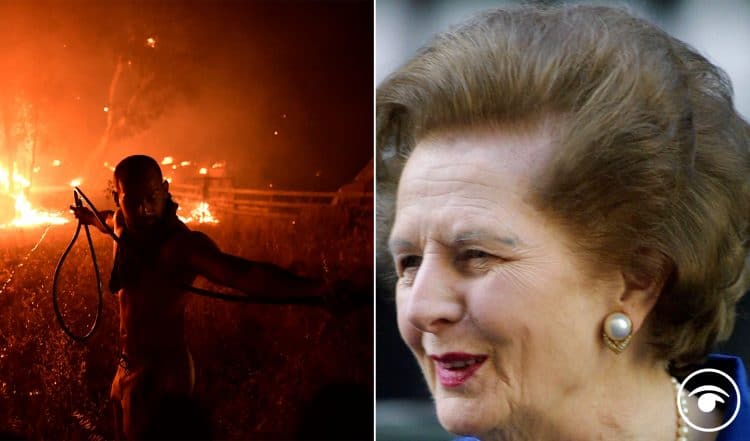 Mark Drakeford said the Prime Minister’s comments were “crass and offensive”, with the collapse of the coal industry causing “incalculable” damage to Welsh communities.

The Prime Minister had claimed that Mrs Thatcher had given the UK an “early start” in the shift away from fossil fuels by closing pits.

Drakeford’s comments were backed by a number of other leading political figures including Nicole Sturgeon who tweeted: “Lives & communities in Scotland were utterly devastated by Thatcher’s destruction of the coal industry (which had zero to do with any concern she had for the planet).

“To treat that as something to laugh about is crass & deeply insensitive to that reality.”

Sir Keir Starmer tweeted: “Boris Johnson’s shameful praising of Margaret Thatcher’s closure of the coal mines, brushing off the devastating impact on those communities with a laugh, shows just how out of touch he is with working people.”

Labour’s leader in Scotland Anas Sarwar said the remarks were “just another example of why the Tories are a disaster and the biggest threat to the union”.

The party’s energy spokeswoman at Holyrood, Monica Lennon, criticised the PM for “laughing about Thatcher’s pit closures that decimated our mining communities”.

Fellow Labour MSP Neil Bibby said: “To attempt to turn one of the most divisive and destructive periods in British history into a retrospective victory for the environment is deeply offensive to the people and communities who faced considerable hardship and misery.”

He said: “The Thatcher years might have been a spiffing time for Johnson, who was busy partying in the elite Bullingdon Club, but in the real world Thatcher devastated communities across Scotland.”

Scottish Greens Central Scotland MSP Gillian Mackay said: “Thatcher’s decimation of the coal industry had absolutely nothing to do with environmentalism and everything to do with her despicable anti-trade union ideology.

“Communities across Scotland were decimated by these cruel and vindictive policies which destroyed industry and left workers high and dry.

“It’s no surprise that Boris Johnson eulogises Thatcher, but we must ensure his government don’t repeat her actions as Scotland begins to transition from oil and gas to our renewables future.

“The Scottish Greens won’t allow the Tories to repeat the mistakes of the past. We will fight for a fair transition for workers that sees their jobs guaranteed in the sustainable industries of the future.”

So you get the point, his comments, joking or not, have offended a lot of people, especially in Red Wall seats, that the Party has been targeting, to some success.

Ignoring the backlash the Mail’s, and Micheal Gove’s ex, Sarah Vine decided to write a piece for the Mail on Sunday, supporting the PM’s comment. The fact is might have been a crass joke seems to have been ignored and they have ploughed on trying to back Johnson’s claim.

The headline reads “Coal mines row shows the Left needs a lesson in 1970s history because Margaret Thatcher was well ahead of her time on climate change awareness.

As ever there were some bemused comments on social media to the artilcle.

The Mail on Sunday. Where truth goes to die. pic.twitter.com/BAUbbMOZ3n

You know, I am not entirely sure Sarah Vine has read the provocatively titled 'Hot Air and Global Warming' 10 page section in Statecraft, a book by one Margaret Thatcher published in 2002, in which she dismisses climate change concern as a leftie plot. pic.twitter.com/X4xPg30GVY

Yeah and the Mail was well ahead of its time on Brexit awareness when in the 1930s it supported Hitler. ?pic.twitter.com/yAz0AjGUOS

Sarah Vine thought marrying Michael Gove was a good idea. Why would you trust her judgement on anything else?

Hey Sarah Vine thank god all those lorries have been removed from our roads.
a) Saves the environment
b) Makes the roads safer
c) Fights obesity.
But you're going to tell us that was Johnson's plan all along! ????????????

So, Sarah Vine, did Thatcher close the dockyards to save on water then? FFS. pic.twitter.com/yoXNcT5Jw9

So we can add 1970's history to the huge list of things that Sarah Vine knows nothing about. pic.twitter.com/PxXz14m2M1

Sarah Vine told us today that "Thatcher closed coal mines due to her concerns about climate change".
Next week: "Boris is misunderstood. His obsession with removing funding for free school meals is because he worries about childhood obesity".

Sarah Vine is now so far removed from the truth that she can’t even be arsed to get the decade correct. pic.twitter.com/3w33aZi0Xg

In her next column, Sarah Vine explains how Margaret Thatcher stopped free milk in schools to raise awareness of lactose intolerance. https://t.co/fOICaIEq4g

Thatcher didn’t stop us using coal: she just imported it rather than mined it. Didn’t do a thing for climate change.

I'm not taking any history lessons from Sarah Vine. I lived in one of the mining communities which was left devastated by Thatcher's battle with what she described as "the enemy within". It was absolutely nothing to do with "climate change awareness". And she knows it! https://t.co/Hc1vEiWyLS