Out of the frying pan into the fire? 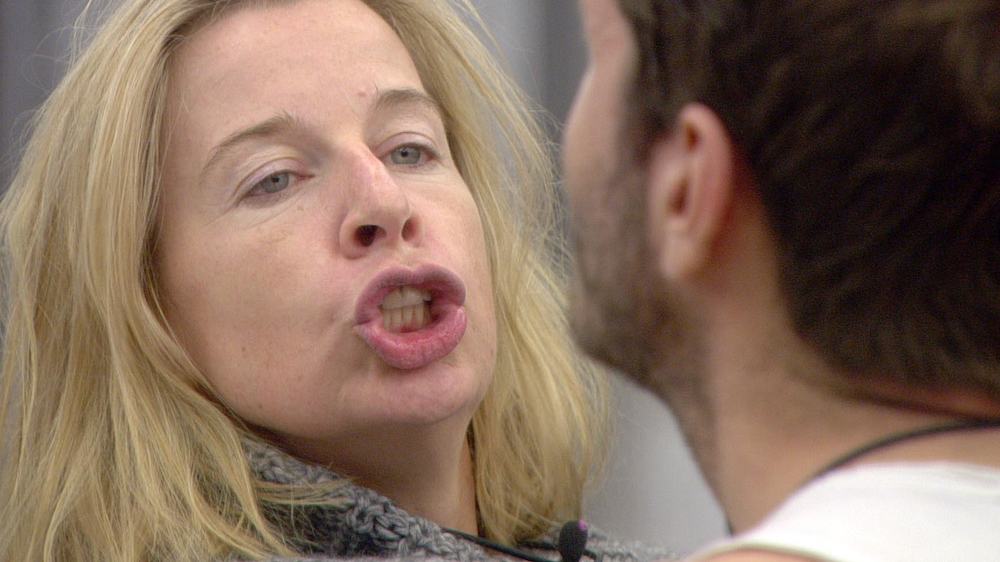 Katie Hopkins has been dumped as a cast member of Seven’s Big Brother VIP and will leave the country after breaching her contract, Guardian Australia has reported. It comes as Nigel Farage has been hired by GB News to try and save the floundering channel.

Hopkins, 46, broadcast a live video from what she claimed was a Sydney hotel room on Saturday morning, describing Covid-19 lockdowns as “the greatest hoax in human history” while joking about elaborate plans to breach quarantine rules.

Hopkins joked that she was opening her hotel room door naked, saying: ‘The police officer who checked me in told me when they knock on my door I have to wait 30 seconds ’til I can open the door [to collect food]. Then I can open the door but only if I wear a face mask.

‘[To] frighten the s*** out of them and do it naked with no face mask. What I want is the sergeant in the foyer to come up and tell me off so that I can stand there naked while he tells me off.’

She added: ‘You are living through the greatest hoax in human history, they are trying to take everything from you, and one of the very best and most powerful weapons we have is a sense of humour, and someone like me is probably a massive thorn in their sides.’

But the review has been superseded by a decision to terminate her contract, Seven confirmed the decision ahead of any government decision.

Pleased to hear Katie Hopkins is being sent back to the UK.
We don’t want to provide a platform for abhorrent racist views in this country, and I look forward to saying more on the topic on Sky News tomorrow.

Did Katie Hopkins actually bring the country together for a split second? The fuck off we’re full racists and the omg why did we allow her in progressives? It’s possible ?

So, the obscene racism was great-TV travel-exemption ticketyboo but not wearing a mask goes too far?

Another notch on our collective belts.

BECAUSE THEY CAN’T TAKE LOSING THEIR ADVERTISERS.

‘Cancelling Katie Hopkins will only make her stronger!’

She’s a white supremacist not a fucking Jedi.

Good. Why was she given special treatment in the first place?

While thousands of Australians are trapped overseas, serial right-wing troll Katie Hopkins shouldn’t have been in the fast lane to get into the country. https://t.co/YB2B2Xabuz

Big Brother 2021: Katie Hopkins trapped inside a house with 11 different strains of the coronavirus

you’d have to have rocks in your head as a network producer to import katie hopkins while you’re delicately trying to keep olympic sponsors onboard https://t.co/476M2wZuyp

You love to see it. Katie Hopkins won’t be appearing on ‘Celebrity Big Brother’ in Australia after talking about breaking hotel quarantine measures. pic.twitter.com/uB1GmWiPvi

Breaking news, Guardian Aust can reveal that British far-right commentator Katie Hopkins is expected to be dumped and will leave the country, after mocking Aust Covid-19 lockdowns and joking about her elaborate plans to breach hotel quarantine. #auspol

Channel 7 to act quicker than the Federal Government and drop Katie Hopkins, meaning she’ll have to fly home. https://t.co/BzsmAemK4K

Nigel Farage has been recruited to help save flailing GB News, as the new broadcaster’s ratings plummeted and senior executives started to jump ship.

The former Brexit Party and Ukip leader will host a primetime show four nights a week. Other shows will be tripped, meaning he will not replace any current presenters.

Farage’s arrival comes days after the station became embroiled in a culture war with itself, after its director of programming reportedly qui hours after a presenter was pulled off air for taking the knee.

The row sparked fears of a viewer boycott, with TV ratings showing figures on some shows the following day plunged close to zero.

Announcing the move on Twitter, Farage said: “Watch my new Prime Time evening show on GB News from next week.

“Tune into “Farage” Mon – Thurs at 7pm. I will not be taking the knee on this show!”

Related: ‘Rules are for little people:’ Javid tests positive for Covid but Sunak and Johnson will not self isolate