The announcement has been likened to that of cancelling Christmas, as it came just hours before Eid-al-Adha began on Friday. 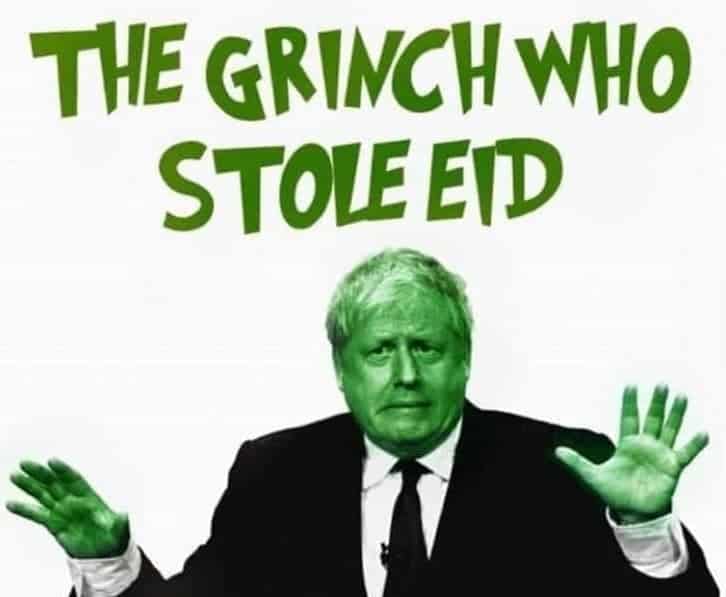 Yesterday Facebook and Twitter feeds were saturated with a meme of a green-faced Boris Johnson. “The Grinch who stole Eid”, the caption read, as Muslims had to call off their Eid celebrations at the last minute.

Muslim leaders slammed the Government for the “shockingly short notice” of new restrictions imposed in parts of northern England, which was announced the night before the Islamic festival of Eid.

The Health Secretary has denied that the new restriction was aimed at curtailing Eid celebrations, stating that “immediate action” was needed across Greater Manchester and parts of east Lancashire and West Yorkshire to keep people safe.

The announcement has been likened to that of cancelling Christmas, as it came just hours before Eid-al-Adha began on Friday.

The Muslim Council of Britain’s secretary general, Harun Khan, condemned the Government for making the announcement at “shockingly short notice”.

Yesterday he said: “With the first day of Eid being today, for Muslims in the affected areas it is like being told they cannot visit family and friends for Christmas on Christmas Eve itself.

“Whilst the safety of communities is of paramount importance, as has remained the case from the very outset of this crisis, so is effective communication delivered in a timely fashion.

“Failure to communicate makes it difficult for communities across the country to continue working together to minimise the spread of the virus, whilst eroding trust in the ability of authorities to steer our course as we tackle the Covid-19 crisis.

“The UK Government has failed to provide clarity on the shockingly short notice and the reasoning behind the new rules that British Muslims deserve – any such clarification would be most welcome.”