“At the time that I sent it, I looked at it, and I saw the comedy value in it." 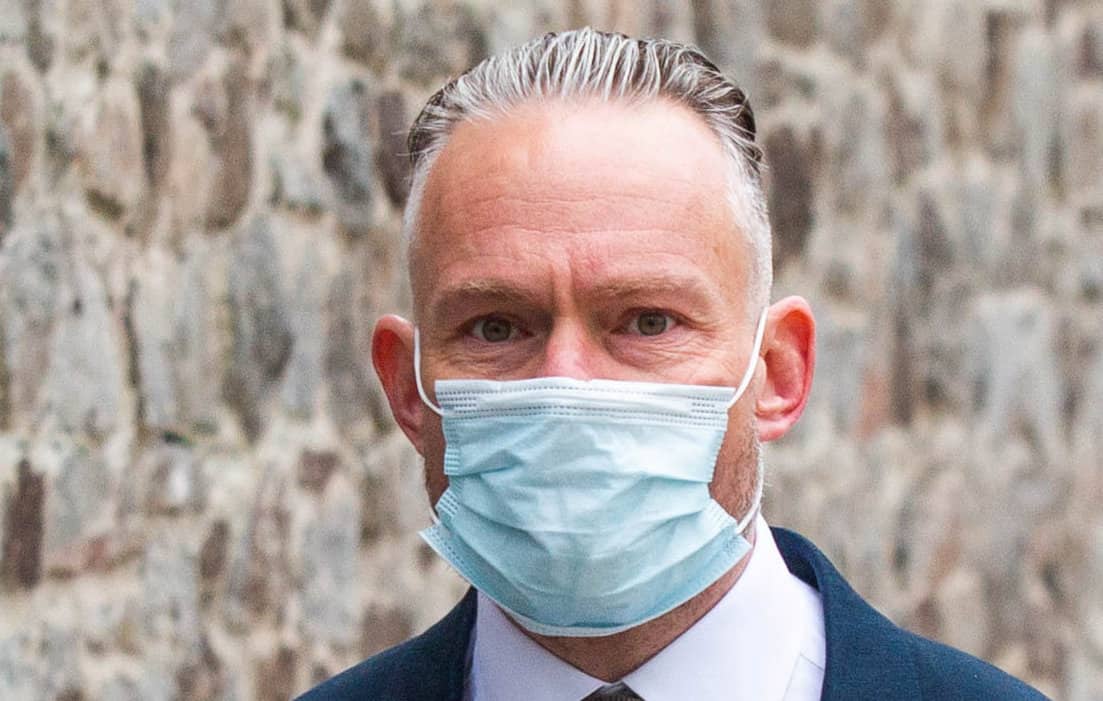 A police officer shared an allegedly grossly offensive Internet ‘meme’ of George Floyd for a “cheap laugh”, a court heard today on Friday.

Geraint Jones, 47, was charged with sharing the image following an investigation by the Independent Office for Police Conduct (IOPC).

The meme was a crude image featuring George Floyd, who died on May 25 last year after a police officer in Minneapolis, USA, knelt on his neck.

It had been photoshopped to include a large, naked black man, with a large penis, sat on Mr Floyd’s back.

The nude man in the image is Wardy Joubert III, who has been the subject of a popular Internet meme that has circulated on social media since 2012.

Jones, a custody sergeant for Devon and Cornwall Police, is alleged to have shared the image to a WhatsApp group with a number of his police colleagues.

He is said to have done so on May 30 last year – five days after the death of Mr Floyd.

Jones told Plymouth Magistrates Court he shared the meme with colleagues in a WhatsApp group as a “humorous” and “lighthearted” response to the conversation.

But when one of his colleagues within the group made a complaint about the image being “inappropriate”, Jones became the subject of an investigation by the IOPC.

The investigation concluded in October last year that the image that Jones had sent was of a “grossly offensive” nature – and the charge was sent to the CPS.

But Jones, who has worked for Devon and Cornwall Police for over 23 years, told the court he did not believe the image was “grossly offensive” – but “amusing”.

He said: “The meme relates to Mr Joubert. It is a Wardy Joubert meme, it is not a George Floyd meme.

“The nature of the meme is that it is surreal. It is absurd.

“I know that the meme was going viral at the time, and that myself and my colleagues within the group had seen it in various shapes and forms.

“I suppose I kind of looked at it as like a storyboard – this meme does the rounds, it appears in various locations.

“We had seen previous incarnations of it as a naked man sitting next to Donald Trump as he made a speech, or being pushed in a wheelchair by Captain Sir Tom Moore when he was doing his fundraising.

“When I saw it on my iPhone 7 screen, I simply saw it as the latest incarnation of this funny meme that shows up in various ridiculous locations.

“At the time that I sent it, I looked at it, and I saw the comedy value in it. I find it amusing because of the ridiculousness of where he turns up.

“I saw that some people in the WhatsApp group responded almost immediately with laughing emojis, and I thought the joke had landed, and thought nothing more of it.”

“I saw the comedy in it because I find the meme amusing and the character amusing.

”I guess I was just after a cheap laugh and trying to raise a smile, I didn’t think about it deeply and didn’t look at the image in any great detail.”

And Jones argued that he did not believe the image to be of a “grossly offensive” nature.

He told the court: “I don’t consider image to be grossly offensive, no matter who looks at it.

“But I have looked in more detail at what is classed as grossly offensive, and I think the bar is set pretty high.

“It is deliberately set high because it ties in with freedom of expression, so as not to catch people like me who have shared a joke in bad taste.

“We don’t want to run the risk of criminalising tens of thousands of people who have also shared this content in just bad taste.

“I think it needs to be more than shocking, disturbing, or offensive – and I just don’t believe this image crosses that threshold.”

The court was also played a video interview conducted by the IOPC on July 24, 2020, during the body’s investigation.

The interview heard that the image had been sent by Jones at 7.59pm on May 30 on the WhatsApp group, which included eight other members.

Jones said in the interview that he had shared the meme in response to a conversation about a boat trip that a few members of the group were planning.

He said: “I think I was trying to be humorous in response to the invite.

“It would have been better placed if I could have superimposed the meme on to the back of a boat – but I do not have those technical skills.

“But I trusted that it was a conversation in which the people would recognise the meme from where it had appeared in various locations.

“I know it is no excuse, but I was on a period of annual leave, I had had a few drinks, and it was a clumsy attempt at humour.”

Jones added that he had been aware of the broad circumstances surrounding Mr Floyd’s death – but that he had not read too much into it.

He said: “If I had spent more than a few minutes thinking about it, I would not have shared it.

“I had not seen the sad footage of Mr Floyd’s death – maybe if I had seen it and had followed more closely I would not have shared the image.

“A lot of people did not realise what was coming down the line with the Black Lives Matter protests all over Britain – it blindsided me.

“If I had paid more attention, I would have joined the dots.

“Obviously, now, looking at the events that followed, the image takes on a different meaning and significance that I did not realise at the time.

“But I can assure you there was nothing sinister meant by it – nothing political, racial, or provocative on my part.

“I made a snapshot decision based on seeing the comedy value and the absurdity of this latest incarnation of a popular Internet meme.”

Mr Jones also told the IOPC that he believes he has been a “credit” to Devon and Cornwall Police over the past 23 years, and that he has “never been in trouble before”.

He said: “I know my integrity and professionalism will be questioned as a result of this incident.

“But this was an off-duty incident, and I do not believe my role as custody sergeant is relevant. I dropped my guard, I made a mistake.

“I think I’ve been a credit throughout my career – I have had a long service medal, and various letters of thanks from my superiors.

“I believe they will back me up in saying I’m a professional person.

“I deeply regret my actions. It was stupid of me, and I overstepped a mark on this occasion.

“I wouldn’t like to think that my record as a police officer will be forever blemished by this incident.”