Mohiussunnath Chowdhury allegedly drove at police outside the palace then reached for a four foot sword and repeatedly yelled “Allahu Akbar” when tackled by officers, it is alleged. 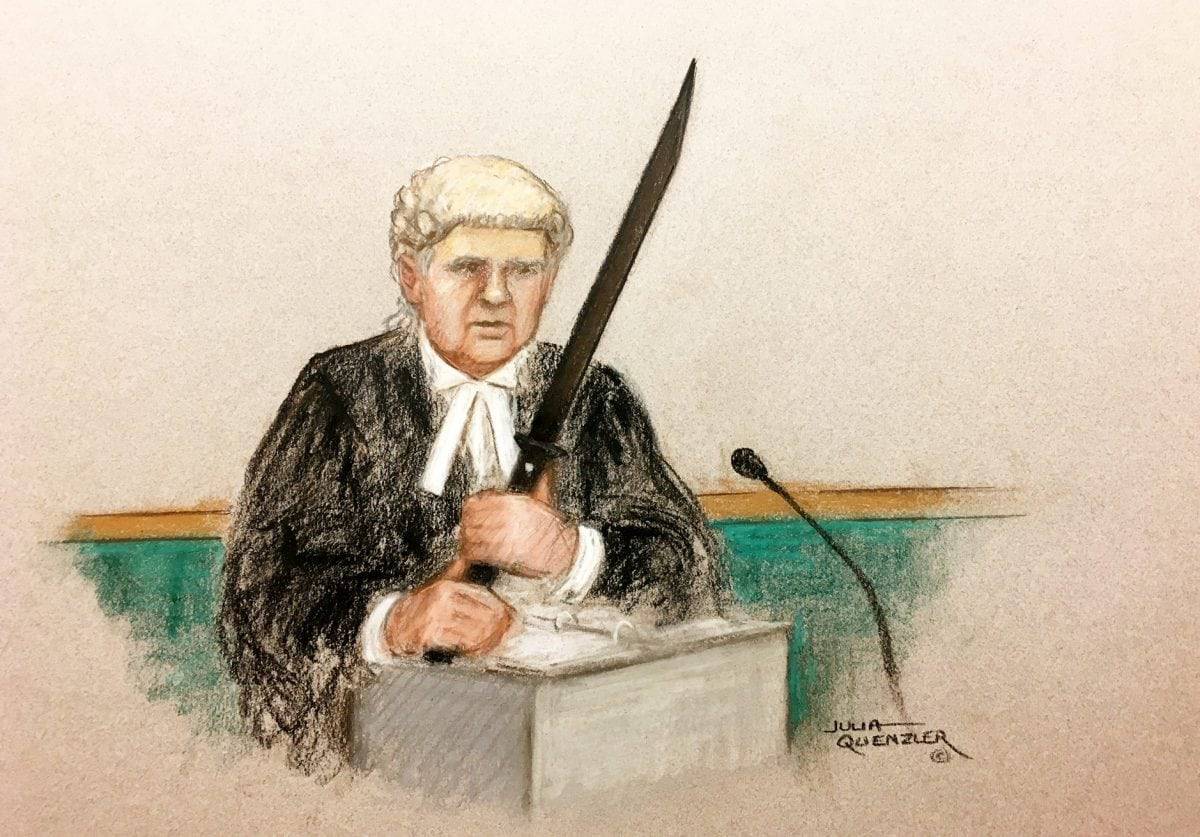 Brave police officers grappled with a sword-wielding ISIS supporter in his uber cab after he had rammed their van outside Buckingham Palace, a court heard today.

Mohiussunnath Chowdhury exchanged punches with officers as he tried to pull out the four foot samurai sword in a planned suicide attack, the Old Bailey was told.

Chowdhury drove at police outside the Palace repeatedly yelling “Allahu Akbar” when tackled by officers who eventually overpowered him with CS spray, jurors heard.

Two officers were left with cuts to their hands following the attack at around 8.30pm on August 25 last year, just months after the London Bridge attack which left eight dead.

Chwdhury wanted to attack police outside Buckingham Palace with a Samurai sword because he hated the Queen and “her soldiers”, a court heard.

The 26-year old drove into the path of a marked police van in a blue Toyota Prius on Constitution Hill at it was said.

As officers approached his vehicle he reached for the sword and yelled “Allahu Akbar” before he was subdued by with CS gas.

Three hours before the attack Chowdhury left a suicide note on his sister’s laptop before driving to the Palace saying he wanted to attack the Queen and “her soldiers”.

The note read: “By the time you read this note I will be in paradise with Allah.

“Tell everyone that I love them and that all should struggle against the enemies of Allah with their lives and property.

“The Queen and her soldiers who all burn in the Hell fire. They go to war with Muslims around the world and kill them without any mercy.

“They are the enemies that Allah tells us to fight.”

He then went to a Sainsbury’s and bought a sharpening tool to use on the sword.

In the months before the alleged attack Chowdhury “self radicalised” by watching beheading videos and declaring his support for ISIS. 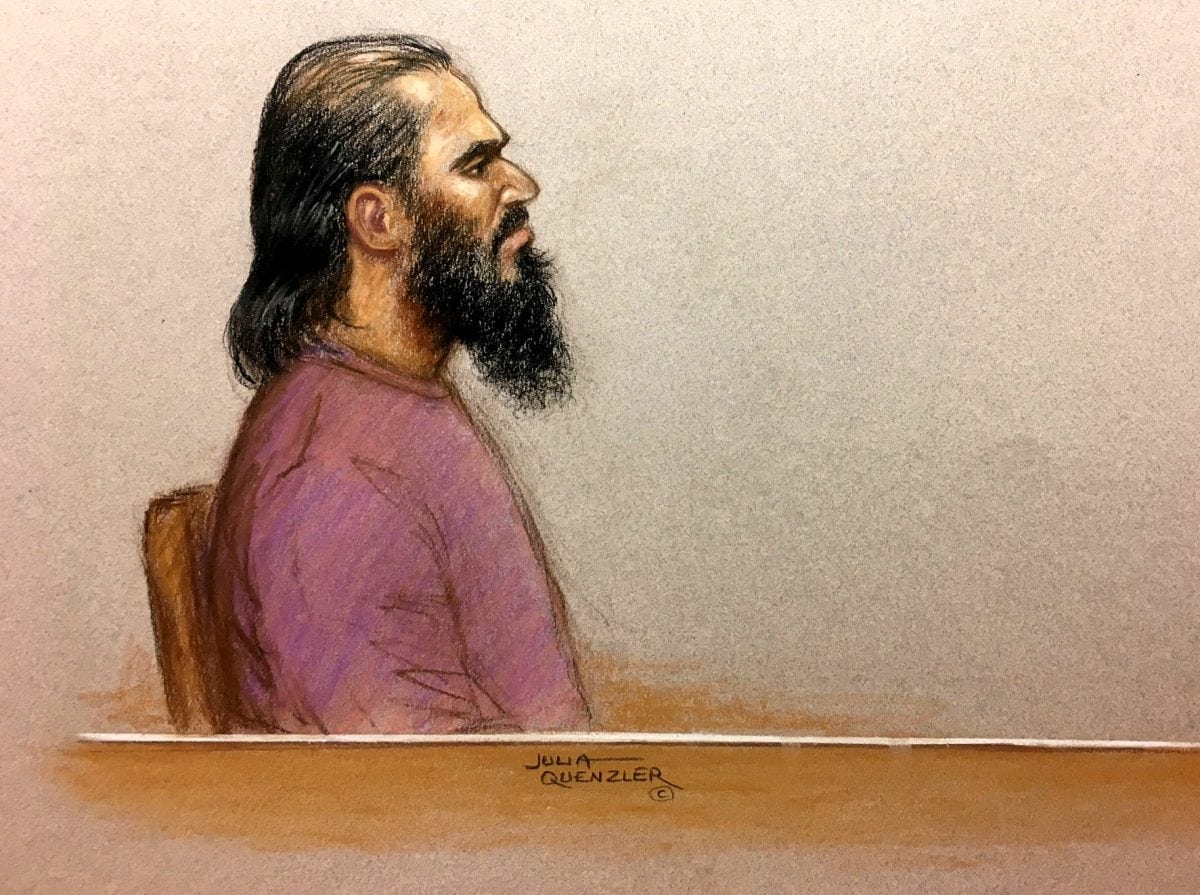 UK citizen, Chowdhury was charged with preparing an act of terrorism, by buying the Samurai sword and a knife sharpener.

At the Old Bailey today (Mon) he sat in the dock wearing a dark red jumper and now sporting a beard and long hair, he smiled and waved to family members in the public gallery when he was brought into court from the cells.

Timothy Cray prosecuting told jurors the defendant “sharpened and honed” the weapon before he left his home on August 25 last year.

He said: “The defendant was driving his motor car just outside Buckingham Palace in central London.

“Coming down the other way was a marked police van coming from Charing Cross Police station.

“The defendant swerved his car through traffic cones into the path of the van.

“The officers initially thought he was drunk or on drugs.

“But as the investigation was to prove, we say, this defendant had something far more serious in his mind.

“Three hours before he left a note on his sister’s laptop at the family home.

“He was planning to get to paradise by becoming a martyr, fighting the enemies of Allah.

“These officers were not special terrorism officers or armed officers.

“They didn’t know they were approaching a man armed with a sword, he was going to be a martyr and express hatred to the Queen and her soldiers – in his mind that included the police.

“It was only due to the bravery and quick reactions of police he was stopped from doing something even more serious.”

As officers got to the side of the car they heard him say “it’s all a bit f***** up”, before he reached back to take the black-handled sword from its sheath.

“PC Ian Midgley managed to get into the passenger side and stop him from getting the sword out from its sheath.

“A desperate struggle with officers followed while he was punching at them and they were punching at him.

“All the while this was happening he was shouting the words ‘Allahu Akbar’ over and over again.

“By this time the officers believed they were getting a terrorist attack.

“This was just six months after the murders with a car on Westminster Bridge and the attacks on London Bridge three months later.

“So now they have a man in a car in London in one of the most prominent locations with a sword attacking police officers.”

After the CS spray was used the weapon was taken from the defendant, the court heard.

It is understood that no members of the royal family were in Buckingham Palace at the time, with the incident sparking a large evacuation around the palace, St James’s Park and The Mall.

Mr Cray added: “There’s no doubt in the interview with police he confessed that he had planned to confront the police as he saw them as people who do the dirty work of the UK government.

“He agrees he had a sword, he agrees he said what he said about the Queen, her soldiers and police.

Mr Cray held the large sword in front of the jury to show the size of the weapon.

Jurors were told the defendant came from an educated background and started an English degree before dropping out and becoming an Uber driver in London.

But months before the alleged attack Chowdhury began searching for ISIS beheading videos in the wake of the Westminster and London Bridge attacks.

He also discussed the attacks on WhatsApp, praising the attackers and adding, “I support ISIS”.

Mr Cray added: “He became more interested in terrorism looking for videos of beheadings in Chechnya and by ISIS in the Middle East as well videos of as Jihadi John.

“This self-radicalisation was something he chose for himself. He did not come from a troubled part of the world, he came from an educated background.

“He told one of his friends who tried to talk him out of it ‘I’m already radicalised’.

“He also sent emojis of an Arabic-looking figure, a knife and soldier.

“There’s loads of evidence he hated the UK and he’s said he was going to stand up the the enemies of Allah.

“On WhatsApp chats he said ‘the U.K. government was a Zionist force’ and all who protect the Zionist law is an enemy of Allah.”

The court also heard Chowdhury changed his WhatsApp profile picture to a green bird just before the attack – a reference to martyrdom, the prosecution say.

Chowdhury claims he only wanted to get himself killed during the attack.

His sister became concerned about his views on Islam when he suggested watching Channel 4 drama The State about British-born ISIS fighters, the court heard.

Mr Cray said: “The crown suggest that his claims he only meant to kill himself is simply untrue or so far from the truth that is makes no difference. Why would he sharpen the sword if he didn’t meant to kill anyone else.

“We say this defendant did absolutely everything he could to prepare for an act of terrorism.

“In fact there is a clear possible evidence he did bring terror to the streets of London by trying to attack police officers right outside Buckingham Palace.”

Chowdhury denied one count of preparing a terrorist act.