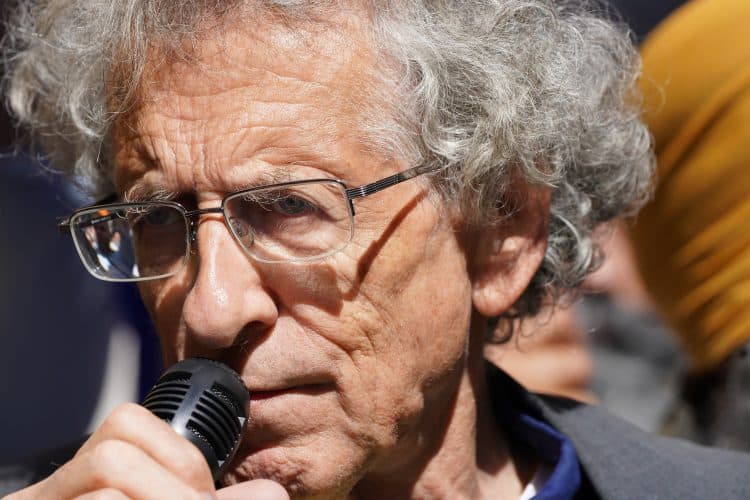 Piers Corbyn speaks to members of the Sikh community outside the Indian High Commission at India House, London, during a demonstration showing solidarity with farmers protesting on the streets of Delhi to mark India's Independence Day. Picture date: Sunday August 15, 2021.

Piers Corbyn has been criticised for exploiting the court case of Sarah Everard’s murder to protest against coronavirus restrictions.

The anti-lockdown activist – brother of former Labour leader Jeremy Corbyn – demonstrated outside the Old Bailey on Thursday as a Metropolitan Police officer was handed a whole life sentence for the kidnap, rape and murder of Everard.

Wayne Couzens used his warrant card and handcuffs to falsely arrest the 33-year-old marketing executive under the pretence of Covid laws; she had been visiting a friend for dinner in south London.

In front of a gaggle of journalists, Corbyn complained about the “fake Covid narrative” and claimed the media were to blame for supporting coronavirus “tyranny”.

One member of the public reportedly approached Corbyn and shouted: “How dare you hijack Sarah’s death for your own cause”.

A reporter at the scene described Corbyn’s actions as “staggeringly inappropriate”.

Channel Four News reporter Anja Popp tweeted that she had asked one of Corbyn’s fellow protestors if he thought “they were being respectful to Sarah Everard’s family inside”, to which he responded: “yes I do, God bless you.”

In his sentencing on Thursday, Lord Justice Fulford said the case in which a serving officer abused his position was so exceptional it warranted a whole life order.

Couzens, 48, stood shaking slightly in the dock as he was sentenced, but did not lift his head to face his victim’s family, who calmly looked on from the well of the court as he shuffled out of court.

Everard’s parents, Jeremy and Susan, clasped hands and hugged police officers after he was taken down to the cells.

Later, they issued a statement saying they were pleased with the sentence, adding: “Nothing can make things better, nothing can bring Sarah back, but knowing he will be imprisoned forever brings some relief.

“Sarah lost her life needlessly and cruelly and all the years of life she had yet to enjoy were stolen from her.

“Wayne Couzens held a position of trust as a police officer and we are outraged and sickened that he abused this trust in order to lure Sarah to her death. The world is a safer place with him imprisoned.”