"Beautiful music, which only serves as a counterpoint to the harsh, ugly circumstances forced on these peaceful, freedom-loving people. They don't deserve what's happening to them; it's just tragic." 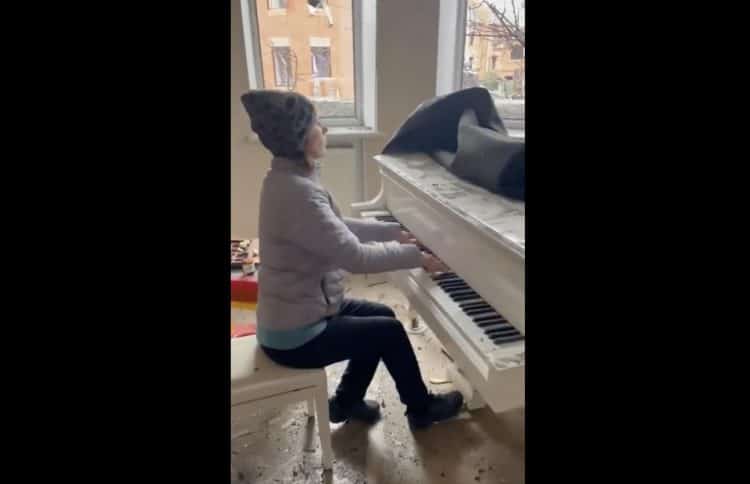 A heartbreaking video shows a Ukrainian pianist playing the piano one last time before fleeing her home south of Kyiv.

Irina Maniukina, who has two children, can be seen in her home, which had been wrecked amid the war with Russia.

Maniukina performs a bit from Schubert’s Impromptu Op. 90 No. 2 before quickly moving to Chopin’s Aeolian Harp Etude Op. 25 No. 1, just as her daughter films the home’s ruined doors and windows.

Among the rubble, a few pairs of shoes seem to be the only objects other than the piano which defiantly stayed intact after the bombing.

Thousands have reacted to the video, with many noting the scenes are reminiscent of The Pianist, a famous biographical war drama film which won Oscar awards. The film is based on a memoir by Polish-Jewish pianist and composer Władysław Szpilman.

And Composer Howard Goodall said the video also reminds of the November Uprising, also known as the Polish-Russian War in 1830.

“Particularly poignant that Irina played Chopin, who left his homeland Poland as it (with Lithuanians and Ukrainians) rebelled against and was then crushed by the Russian empire,” Goodall said.

“Oscar-winning films have used the same images: broken glass, tiny shoes, abandoned piano. But this is real and now,” one Twitter user said.

Another added: “Heartbreaking, strong echoes of The Pianist. I hope that unlike Władysław Szpilman however, it doesn’t take Irina six years to return to Kyiv to play again…”

A third commented: “Beautiful music, which only serves as a counterpoint to the harsh, ugly circumstances forced on these peaceful, freedom-loving people. They don’t deserve what’s happening to them; it’s just tragic.”

‘I remembered events in our house with a smile’

According to Metro, Maniukina’s daughter, Karina, said the performance helped her “remember events in their house with a smile”.

She said: “It wasn’t a sad moment. My mother just wanted to let go of unnecessary thoughts, and I remembered events in our house with a smile.

“She wanted to forget about the war and her worries for our safety. She’s been playing all her life and she even graduated as a pianist.

“Since there was a lot of ash and dust in the keys and everyone was in a state of shock, she could not play for a long time.

“After the video we called our friends and began to clean the house from glass and damaged furniture, and took out all the things that were left.”

Karina said a bomb was dropped around 10 metres from their home, whilst she was in the kitchen having made pancakes.

She added: “After the explosion, everything was smashed and in ashes. I looked around the house and saw that a fire was starting in my brother’s room.

“I had already called my mother and they rushed as quickly as possible. They couldn’t drive straight to the house. Since the wires just lay on the road.

“They ran into the house and all together ran to put out the fire. After that, everyone breathed a sigh of relief, and my mother decided to gather her thoughts and sit down at the piano.”