‘This property has been liberated’ and ‘power breed parasites’, read the other banners. 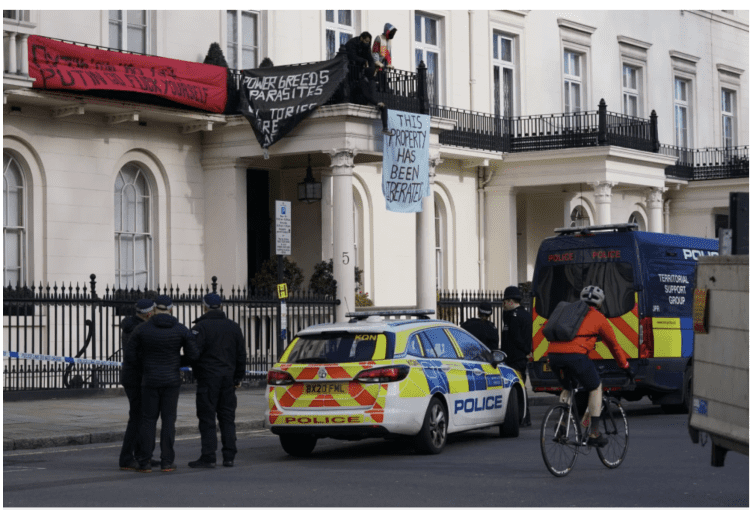 Squatters have occupied the central London mansion of a Russian billionaire sanctioned by the UK Government for his links to Vladimir Putin.

Banners on the £25,000,000 property in Belgrave Square, near Knightsbridge, read: ‘This property has been liberated’ and ‘power breed parasites’.

A Ukrainian flag is also hanging from the scene, while two men have been pictured on the balcony with their fists raised.

The mansion belongs to Russian oligarch Oleg Deripaska, who has stakes in energy and metals company En+ Group.

Asked about reports in the Daily Mail that he would like to seize Russian oligarchs’ mansions and use them to accommodate people fleeing the war, he told the BBC’s Sunday Morning programme: ‘I want to explore an option which would allow us to use the homes and properties of sanctioned individuals – as long as they are sanctioned – for humanitarian and other purposes.’

He added: ‘There’s quite a high legal bar to cross and we’re not talking about permanent confiscation.

‘But we are saying: “you’re sanctioned, you’re supporting Putin, this home is here, you have no right to use or profit from it – and more than that, while you are not using or profiting from it, if we can use it in order to help others, let’s do that”.’

Related: Watch: Khan compares PM to ‘Comical Ali’ after claims UK have taken more refugees than any other country in Europe