Freelancer Andy Aitchison was arrested by police on suspicion of criminal damage after reporting on the demonstrations outside Napier Barracks in Folkestone, Kent. 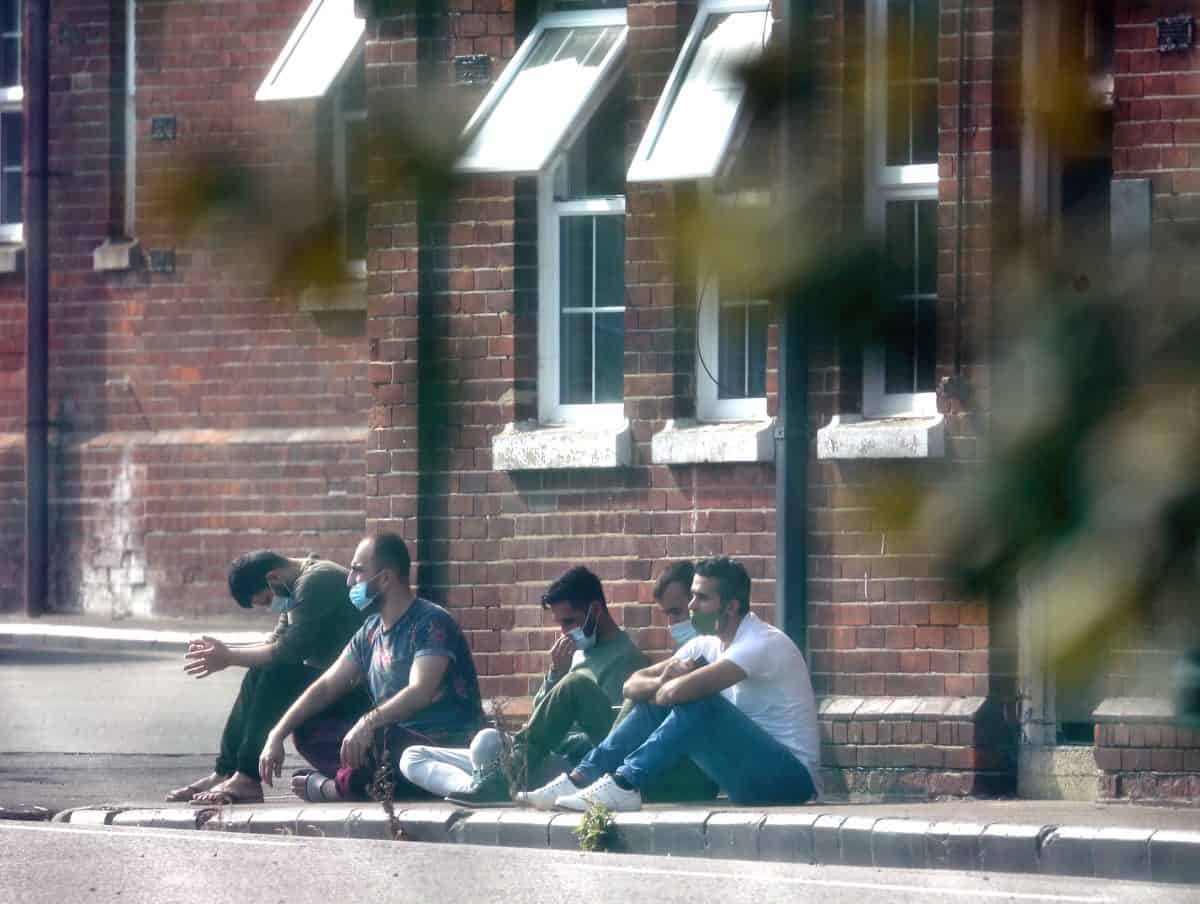 A group of men, thought to be migrants, sit outside in the sunshine after arriving yesterday night at Napier Barracks in Folkestone, Kent. Migrants will be housed in the military barracks from this week while their asylum claims are processed.

A photographer is “deeply concerned” about the freedom of the press after he was hit with an “unlawful” coronavirus fine for reporting on a protest outside a former Army barracks being used to house asylum seeker.

Freelancer Andy Aitchison was arrested by police on suspicion of criminal damage after reporting on the demonstrations outside Napier Barracks in Folkestone, Kent.

During the protest, demonstrators threw fake blood at the barbed-wire topped gates of the controversial site, which has been the site of a Covid-19 outbreak and criticised for the demeaning conditions in which asylum seekers are held.

Following his arrest Aitchison was detained for a number of hours, interviewed and released on conditional bail – and instructed not to go to Napier Barracks, his lawyers said.

Police later refused charges on 5 February but days later he was handed a Fixed Penalty Notice, which Kent Police has now said was issued erroneously, his lawyers said on Thursday.

They said the fine was “unlawful” and criticised what it called a “flagrant disregard of all journalists’ ability to report on events”.

Earlier this week it emerged that ministers were warned against housing asylum seekers at the barracks during a pandemic – months before it was hit by a coronavirus outbreak.

Aitchison, 46, said he was “really relieved” that the fine had been dropped, saying it had felt “unbelievable” that it was issued in the first place.

He added: “This was an unnecessary stress and concern for myself and my family and cause for concern for all journalists.

“I am still deeply concerned about the freedom of press during these unprecedented times and wonder how many other journalists have been incorrectly issued with these fines, especially as there was no clear mechanism to appeal the fine.”

General secretary of the National Union of Journalists, Michelle Stanistreet, said: “We are still waiting for an apology for Andy from Kent Police and the force still has questions to answer.

“It needs to explain why Andy, who was acting completely within his rights and just doing his job, was wrongly arrested and wrongly had his journalistic material taken.”

A Kent Police spokesperson said: “On 28 January 2021 Kent Police officers arrested a 46-year-old man following reports of criminal damage in the area of Napier Barracks and following an investigation he was released without charge.

“A Fixed Penalty Notice was initially issued which has been reviewed and rescinded.”

In a hearing earlier this week, a judge ruled that claims by five asylum speakers that Napier Barracks were inadequate should be considered in a judicial review.

Lawyers acting for the asylum seekers argued that the dormitory accommodation lacks privacy and decent toilet facilities. Tom Hickman QC, representing three asylum seekers, said many residents were “vulnerable” and had “mental health problems, which arise from the circumstances in which they left their country of origin and their journey to the UK”.

A two-day judicial review will begin on 13 April.