“Our society is facing significant threat, and we all need to do what we can both at an individual and societal level to improve our long term prospects as a species." 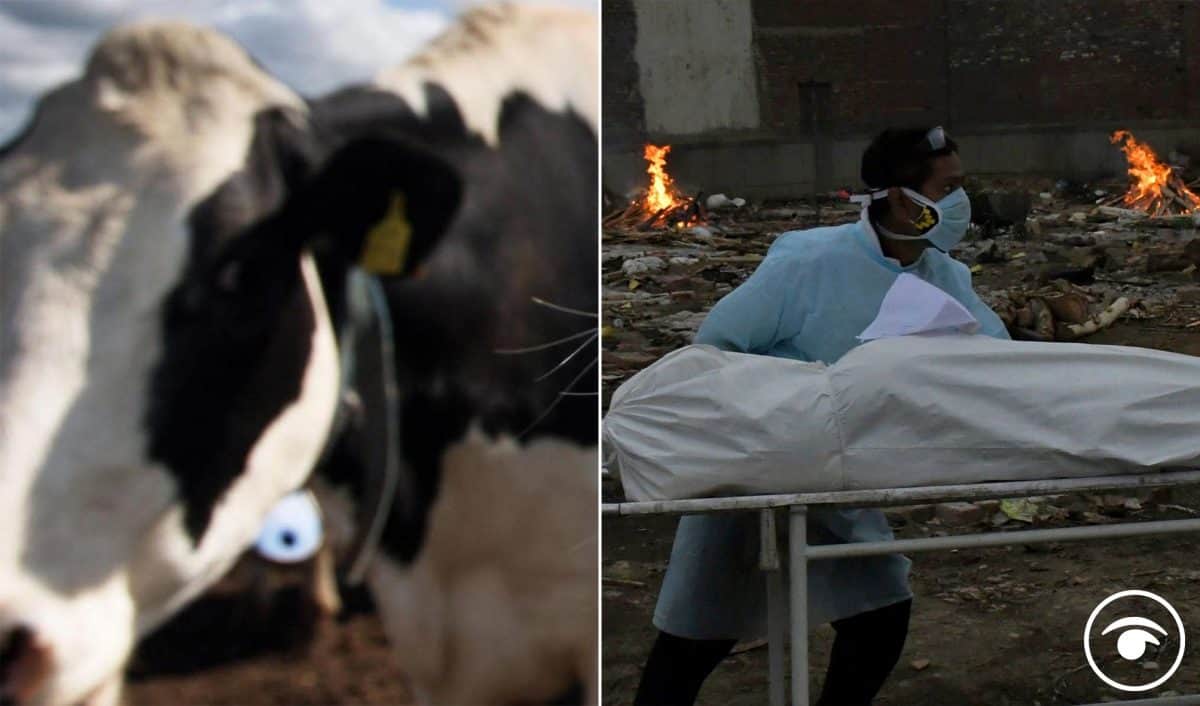 The world’s vast population of people, pets and livestock, and the pressure we put on wildlife, have created the “perfect storm” for pandemics, a researcher has warned.

It comes as Indian prime minister Narendra Modi is facing growing pressure to impose a nationwide lockdown amid a coronavirus surge as experts ponder the effectiveness of restrictions imposed by individual states.

Many medical chiefs, opposition leaders and some of the supreme court judges have suggested the lockdown seems to be the only option with the virus raging in cities and towns, where hospitals are forced to turn patients away while relatives scramble to find oxygen.

Crematoriums and burial grounds are also struggling to handle the dead.

On Friday, India recorded a new record of 414,188 confirmed cases in the past 24 hours.

Its tally has risen to more than 21.4 million since the pandemic began with faint hopes of the curve going down quickly.

The health ministry also reported 3,915 additional deaths, bringing the overall total to 234,083. Experts believe both figures are an undercount.

The official daily death count has stayed at more than 3,000 for the past 10 days.

There is an urgent need to control the evolution and transmission of diseases such as the virus that causes Covid-19 by using vaccine passports, boosting the genetic variation in livestock and reducing how much meat we eat.

In an editorial published in the journal Virulence, Prof Cock Van Oosterhout, from the University of East Anglia, also warned of the need to halt the loss of natural habitats in wildlife-rich areas, to reduce human-wildlife conflict and prevent diseases spilling over into people and livestock.

Prof Van Oosterhout, professor of evolutionary genetics at UEA’s School of Environmental Sciences, said: “We humans have been living in a non-sustainable way over the past few centuries.

“We now have a vast population size – not only of humans but also of domesticated animals and livestock.

“This makes an ideal breeding ground for the evolution and transmission of zoonotic infectious diseases that jump from an animal to a human host.”

The article highlights how the total biological mass of the world’s livestock is more than 10 times higher than that of all wildlife combined, but the genetic diversity is far below what is needed.

Genetic variation is critical to counter the evolution of infectious diseases.

But due to centuries of selective breeding, livestock have become severely inbred, with the genetic variation present in 150 breeds of sheep and cattle equivalent to a gene pool with an effective population size of 52 animals.

That is 80 times lower than what is thought to be the minimum viable population size for free-living species, the article warned.

Urgent action is needed to restore the genetic diversity of farmed and domestic animals, as livestock has become a “sitting duck” in an arms race with emerging infectious diseases.

Prof Van Oosterhout warned people need to cut back on meat and dairy to reduce livestock numbers, pointing to how methane from cattle and sheep contributes to global warming and to the dangers of antibiotic resistance, as well as the risk of pandemics.

He also backed the use of vaccine passports – and said compulsory vaccination may need to be considered – to break transmission chains and stop variants evolving.

And he said: “Habitat destruction, illegal wildlife trade and other human activities have brought many species into contact with each other – and this facilitates a spill-over, spillback and hybridisation of the pathogens.

“Given that we are in close contact with our domesticated animals and livestock, there are many opportunities for the spill-over of viruses from animals to humans, and spillback from humans back to animals.

“Altogether, these conditions have created a perfect storm for the evolution and transmission of zoonotic infectious diseases.”

He said humans were not immune to the evolution of pathogens.

He warned: “Our society is facing significant threat, and we all need to do what we can both at an individual and societal level to improve our long term prospects as a species.

“These changes need to be implemented globally to effectively combat pandemics,” he added.