Storm Corrie made life difficult for pilots landing at the UK's busiest airport on Monday. 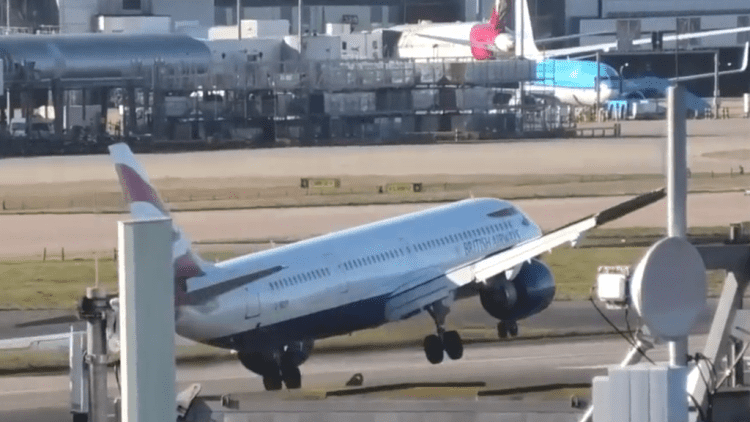 British Airways has praised its pilots after one of the company’s Airbus A321 airliners was forced to abort its landing at Heathrow Airport on Monday when faced with strong winds as a result of Storm Corrie.

Footage shared by Big Jet TV showed the aircraft initially touching down on the runway, before banking sharply to the left.

The aircraft can then be seen beginning a go-around procedure, meaning it will climb back away from the runway and re-attempt the landing.

As the aircraft’s nose is raised, the tail can be seen coming close to the runway’s surface, in what was described as a “tail strike” by the video’s recorder.

British Airways declined to say whether the aircraft experienced a tail strike. In a statement, a spokesperson said: “Our pilots are highly trained to manage a range of scenarios, including extreme weather conditions, and our flight crew landed the aircraft safely.”

The spokesperson added: “Our customers and crew all disembarked as normal.”

The aircraft flew again later that day, completing a flight to Geneva and back.

“Happens all the time”

An Airbus A320 pilot, who wished to remain anonymous, told the PA news agency it was a “standard incident which happens all the time”.

“If there is any doubt you go around…(it) doesn’t even have to be bad weather. If it looks as though you are not going to land in the touchdown zone you go around,” they said.

Storm Corrie brought wind speeds of up to 90mph to the UK, leaving thousands of homes without power.