President Trump has embarked on the 2020 election campaign, gleefully deflecting attention from any further investigations of his affairs by going on the offence ‘bigly’. In a rally in Wisconsin this weekend he whipped up his crowd of MAGA hat wearing followers by offending just about everyone from the “sick” news media to “scum” FBI […] 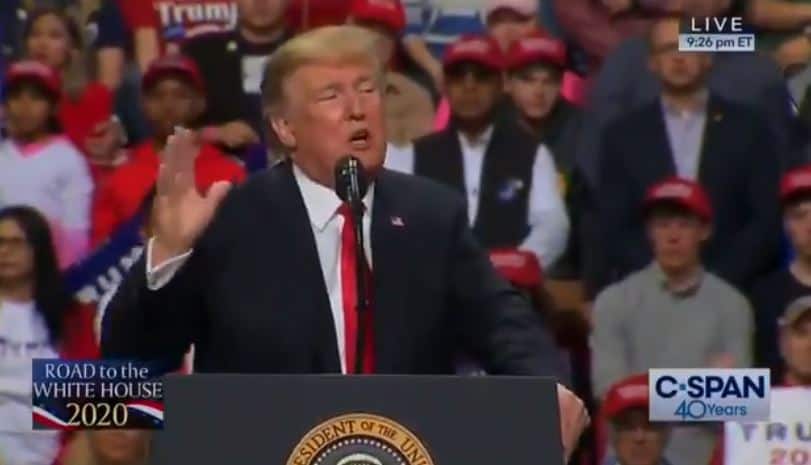 President Trump has embarked on the 2020 election campaign, gleefully deflecting attention from any further investigations of his affairs by going on the offence ‘bigly’.

In a rally in Wisconsin this weekend he whipped up his crowd of MAGA hat wearing followers by offending just about everyone from the “sick” news media to “scum” FBI investigators.

In a rambling rant that was demented even by his standards, he turned to a myth he’s peddled before – that Democrats are “aggressively pushing extreme late-term abortion, allowing children to be ripped from their mothers’ womb right up until the moment of birth.”

This time, picking at the abortion scab to marshal his pro-life against the Democrats, he went even further, imagining the following scenario in front of his rapt audience: “The baby is born, the mother meets with the doctor, they take care of the baby, they wrap the baby beautifully, and then the doctor and the mother determine whether or not they will execute the baby. I don’t think so.”

In a bizarre departure from facts by even Trump’s standards, he appeared to be refer to the harrowing experience of having a baby who cannot survive outside the womb by alleging a conspiracy between mother and doctor to “execute” a newborn baby.

Needless to say, Trump’s inflammatory comments were seized on by lawmakers, lawyers and medics incensed by his latest dangerous misinformation and despairing at having to point out that murdering babies is still illegal and always has been.

That’s why when in February, the Senate took up a bill backed by anti-abortion advocates called the “Born-Alive Abortion Survivors Protection Act” it did not pass as legislation already forbids killing babies.

And in a thread that has now gone viral nurse Julia Pulver described how the scenario the President of the United States claimed was a gleeful conspiracy actually goes down in the heartbreaking occasions that a baby’s life cannot be saved.

“NO ONE ever, in any hospital, nor any mother who has just given birth, is conspiring with a doctor on whether or not to commit infanticide. This is perhaps one of the sickest accusations levied by this deranged dictator yet. Don’t believe a word he says about anything important.”

The Misogynist-in-chief’s latest unhinged episode would be laughable, if it were not part of a pattern of anti-choice moves to strip women of bodily autonomy by any means necessary, that have included the United States watering down a UN resolution on rape in conflict to remove any mention of sexual or reproductive health and stop a working group on ending sexual violence.

Of course, the President of The United States did not always pander to pro-life evangelical support, having previously championed a woman’s choice over abortion before he through his hat into the Republican ring as a Presidential candidate.