There were calls for an ‘honorary damehood’ for 'ice-cool' Dutch coach Sarina Wiegman. 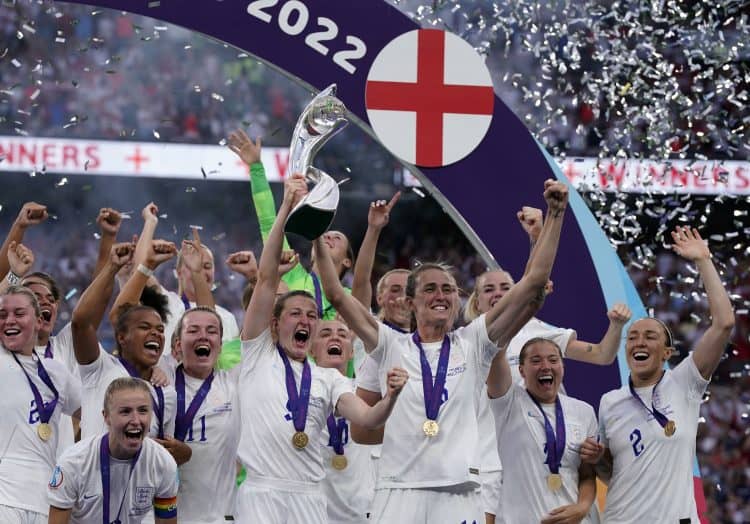 The national newspapers anticipate further celebration by fans after England defeated Germany in the Euros final at Wembley Stadium.

An “honorary damehood” for victorious coach Sarina Wiegmann is proposed by one, while another admires the side’s “unbridled enthusiasm and dignity”.

“The Lionyesses” are praised for “making herstory” as The Sun dedicates its first five pages to coverage of the match.

Inside, the paper’s editorial says there is only one word for the moment when substitute Chloe Kelly wildly celebrated her late goal to break German hearts and inspire a new generation of players – “Wunderbar!”

The Times also fills its first five pages with the match, which it said kicked off “jubilant scenes in the land of hope and (finally) glory”.

“Never mind 56 years of hurt, how about three-and-a-half weeks of pride and joy?” the editorial asks.

“How about an honorary damehood for the ice-cool Dutch coach, Sarina Wiegman?

“Over these past few magical weeks, star-struck young dreamers have been inspired, quite a few hardened old sceptics have been won over, and the bulk of the nation has simply been entertained and enthralled by the magnificent young women in white.”

The Guardian’s front-page headline calls the Lionesses “Game changers”, while the i says the country “bursts with pride” at the “valiant” side.

Across its page 4 and 5 spread, the Daily Mail touches on the history-making effort with a headline saying: “In one match they wiped out decades of frustration.”

“What a match! What a team!” the paper’s leading article adds.

“What brilliant role models these remarkable young women are. They have united the nation this past month in pride and admiration with their dazzling talent and sense of fair play.”

The editorial continues: “We must hope schools now play their part and get more girls involved in the game.”

The Daily Express also expresses hope for the future of the game.

The paper calls the team the “pride of nation” in its page 2 and 3 spread, with the editorial saying the Lionesses provided the “perfect tonic” to a country laid low by the pandemic and the cost-of-living crisis.

“But there’s more to it than that,” it said. “This team, including its serene Dutch coach, has conducted itself with unbridled enthusiasm and dignity – and what they have achieved will work wonders for women’s sport.

“The atmosphere in the stadium was electric – a family occasion, sport at its absolute best. It’s come home at last.”

The Voice of the Daily Mirror says the win was “something much more” than just a sporting distraction.

“The Lionesses lived their own dreams but they will also inspire the masses watching in stadiums and on TVs in pubs and homes,” the page 8 piece states.

“Women’s football across Britain is growing fast and many more will hopefully take up the sport, encouraged by the wonderful role models they saw on the pitch.

“In a miserable era of the worst cost-of-living crisis for decades and a dispiriting Conservative Party squabble over the premiership, the Lionesses are a shining ray of light.”

The Daily Star keeps one eye on history as it says it “feels like this is just the beginning” for the side.

“Both on the pitch and off it, they have shown real class. No egos or attitude here, just a united group of top professionals who have proved the sexists wrong.

“Back in ’66 a man famously said ‘They think it’s all over… it is now!’ For the class of ’22, it feels like this is just the beginning,” the paper’s leading article concludes.

The Daily Telegraph dedicates almost half of its front page to a photograph of the Lionesses celebrating their victory, while the Queen’s praise leads the splash on page 2.

Further in, under the headline “A woman’s game” the editorial notes “there are similarities with the men’s game but the big difference is this: the women won”.

The Sun echoes a similar sentiment on its front page, with its headline stating: “Move over fellas – it’s home!”