“It will pour fuel on the climate crisis and be deeply damaging for the UK’s reputation as a ‘climate leader.'" 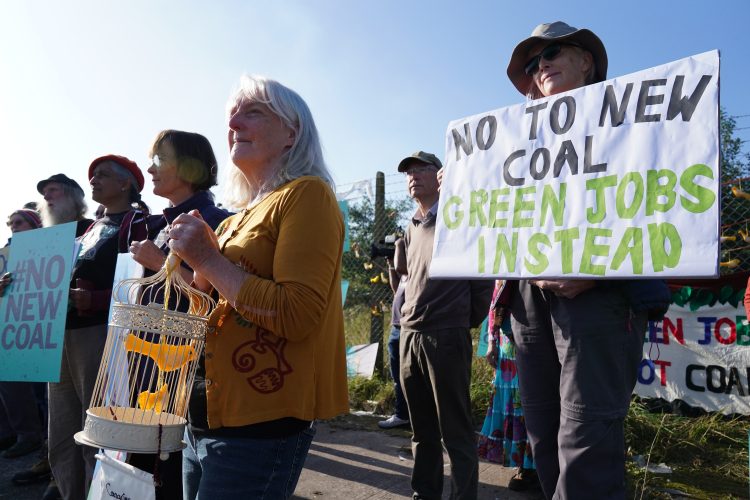 Campaigners have warned a new coalmine for steel production would be a “monumental mistake” ahead of a decision on the project due shortly.

A target date of July 7 has been set to decide whether or not to grant planning permission for the coking coal mine near Whitehaven in Cumbria, following a planning inquiry in 2021, and officials said the decision would be made soon.

It is one of a series of decisions that test the Government’s approach to the environment and the “net zero” agenda to cut climate emissions, and which are due as Number 10 is engulfed in political turmoil.

They include a decision on granting the go-ahead for a new nuclear power plant, Sizewell C, in Suffolk, which is due on Friday.

And the Government is expected to respond to a British Geological Survey (BGS) report on fracking, which ministers commissioned amid criticism they had ruled out a homegrown source of gas in the face of the energy crisis.

The decisions are awaited as the Government publishes its new Energy Security Bill which it says will drive investment in clean technology and homegrown energy, and protect consumers.

It includes measures to explore the role of hydrogen to heat homes and buildings, scale up electric heat pump manufacturing and installation, extend the energy price cap, boost the nuclear industry and prevent industrial action and “malicious protest” from disrupting fuel supplies.

Ahead of the decision on the coal mine, Greenpeace UK’s policy director Doug Parr said its business case was “completely flawed” and it would add to the climate crisis.

“The coal is for steelmaking so it won’t help lower energy bills. The vast majority of it will also be sold across Europe so it won’t necessarily reduce imports of coking coal from elsewhere.

“It will pour fuel on the climate crisis and be deeply damaging for the UK’s reputation as a ‘climate leader’.

“Going ahead with it would be a monumental mistake, and epitomise the climate hypocrisy that nations already being hit by climate impacts regularly, and correctly, charge developed nations like the UK with,” he said.

The plans were labelled “absolutely indefensible” by Lord Deben, chairman of the Climate Change Committee, last month as he warned 80% of the coal would be exported and it would undermine the UK’s leadership on climate action.

But Environment Secretary George Eustice told the Times on Wednesday that coking coal was still needed, saying: “If we do need this coal in order to have a viable steel industry, then we might as well use our own coal and use our own gas rather than be reliant on other countries.”

And Boris Johnson added to speculation that the Government could approve the plans for the mine when he told the Commons last month that “plainly it makes no sense to be importing coal, particularly for metallurgical purposes, when we have our own domestic resources”.

Despite the controversy over the mine, and calls from some Tory politicians to scale back on climate efforts in the face of the energy and cost-of-living crises, ministers have insisted there will be no return to coal for electricity generation – with a full phaseout of coal power due by October 2024.

There had also appeared to be an end to the long-running saga over the controversial process of fracking for gas at the beginning of the year, when UK authorities ordered the only two shale wells – in Lancashire – to be plugged and abandoned

But Russia’s invasion of Ukraine prompted calls for all domestic energy sources to be explored, with the Government asking the BGS for a report on the latest science around fracking including new techniques, improvements in geological modelling or areas outside Lancashire less at risk of tremors.

A Government spokesperson said: “We’ve always been clear that the development of shale gas in the UK must be safe and cause minimal disruption and damage to those living and working nearby.

“We have received the British Geological Survey’s report on the latest scientific evidence around shale gas extraction and ministers are considering next steps.”

Friends of the Earth campaigner Jamie Peters said: “The Government is poised to make two key decisions that will have long-term implications on its determination to deal with both the energy crisis and the climate emergency.”

He said the evidence against a new coal mine was “overwhelming”, while fracking would blight local communities and do little to boost energy security or bring down bills.

“The best answer to the energy crisis is to end our reliance on fossil fuels by investing in the UK’s huge, homegrown renewable resources and a nationwide energy efficiency programme,” he said.

Related: Gary Lineker made comment about climate change and replies proved his point