The album’s cover star is asking for damages of at least $150,000 from each of the 15 defendants. 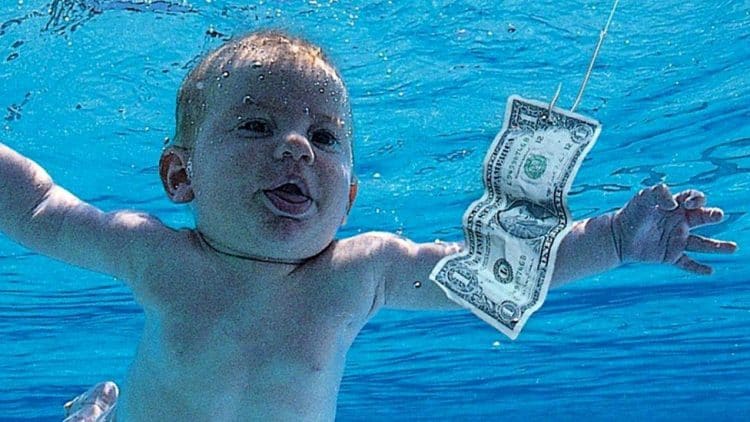 One of the biggest albums of the ‘90s, selling over 30 million copies worldwide, the grunge pioneers’ sophomore album features some of the band’s biggest hits, such as ‘Smells Like Teen Spirit’, ‘Come As You Are’, ‘Lithium’, and ‘In Bloom’, and also has an album cover that’s both particularly famous and unusual.

On the cover, four-month-old Spencer Elden is depicted completely naked in a swimming pool, grasping for a dollar bill dangled in front of him.

30 years on, Elden claims his parents never signed a release authorising the use of his image on the album, also suggesting the nude image constitutes child pornography. As such, he is asking for damages of at least $150,000 (£109,000) from each of the 15 defendants, including surviving band members Dave Grohl and Krist Novoselic, the managers of Kurt Cobain’s estate; Cobain’s former wife Courtney Love; photographer Kirk Weddle; and original Nirvana drummer Chad Channing, who wasn’t part of the group during the album’s recording or release.

On the album’s 25th anniversary, Elden recreated the album cover photo wearing swimming shorts and told the New York Post, “The anniversary means something to me. It’s strange that I did this for five minutes when I was 4 months old and it became this really iconic image.” Yet he also told Time Magazine that he “got a little upset” by his notoriety as he grew older.

“I just woke up already being a part of this huge project,” he told Time Magazine. “It’s pretty difficult – you feel like you’re famous for nothing.

“It’s hard not to get upset when you hear how much money was involved,” he continued. “[When] I go to a baseball game and think about it: ‘Man, everybody at this baseball game has probably seen my little baby penis,’ I feel like I got part of my human rights revoked.”

In 2008, Spencer’s father, Rick, recounted the photo shoot to NPR saying he’d been offered $200 to take part by photographer Kirk Weddle, who was a family friend. The photo is said to have been taken at a family party and used by Nirvana without consent. After the release, Geffen Records are alleged to have sent Spencer Elden a platinum album and a teddy bear.

Since the Nevermind’s release, the image has generally been understood as a statement of capitalism, featuring the digital imposition of a dollar bill on a fishhook. But while non-sexualised photos of infants aren’t generally considered child pornography under US law, Elden’s lawyer, Robert Y. Lewis, argues the inclusion of the dollar bill makes the minor seem “like a sex worker”.

According to the lawsuit filed this week in the U.S. District Court’s central district of California, “Weddle took a series of sexually graphic nude photographs of Spencer. To ensure the album cover would trigger a visceral sexual response from the viewer, Weddle activated Spencer’s ‘gag reflex’ before throwing him underwater in poses highlighting and emphasizing Spencer’s exposed genitals.

Fisher purchased fishhooks from a bait and tackle shop to add to the scene. At least one or more film cartridges were exposed in a short period of time which included at least 40 or 50 different image shots of Spencer. Cobain chose the image depicting Spencer — like a sex worker — grabbing for a dollar bill that is positioned dangling from a fishhook in front of his nude body with his penis explicitly displayed.”

The lawsuit also states: “Defendants intentionally commercially marketed Spencer’s child pornography and leveraged the shocking nature of his image to promote themselves and their music at his expense.”

Suffering “lifelong damages” as a result of the artwork

Spencer Elden also claims he “has suffered and will continue to suffer lifelong damages” as a result of the artwork, including “extreme and permanent emotional distress” as well as “interference with his normal development and educational progress” and “medical and psychological treatment”.

He also states that his “true identity and legal name are forever tied to the commercial sexual exploitation he experienced as a minor which has been distributed and sold worldwide from the time he was a baby to the present day”.

Representatives for Nirvana and their record labels are yet to respond to the claims.