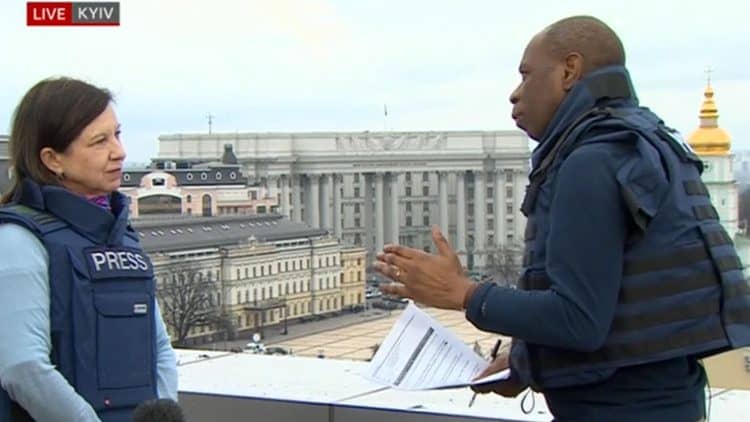 The BBC’s Clive Myrie has been praised for his fearless reporting from the ground in Kyiv – and now he has spelt out exactly why he and his colleagues are committed to remaining in Ukraine.

Myrie, 57, said there was “so much crap” online about Russia’s war – and spoke of the need to counter misinformation.

Speaking from an underground bomb shelter in the Ukrainian capital, Myrie said: “None of us are forced to come here.

“It’s part of our job. We all feel that we want to tell the story of this war and tell it accurately and fairly.

‘We want to represent them’

Referring to the people in the shelter with him, Myrie added: “We’re representing the people that are having to cower down here. We want to represent them fairly. But you’ve got to weigh that against your own personal safety.”

He continued:  “We have a security team here. We all talk about how much further we can go covering the story and when perhaps we should pull out.

“And if we did stay, what would be the attitude of the Russian troops – they’re going to win this, they have the force of power.”

He said: “Let’s not pretend the Ukrainian army is going to win this struggle. Because there are simply too many Russian troops. What is their attitude going to be for Western journalists? That is something you’ve got to weigh up as well.

“I arrived here on the eve of war last Tuesday. I actually thought I was going to be getting out three or four days later, because no-one actually believed that Vladimir Putin was going to launch this all-out invasion, and I’m still here.

“It’s a day to day thing deciding how long we’re going to stay and what it is you’re trying to achieve.”

Russian forces escalated their attacks on crowded urban areas on Tuesday, in what Ukraine’s leader called a blatant campaign of terror.

“Nobody will forgive. Nobody will forget,” Ukraine’s president Volodymyr Zelensky vowed after the bloodshed on the central square in Kharkiv, the country’s second-largest city, and the deadly bombing of a TV tower in the capital.

A 40-mile convoy of hundreds of Russian tanks and other vehicles advanced slowly on Kyiv, the capital city of nearly three million people.

The invading forces also pressed their assault on other towns and cities, including the strategic ports of Odesa and Mariupol in the south.

As the fighting in Ukraine raged, the death toll remained unclear.

One senior Western intelligence official estimated that more than 5,000 Russian soldiers had been captured or killed. Ukraine gave no overall estimate of troop losses.

The UN human rights office said it has recorded 136 civilian deaths. The real toll is believed to be far higher.