"Instead of exposing the powerful, newspapers are attending their parties and plotting their protection." 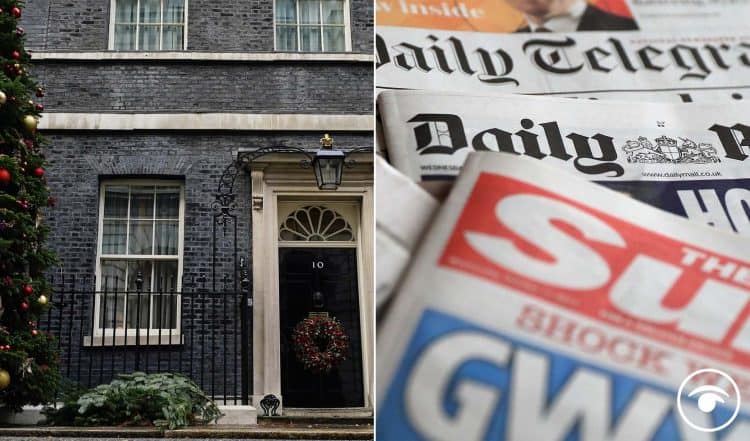 The Sun and the Daily Mail newspapers were outliers this morning as they came out in defence of our beleaguered prime minister.

It comes as there have been accusation that the government’s whip’s aretargeting wavering Conservative MPs with negative press coverage,

Boris Johnson has vowed to battle on after a senior Tory demanded “in the name of God, go” and a Conservative MP defected to Labour over allegations of rule-breaking parties in Downing Street.

Commeting on the Sun’s front page Owen Jones tweeted: “In an example of our completely normal media ecosystem, here’s The Sun – whose deputy editor is Boris Johnson’s former head of comms – coming to the government’s rescue, with a front page splash written by Carrie Johnson’s ex-boyfriend.”

The Express and the Mail urged readers to back the PM.

So the right-wing press seem to be falling into line behind the PM, and are Tory MPs also being forced to not break cover, stay quiet and definitely not defect to another political party.

A senior Conservative MP has urged Tory backbenchers facing “intimidation” over their support for a no confidence motion in Boris Johnson to report it to the police.

William Wragg, chairman of the Commons Public Administration and Constitutional Affairs Committee, said he has received reports of conduct amounting to “blackmail”.

He said they include “members of staff at 10 Downing Street, special advisers, government ministers and others encouraging the publication of stories in the press seeking to embarrass those they who suspect of lacking confidence in the Prime Minister”.

“The intimidation of a Member of Parliament is a serious matter. Reports of which I am aware would seem to constitute blackmail,” he said at the start of a committee hearing.

“Reports that the prospect of hostile press coverage is being used as a threat to silence MPs unhappy with the Prime Minister’s leadership are a new low in our politicians’ unhealthy relationship with the press.

“They show how some newspapers, the original proponents of so-called “cancel culture”, are being approached to work in partnership with political factions to damage their opponents. The national press’ refusal to join an independent regulator means there is no real redress for the victims of press cancel culture when reporting is untrue.

“No newspaper with a genuine belief in serving the public interest would allow itself to be used as a pawn in political power struggles.

“Instead of exposing the powerful, newspapers are attending their parties and plotting their protection.

“Leveson Part Two, the inquiry to investigate relationships between the press, the Government and the police, has never been more vital.”

Hugh Grant tweeted: “The new Deputy Editor of @TheSun had attended one of the Govt’s lockdown parties. Why didn’t the press expose them sooner? Add your name to calls for an investigation into the relationships between the press and politicians here.”

Related: Sun and the Mail come out batting for PM in our ‘completely normal media ecosystem’