"This is genius. And sweary. But I like that too," tweeted one amused viewer. 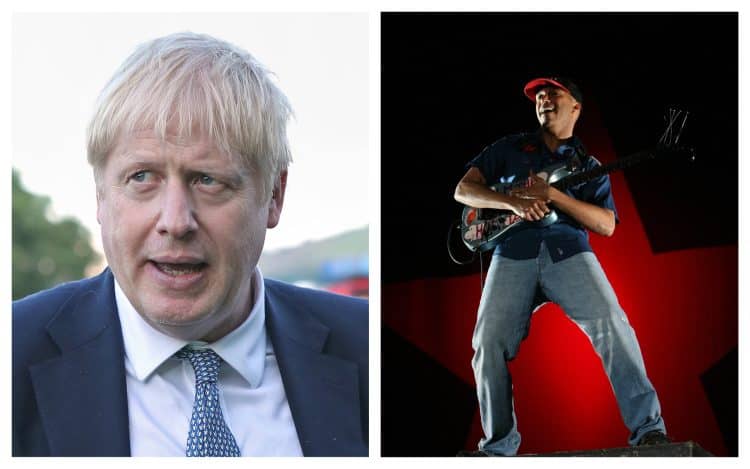 The prime minister has been lampooned by Cassette Boy in a viral video that has already been watched well over a million times since it was posted.

The social media sensation took a savage dig at the current crisis engulfing the Conservative Party with their remix version of Rage Against The Machine’s expletive-laden hit “Killing In The Name.”

Changing the title to “Rage Against the Party Machine,” the remix team crafted a minute and a half video of the prime minister’s words from different press conferences to give a sweary and damning overview of the the partygate scandal.

Here are some of the lyrics.

“As you comply, I socialise/ With cheese and wine, and forty guys/ From ‘Next slide please’ to wine and cheese/ The rules you see, don’t apply to me,” Johnson speaks in cadence to the rock classic. “And if I get caught, I won’t repent/ I’ll lie and say it was a work event.”

The band has a history with the PM.

Former Rage guitarist Tom Morello taped a “f*** Boris” message to his guitar as the band headlined Winchester’s Boomtown Fair, back in August 2019.

Morello has previously taken to the stage with a similar message for fellow Brexit advocate Nigel Farage.

The musician showed off a “f*** Farage” sign when he supported Muse at a show at the London Stadium in June and frequently criticised the former Ukip leader for using Rage’s Killing in the Name Of at party events.

It comes as a senior Conservative MP has urged Tory backbenchers facing “intimidation” over their support for a no confidence motion in Boris Johnson to report it to the police.

William Wragg, chairman of the Commons Public Administration and Constitutional Affairs Committee, said he has received reports of conduct amounting to “blackmail”.

He said they include “members of staff at 10 Downing Street, special advisers, government ministers and others encouraging the publication of stories in the press seeking to embarrass those they who suspect of lacking confidence in the Prime Minister”.

“The intimidation of a Member of Parliament is a serious matter. Reports of which I am aware would seem to constitute blackmail,” he said at the start of a committee hearing.

It went down well with a lot of folk…