War in Europe beckons, so obviously the British press is writing deranged fan fiction about an imaginary Corbyn premiership.

by Henry Goodwin
in Media, Politics 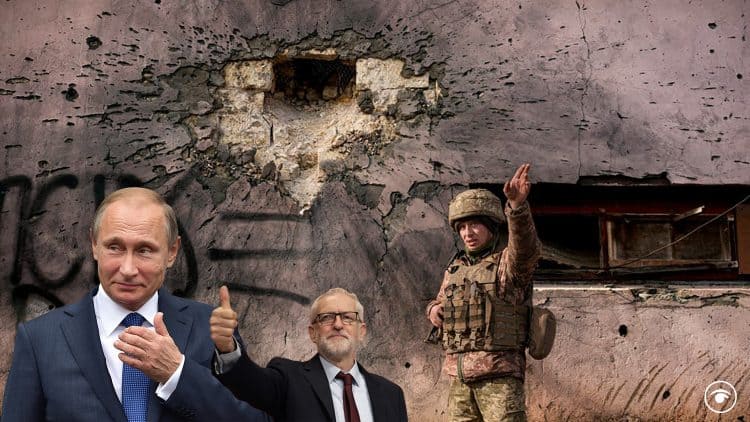 Russian tanks are rolling into Eastern Ukraine and Vladimir Putin is warning of war. As world leaders from Canada to Canberra yell “invasion!” and toss sanctions at the Kremlin, the British press have seemingly settled on a culprit: Jeremy Corbyn. The former Labour leader has, in recent days, been the subject of what can only be described as fan fiction, as commentators scramble to reassure themselves that no matter how bad things seem now, they would absolutely have been worse if Corbyn was in charge.

That may strike you as bizarre. Corbyn is, after all, not in charge. He is a backbench MP, far removed from any formal lever of power. What, you might ask, is achieved by suggesting that the catastrophe unfolding in Ukraine is actually fine considering what could be happening if a bloke who lost an election a couple of years was representing the UK on the world stage?

It’s a good question – and one more worthy of a thesis than a piece of clickbait such as this. So instead of litigating the ‘why’, let’s look at the ‘what’ – as in ‘what the hell are they talking about?’ Let’s begin with the Jewish Chronicle, whose long-time editor Stephen Pollard published on Tuesday a bizarre piece of alternative history, entitled: ‘PM Corbyn invites Russian troops to Britain’.

The scene is a fictional meeting between Prime Minister Corbyn and Vladimir Putin, in Moscow. And it plays the hits: “After their 6 minute meeting, Mr Corbyn told reporters that it was “imperative that Israeli aggression – sorry, I mean Nato aggression – is resisted” and said he was committing 10,000 British troops to fighting alongside Russian forces in “defending the motherland.”

It continues: “Mr Corbyn told the Duma that “rootless cosmopolitans” were attempting to undermine his own leadership and that he stood squarely behind president Putin “in his overdue attempt to reshape the capitalist oligarchy that has ruled Europe for too long. Those of us who value peace above all must stand together in support of Russian forces’ friendship manoeuvres”.

“He also invited Russian forces to visit the UK whenever they wished, suggesting that they could travel en masse across Germany, France and the rest of mainland Europe on their way.”

It goes on to imagine a situation in which Britain hands control of its nuclear deterrent “to those who would make good use of them, such as the Russian president” – and signs off with a dash of Communist erotica: “This report has been approved by the Central Commission for Ethical Journalism, the new government body which approves all media reports.” Nice.

Not to be outdone, The Telegraph chased a similar line on Monday, suggesting that the Ukraine crisis provides “an opportunity to consider, once again, the political instincts and loyalties” of Corbyn. Tracing the ex-Labour leader’s fall from the dizzy heights of 2017 to the Salisbury poisoning, the paper paints Corbyn as a “naive (or duplicitous) Kremlin patsy”.

The writer goes on: “But for all Corbyn’s faults, he is consistent. On several occasions now, he has publicly appeared to sympathise with the interpretations of Putin’s Russia. Everything is Nato’s fault, he and his fellow-travellers on the hard-Left endlessly seem to think. How can poor Russia be blamed for annexing part of Ukraine in 2014 and for its attacks this week when the big, bad military alliance is expanding ever eastwards?”

More fan-fiction follows, imagining what Corbyn might be saying as this crisis unfolds: ““Both sides are at fault,” he might intone… “I oppose all forms of war,” he might have told MPs. But some more than others, he would have been careful not to add.”

Overlooked in both of these comic book capers is the reality of Labour’s Russia policy under Corbyn, which arguably went further than those sanctions announced by Boris Johnson on Tuesday. They included an “Oligarch Levy” to tax the secret offshore purchases of UK residential property and a “Magnitsky Clause” to sanction human rights abusers, among other things. Conveniently overlooked too is the fact that our current prime minister, while he was serving as the actual foreign secretary, got so steaming drunk at the birthday party for a Russian oligarch who he later ennobled that the lost his security detail at an airport.

Still, let’s not let reality get in the way of a good yarn.