More than two-thirds of Brits surveyed by the ONS said they still plan to wear masks on public transport. 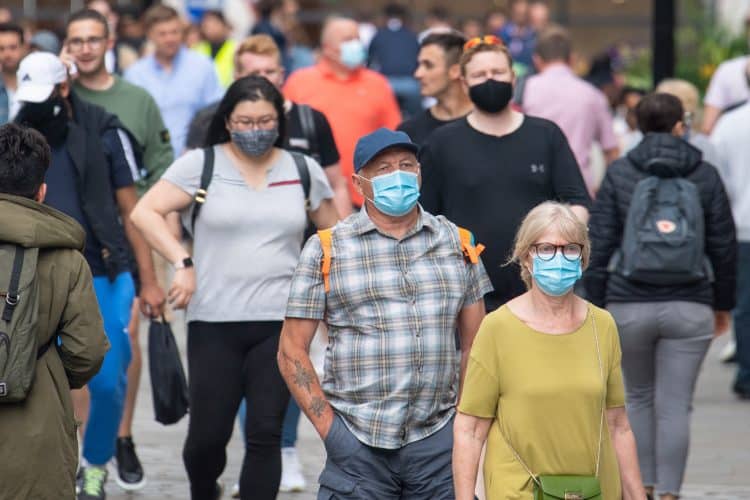 People wearing face masks among crowds of pedestrians in Covent Garden, London. Rumours were abound in the Sunday newspapers that Prime Minister Boris Johnson, who is due to update the nation this week on plans for unlocking, is due to scrap social distancing and mask-wearing requirements on so-called "Freedom Day". Picture date: Sunday July 4, 2021.

Two-thirds of adults in Great Britain said they still plan to cover their faces in shops, following the lifting of most coronavirus legal restrictions in England from July 19, according to new data.

The same percentage – 64 per cent – plan to wear masks on public transport, while 60 per cent plan to avoid crowded places, the Office for National Statistics (ONS) said.

Statistics from the ONS’s weekly Opinions and Lifestyle Survey also found nine-in-ten adults believe continuing to wear face coverings is important for slowing the spread of Covid-19, whilst 88 per cent said social distancing from those not in their household remained key.

More than half who were surveyed between 7-11 July said they were worried about plans to remove legal restrictions, which come into force today. One fifth said they were “very worried”.

How far off is ‘normal life’?

There was also a slight uptick in the number of people who believe normal life is a year or more away – at 28 per cent. This compared with 25 per cent who said the same in the survey a week earlier, although it was down from a peak of 41 per cent last September.

Breaking down the data by age groups, respondents between 16 and 29 years old were the least likely to continue with face coverings – although more than half said they still would.

The percentage of people likely to wear masks in shops increases with age, with 74 per cent of those aged 70 and over planning to do so.

On public transport, 69 per cent of those aged 70 and over said they plan to wear face coverings, compared with 70 per cent aged 50 to 69.

Almost half of adults plan to maintain social distancing around others they do not live with. Younger generations are less likely to socially distance, with just 31 per cent planning to, whilst those aged 50 to 69 are most likely, with 59 per cent.

Related: Crowds flock back to clubs and ring in Freedom Day in style