Some nightclubs welcomed back revellers last night for the first time since March 2020. 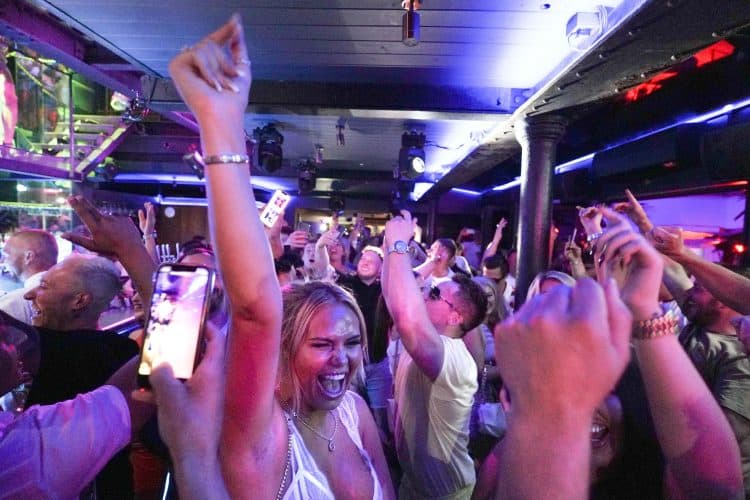 Excited revellers described the midnight reopening of nightclubs as “like New Year” as they queued up for their first night out dancing since the start of the pandemic.

Some said they had “missed the buzz” of being out while others admitted they were already bored of queueing and needed the toilet.

Most of the remaining coronavirus restrictions were lifted in England on Monday, allowing nightclubs to finally welcome back patrons for the first time since March 2020.

Outside Egg nightclub in north London clubbers queued for more than an hour and cheered as the clock struck midnight, following a countdown from ten.

Fundraiser Chloe Waite, 37, who was first in the queue, said the occasion was “something we’re going to remember for a long time.”

“It’s going to be a special night,” she said. “For me this is a New Year’s-type event and something we’re going to remember for a long, long time and we might not get the opportunity for a while.”

Gabriel Wildsmith, 26, a video producer from London, who joined Waite at the front of the line said he had missed “meeting random people” and making friends.

“I’m so excited I’ve been waiting for this for so long … basically since we locked down,” he said. “I love going to clubs and I love meeting random people. You make great friends and you couldn’t do that until tonight.”

The excitement was just as palpable in Leeds, where patrons queued to enter Bar Fibre.

“It feels so special,” said bar owner Terry George. “People are treating it like a very special occasion, like a New Year’s Eve type affair. Freedom Eve is what we’re calling it.

“It should’ve been something that was there much earlier than this.”

George, who had to close one of his three bars in Leeds due to financial pressures from the pandemic, said it would still take “a long time” to catch up on lost revenues, but “to have the place rocking again is going to be so exciting”.

“What’s it’s been like for the last year and a half is stopping people dancing, coming up to people who are sat at a table saying ‘You can’t dance, you can’t sing, you’ve got to keep quiet’. It’s the opposite of what we’re meant to be doing in the entertainment world.”

Bar Fibre patron Lorna Feeney, 44, of Leeds, said: “I’m absolutely ecstatic. That’s my life, my soul – I love dancing. It bonds me, it’s amazing, it makes me feel so good.

“It’s about listening to the music and really feeling it, having a dance and not having to worry about anything that’s going on – not sitting on your chair and getting fat.”

But for some, old exasperations returned swiftly with full bladders and sore feet, as guests speculated what the atmosphere inside would be like.

One woman waiting to enter Egg, who gave her name as Dolores Frankenstein, said: “I’m a bit open-minded as to how it’s going to be.

“I don’t know if it’s going to be good, it might not be. It might be quiet, it might be busy, (but) I think it’ll be a bit overwhelming to be around so many people again.”

She added: “I’m a bit bored of queuing already.”

Liam Turner, 24, a warehouse worker from Banbury, said: “I need a wee but we’re in the queue, I’ve missed the feeling,”

“We’re so keen, it’s been so many months, too many months so I’m just glad to be back. I’ve missed the buzz of being in the queue going into a club.”

Little over an hour after the first guests entered, others were offered water and told by security members to sober up opposite the venue.

There were mixed feelings with regard to safety, with some admitting feelings of “apprehension” and others saying there was “zero” to worry about.

Actor Alex Clarke, 40, said: “There’s a bit of apprehension and uncertainty about the protocols. But as long as everyone is sensible then it’ll be alright.”

Kevin Ally, 45, who works in professional services, said: “I think we’re over-analysing it, it’s going to be awesome.

“There’s zero concern. The only concern is why we haven’t been here for a year and a half. It’s been a very long time since we’ve been out. It’s good to be back, and we’re here to dance.”