Heathrow Immigration Removal Centre was recently criticised for failings around the death of other detainees. 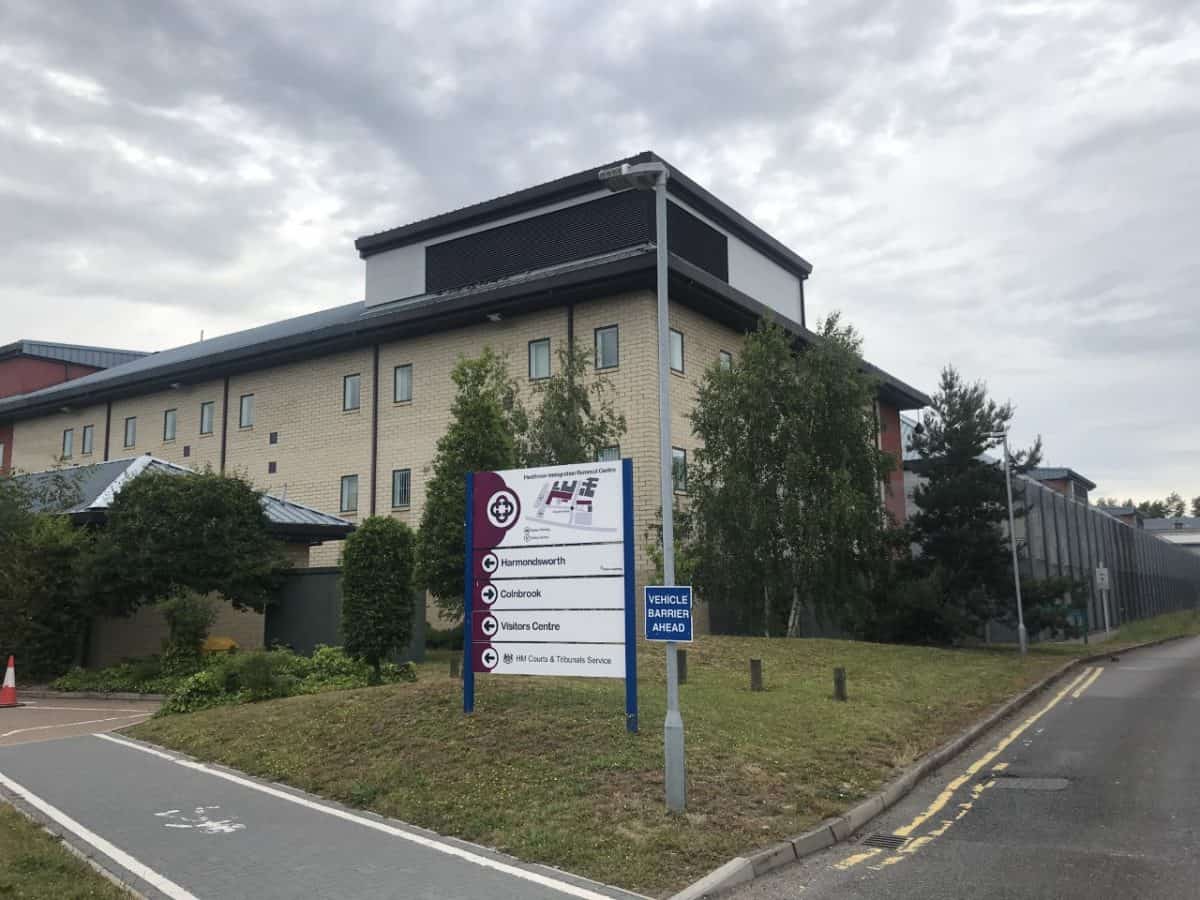 A man has died at a Home Office detention complex recently criticised for the deaths of other detainees.

Detainees we spoke to say the man was screaming for a nurse all Wednesday night and was only discovered lifeless in his cell yesterday morning.

They said other detainees on G block at Harmondsworth detention centre, part of the Heathrow Immigration Removal Centre (IRC) complex, had called for a guard to come all night but that he had received no attention until the morning when he was found dead.

The incident is being investigated by the police and by the prisons ombudsman.

“He was shouting nurse, nurse, help, help. Everybody was shouting to the guards to come and help,” said one fellow detainee who asked to remain anonymous. He said that he and other people on the wing had been left traumatized by what had happened.

Inmates said that there is an intercom in each room and people had been calling for a guard to give the man, who has been named by the Home Office as Mr Okwurime, some medical attention.

It is unclear why their calls would be ignored.

The detainee who died was known as Oscar by his fellow detainees and is believed to be in his thirties and to have come to the UK from Nigeria. Other inmates report that his cellmate was released earlier in the day.

Detainees were distressed, weeping and held a protest after the death. Some refused to go back to the rooms in which they are locked overnight.

Previously, ambulances have been reported to have been turned back after detainees have resorted to calling ‘999’ for medical help at detention centres.

“Nobody should die in this place”

“It is not the first time someone died in this place,” a Harmondsworth detainee said. “Detention is killing people here. People are crying, people are trying to commit suicide, all the time I witness people cutting themselves in here. No one should be in a place like this. It’s not right.”

“They were trying to rescuscitate him in the morning but he never come to,” said another detainee who has been held for 11 months. “I saw the nurse crying.

“We had a church service for him and a lot of people were crying. We don’t know how to process it. We are not supposed to be here for as long as we are and nobody should die in this place. It’s not like a crime has been committed.

“Nobody was offered a psychiatrist or mental health team, even though many asked to as they were traumatized by what they had seen.

“A lot of us protested last night by refusing to go to our rooms, but we were threatened with violence, being restrained and taken by force.”

Detainees described people with clear mental health problems being detained at the removal centre, detainees in states of high distress and illegal drugs being taken.

Karen Doyle of Movement for Justice that had been contacted by concerned detainees from Harmondsworth said: “This government has blood on its hands for every day they continue to maintain their brutal detention system.

“As long as detention continues there will be needless deaths – it is corporate murder, easily covered up when witnesses are summarily deported. Detaining people for administrative purposes in detention centres must come to an end, Harmondsworth and every other detention centre must be shut down. That is the only way to prevent deaths in detention, to prevent the brutality and torture that people are subject to.”

All the major opposition parties have taken on board the findings of the Home Office’s own Shaw report which recommended a limit to the amount of time people are detained for, as well as more stringent measures to ensure that vulnerable people who may be suffering from mental health issues, or have been tortured or trafficked are not detained. MPs for all parties are calling for a humane limit of 28 days.

However we spoke to detainees who said they were vulnerable and had been assessed by medics to be suffering from mental health conditions. One said he had been moved between different detention centres and spent a total of nine months in detention so far.  We were told of others in Harmondsworth who have been held for around a year, and someone who was released back into the community after 18 months in detention.

Immigration removal centres such as Harmondsworth are designed for people with a prospect of removal soon.

The Labour Momentum movement is set to propose an end to immigration detention at the Labour Party conference in Brighton later this month. The proposal says: “By criminalising migrants, the Conservatives are stoking anti-immigration sentiment to set a far-right policy agenda.”

The motion calls for Labour to adopt a “community-based” approach to immigration without the need to detain people.

Most European countries have much stricter rules about how long people can be detained for on such administrative grounds.

Harmondsworth is part of Heathrow Immigration Removal Centre which is run the the ‘Care and Custody’ division of outsourcing giant Mitie.

A Mitie spokesperson refused to comment on individual detainees “while there is an ongoing investigation by the Prisons and Probation Ombudsman.”

Serious failings in the death of Marcin Gwozdzinski

Mitie were criticized in June in the inquest of a Polish detainee at Heathrow, one of 11 people to die in immigration detention in 2017, half of whom were European.

The inquest into the death of Marcin Gwozdzinski found serious failings which contributed to his death, including missing “significant warning signs” and inadequate risk assessments by untrained staff.

Mr Gwozdzinski died on 6 September 2017, three days after he was found hanging in his room at Heathrow IRC, run by Mitie. The 28-year-old had been detained for nine months, and the jury also noted that this “prolonged period of detention” was a possible cause of death.

He had lived in the UK five years, working in South West London before his prolonged detention. Before he died Mr Gwozdzinski had become very distressed and warned a detention officer working for private security company Mitie that he could not take detention anymore and wanted to die.

After the inquest his family issued the following statement: “We are disappointed that many mental health referrals were made but Marcin did not see anyone and we are disappointed that the resuscitation was messed up. There were people without training deciding whether Marcin posed a risk to himself.  He was in a cell on his own and no one thought that was a risk.

“Not only was he stuck in the detention centre but staff did not use an interpreter to communicate with him, I don’t believe he would be able to understand or make himself understood. When Marcin died he had no idea when he was getting out and nor did we, it’s worse than prison. At least in prison you know there is an end. I am angry that they did not help him.”

Clair Hilder of Deighton Pierce Glynn, the family’s solicitor added: “They call them Immigration Removal Centres but Harmondsworth was designed as a Category B prison and detainees on Marcin’s wing were locked up for 13 hours a day. The inquest revealed serious gaps in staff training, inadequate risk assessments and a lack of care

“It is important lessons are learnt however we have little confidence Mitie Care and Custody will make the necessary improvements in light of their failure to follow up on the recommendations they made in their own investigation of the incident completed in November 2017. It is important that the Home Office steps in to ensure detainees are safe.”

“Crying out for help”

Natasha Thompson, of INQUEST said: “Marcin was desperately crying out for help in the last few days of his life. His pleas, as well as those of other detainees who recognised his distress, were ignored, leading to his tragic and preventable death.”

In May this year an inquest into the death of Amir Siman-Tov found several missed opportunities to prevent the hoarding of prescribed medication that he took after insisting he was terrified of being returned to Morocco, “despite Mr Siman-Tov repeatedly stating his intention to do so”, and that this contributed to his death.

The 41-year-old was being held in Colnbrook IRC – the other half of Heathrow IRC when he died in the early hours of 17 February 2016.

In March an inquest into the killing of Tarek Chowdhury, 64, who was killed by another detainee who was experiencing serious mental ill health in Colnbrook IRC found that the man who killed Tarek in December 2017 had been inappropriately placed in immigration detention, alongside numerous other critical failings.

The Government has refused repeated calls from parliamentarians, faith groups and human rights organisations to stop detaining people indefinitely for immigration administrative grounds. They say the time limit recommended by the Home Office’s Shaw report would “severely constrain” immigration control, despite calls from MPs from every party for more efficiency and a 28-day-limit to curtail the human cost of such policy.

“Any death in detention is a tragic event and our thoughts and condolences are with the family and friends of Mr Okwurime.

“The welfare of all those in our care is of the utmost importance. All deaths in immigration detention are subject to investigation by the police, the coroner and the independent Prisons and Probation Ombudsman.”