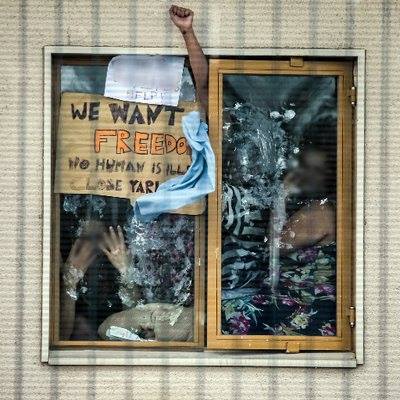 Last week we reported that over 100 women detained by the Home Office with no time limit on administrative grounds has gone on hunger strike over “inhumane” conditions at the facility on Wednesday.

The hunger strikers were urging the Home Office to end “offensive” practices which they said leave people “breaking down psychologically.”

Most of the women broke their fast on the weekend. But according to reports we have been receiving from inside the Serco-run detention centre, some did not and others started refusing food on Monday again.

“It’s going to be an indefinite hunger strike until we get what we want, until they hear our voices” one of the women confirmed.

“In here, we are separated from everything that makes you a human being. Even animals have better rights than what we do.”

One striker collapsed early on Thursday, and had to be taken to the medical area in a wheelchair, according to detainees.

Also on Thursday, one of the hunger strikers was taken into a meeting room by a Serco officer who told her it was to talk about why she was striking, but then her belongings were gathered and she has been deported, according to SOAS Detainee Support (SDS)– an organization who have been in contact with the hunger strikers. She has been sent back to India where she has been disowned by her family and faces serious abuse on her return, according to SDS.

An emergency demonstration was held at the Home Office in London this week, with protestors calling on the Home Secretary to listen to the women’s demands.

There is also a petition in support of the demands of the hunger strikers, which has now gained nearly 4,000 signatures.

SDS also claim that faxes that women have written communicating with the outside world have been confiscated, including a written statement from one of the women. SDS has received faxes with the content removed, and on Tuesday one that did come through said only “We are not animals”.

The hunger strikers have a list of demands about their treatment, their ability to defend themselves legally from inside the detention centre, and are calling for a time limit to their detention. At present people can be held by the Home Office with no need of a judge indefinitely.

Some people have been held by the Home Office like this for years.

One woman who wished to remain anonymous told The London Economic: “there are ladies here with crutches, disabled people, sick people, women over 60, here for months.

“So many of us have been tortured, we’ve been raped, violated. We’ve given them our stories of being assaulted but we are being detained indefinitely.

“Psychologically it kills us. You don’t know what tomorrow holds – if you’re going to be released tomorrow, or taken on a plane.

“We’re living in limbo, it’s no better than how they hold people in Guantanamo Bay.

“Before you know it you’ve been in five months.”

The woman who wished to remain anonymous as she fears for her life if she is returned to the country she originated from told The London Economic that she was persecuted there for being LGBT.

She said she is being held in Yarl’s Wood despite having a Judicial Review pending in the courts. People should not be detained if they have a court case pending as according the Home Office’s own rules, only people with a prospect of being removed from the country should be detained like that.

Successive surveys have shown that most of the detainees in Yarl’s Wood are not deported, but instead are eventually released again.

Yarl’s Wood is operated by Serco and holds on average 350 detainees over the age of 18. Most are single women, but husbands and wives can live together in the Hummingbird family unit, and there is also a separate short term holding facility for single men.

A Channel 4 News undercover documentary found evidence of the poor treatment of detainees. And 10 staff members were sacked amid accusations of sexual misconduct with female detainees. No charges have been pressed, and Labour MP Yvette Cooper has called for an investigation.

This is not the first hunger strike at the Immigration Removal Centre. In 2015 Women went on hunger strike to demand the release the wife of a man who had died there of a heart attack.

The couple insisted that they were detained entering the country on holiday when Border Forces did not believe them despite their arrival with return tickets and a visitors’ visa. A Prison Inspectorate report into the death criticized a lack of interpreters as well as delays in booking a doctor’s appointment and an ambulance arriving.

Soon after the death a visit by Her Majesty’s Prison Inspectorate found serious concerns including male staff entering women’s rooms without knocking, most detainees feeling depressed, some even suicidal, the use of violence and force, pregnant and vulnerable women detained without clear reason.

Faith leaders from all UK’s major religions have called on the Government to end its “unjust, ineffective and inhumane” practice of detaining people indefinitely without trial for administrative reasons in immigration cases.

At present, Britain detains around 30,000 people a year in mostly privately-run detention centres on administrative grounds, ostensibly while attempts are made to remove them from the UK. Britain is the only European country not to have a time limit on how long people can be detained for on immigration grounds.

“Detention and removal are essential parts of effective immigration controls, especially in support for the removal of those with no lawful basis to stay in the UK.

“We take the welfare of our detainees very seriously and any detainees who choose to refuse food and fluid are closely monitored by on site healthcare professionals.”

“Detention and removal are essential parts of effective immigration controls, especially in support for the removal of those with no lawful basis to stay in the UK.
“We do not detain individuals indefinitely – when people are detained, it is for the minimum time possible and detention is reviewed on a regular basis.”
“We take the welfare of our detainees very seriously and any detainees who choose to refuse food and fluid are closely monitored by on site healthcare professionals.”

We want an end to indefinite detention and a return to the original plan of the 28 day limit.

We want the Home Office to respect Article 8.

We want the Home office to respect the European Convention of Human Rights regarding refugees and asylum seekers.

We want the Home Office to respect due process and stop deporting people before their cases are decided or appeals are heard.

We want due processes before we are imprisoned on immigration matters.

We want a fair bail process and the Home Office to end the process of selective evidence disclosure to the immigration tribunal courts and instead disclosure of all evidence to ensure a fair judgement is reached.

We want adequate healthcare and especially the mental health nurse to stop operating as an extension of the Home Office asking people such questions as, “did you know you were going to stay in the UK when you entered?”

We want the Home Office to stop detaining the vulnerable people, that is victims of rape, that is torture, all forms of torture, trafficking, forced labour, the disabled, the mentally ill and so on.

We want amnesty for all people who have lived in the UK for more than 10 years and an end to the exiling of those who came as children and are culturally British.

We want an end to the Home Office’s of employing detainees to do menial work for £1 per hour, it prays on the vulnerable and forces them to participate in their own detention.

We want an end to charter flights and the snatching of people from their beds in the night and herding them like animals.

I want to stress that there are as many demands as there are detainees, everyone in detention is unfairly treated, and all we want is a fair process.

This is the only option we are left with to express how we feel. We will not eat till we are free.