Margaret Thatcher's statue was pelted with eggs yesterday and not everyone is very happy about it, especially this Mail columnist. 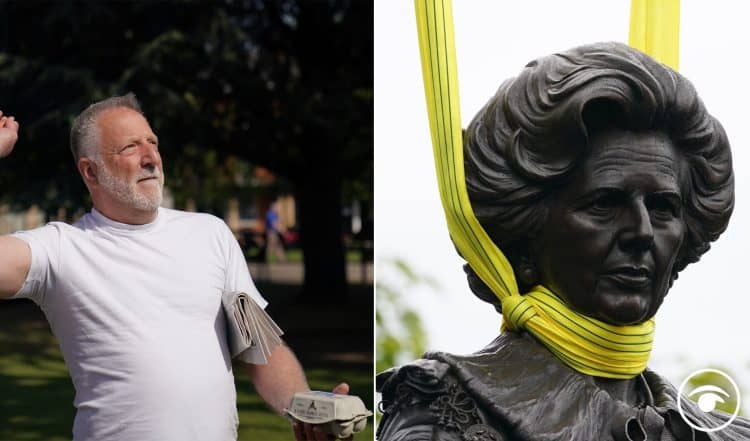 How long did you think it would take for someone to throw stuff at the new Margaret Thatcher statue in Grantham?

Well, the £300,000 (yes you read that right) homage to the former PM was pelted with eggs within hours of being mounted on a ten-foot-high plinth, designed to stop this sort of thing from happening.

In February 2019, a planning committee unanimously voted in favour of the statue – which was originally intended for Parliament Square in Westminster.

Despite its unveiling being delayed due to the Covid-19 pandemic, the statue was erected on a 10ft-high granite plinth on Sunday morning.

One person who was livid about this egg frenzy was Mail columnist Andrew Pierce.

He said the person who threw the eggs should grow up as he tweeted: “A director of a university arts centre aged 59 throws first egg at #MargaretThatcher statue. God help his students. Isn’t he a bit old to behave like a child.”

That may be true, but many people were quick to point out that he has a shrine to Thatcher in his own home.

Possibly he should move on and mature a bit too?

What is worse a shrine to Thatcher or pelting eggs at her statue, the internet will decide:

He has had it for a while, as the Mirror’s Kevin Maguire tweeted this back in 2017:

Does this response speak for you?

And to finish, he tweeted about Australia’s inclusion in the Eurovision song contest:

And if you’re a remainer this response will probably resonate with you: