Darren Pencille launched an ‘unrelenting’ attack on Lee Pomeroy on the Surrey train. 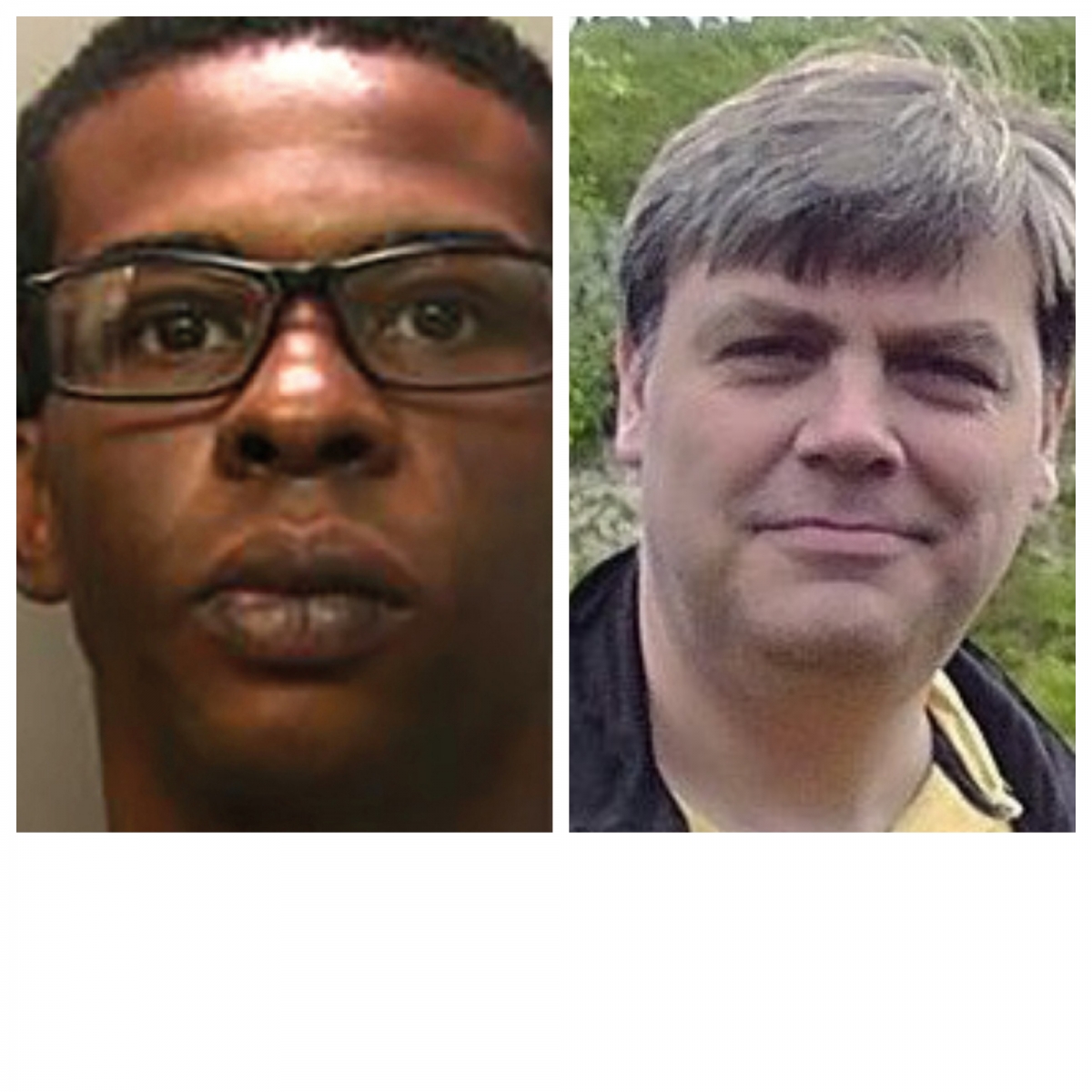 A knife obsessed man has been jailed for at least 28 years for the “senseless” murder of a train passenger.

Other travellers on the Guildford to London service in January were horrified when Pencille produced a knife and stabbed the unarmed IT consultant 18 times.

After the attack, which was caught on CCTV, Mr Pomeroy’s son cradled his father’s head in his arms as he lay dying.

The defendant, who declined to give evidence at his Old Bailey trial, had admitted having a knife but denied murder, claiming he had acted in self defence against the 6ft 3in tall victim.

But jurors heard how 5ft 10in Pencille had a history of violence, having previously stabbed a flatmate in the neck over a minor disagreement in 2010 and had threatened to kill a staff member at a mental health hostel in June last year.

A jury deliberated for nearly 20 hours to find Pencille, of no fixed abode, guilty of murder.

Mrs Justice Cheema-Grubb sentenced him to life with a minimum of 28 years.

She said Pencille had a “hair trigger” temper and had killed Mr Pomeroy after starting an “unnecessary row”.

She said: “Anyone who watched the breathtakingly shocking CCTV footage would struggle to understand how you thought you could claim you acted in self defence against that unarmed man who was coming up to London for a pre-birthday treat. A day out with his teenage son.

“The anguish of losing a father in such circumstances will stay with him.”

Pencille’s girlfriend, Chelsea Mitchell, 28, Farnham, Surrey, was found guilty by a majority of 11 to one of helping him evade police after the attack.

Mrs Justice Cheema-Grubb said Mitchell acted out of “misguided loyalty” and jailed her for 28 months.

Earlier, Mr Pomeroy’s widow Svetlana wept in court as the verdicts were given.

In a victim impact statement she described the “senseless loss of life”, made worse because of their son’s presence.

She said her husband was a vibrant, highly intelligent perfectionist, a loving father and her “guiding light”.

She said: “It was a senseless loss of life.

“I miss my husband every day and to compound the situation (his son) was with his father when he died.

“I have lost my friend, my soul mate and my guide. Lee loved life and it’s been cruelly cut short.

“On Friday January 4 my life and that of my son changed forever. My husband of 18 years died in a sudden, violent and distressing way.

“Lee Pomeroy should have been celebrating his 52nd birthday the day after he died. We had cards and presents for him which he never got to see.

“Our future lives have been devastated by what happened. Lee was the main breadwinner.”

He said: “He’s a dangerous man. Quite clearly with his previous convictions, where he also stabbed another man in the neck, and his propensity for carrying knives, he showed his dangerous, aggressive nature and that he wasn’t afraid to use that knife on that train on January 4.

Mr Pomeroy had boarded the train at London Road, Guildford, for a day out in London with his teenage son, ahead of his 52nd birthday the next day.

Father and son had got into the same carriage as cannabis user Pencille and made their way down the aisle, the court heard.

Jurors heard they may have been “blocking” Pencille’s way, prompting the snide response: “Ignorance is bliss.”

A heated argument erupted, with Pencille swearing at Mr Pomeroy and calling him a “pussy”.

Pencille shouted: “You touch me, you touch me and you see what happens at the next stop.”

Mr Pomeroy was said to have demanded an apology, saying: “You should not have humiliated me in front of my kid.”

At one point, Pencille was heard to say on his mobile phone: “I’m going to kill this man”, the court heard.

As Mr Pomeroy remonstrated, Pencille swung the knife and plunged it into his neck, cutting through the jugular vein.

Prosecutor Jake Hallam QC had told jurors: “Eyewitnesses saw what they thought was the two men trading punches. They were half right.

“They saw Lee Pomeroy punching the first defendant, defending himself, having been stabbed in the neck by him.

Pencille got off at the next station, leaving Mr Pomeroy mortally injured with 18 knife wounds to his neck, torso, thigh and arm.

Mitchell picked up the defendant and bought hair clippers and razors for him to change his appearance, jurors heard.

Jurors were told paranoid schizophrenic Pencille had been seen by psychiatrists since 2004 but had not taken any anti-psychotic medication at the time of the attack.

His mother Ingrid Robertson told jurors: “He always thought people were looking at him or wanted to do something to him.”

Following the earlier incidents of violence, the defendant had pleaded guilty in February 2010 to causing grievous bodily harm and common assault in June 2018.

Last month, while Pencille was in jail awaiting his trial, Mitchell sent him a Father’s Day card in the name of their stillborn son Romeo, in breach of her bail conditions. In the note, she told him: “I miss you so much, everything is falling apart. Loosing everyone I love and all I want us my family back (sic).”

The court heard Pencille had a string of previous convictions for violence and dishonesty dating back in to 1999, including possession of knives, burglary, and having a prohibited firearm.

Mitchell also had convictions for 10 offences dating back to 2011, including for using threatening words or behaviour and assaulting a police constable.

Jason Corden-Bowen, from the CPS, said: “Although he claimed innocence, Pencille did not give evidence in court. His claims to be acting in self defence were proved to be false with evidence built up by the CPS and police from witnesses, phone recordings and CCTV footage.

“This was a brutal and senseless killing of an innocent father who has been taken away from his family. Our thoughts are with the Pomeroy family.”

Mrs Pomeroy was supported in court by her husband’s sisters, Karen Blackaby and Kim Pomeroy, who stood by her side as DCI Blackburn spoke on their behalf after the sentencing.

He said: “This was a case where a brief argument resulted in a moment of shocking violence that ended with the death of an adored father, husband, son and brother.

“No argument, however heated, should result in the violence seen that day and no family members should ever bear witness to the violent death of a loved one.

“It was solely the actions of a murderer who, when challenged, could only respond with vicious threats, arming himself with a knife which led to Mr Pomeroy’s death.

“The loss of Lee has left an unfillable hole in the lives of his family. He was their rock, their main breadwinner, a sole mate to his wife and a defender, guide and mentor to his teenage son.

“I hope the convictions of Darren Pencille and Chelsea Mitchell provide some small comfort and helps them to slowly be able to piece their lives back together after this sudden loss.”