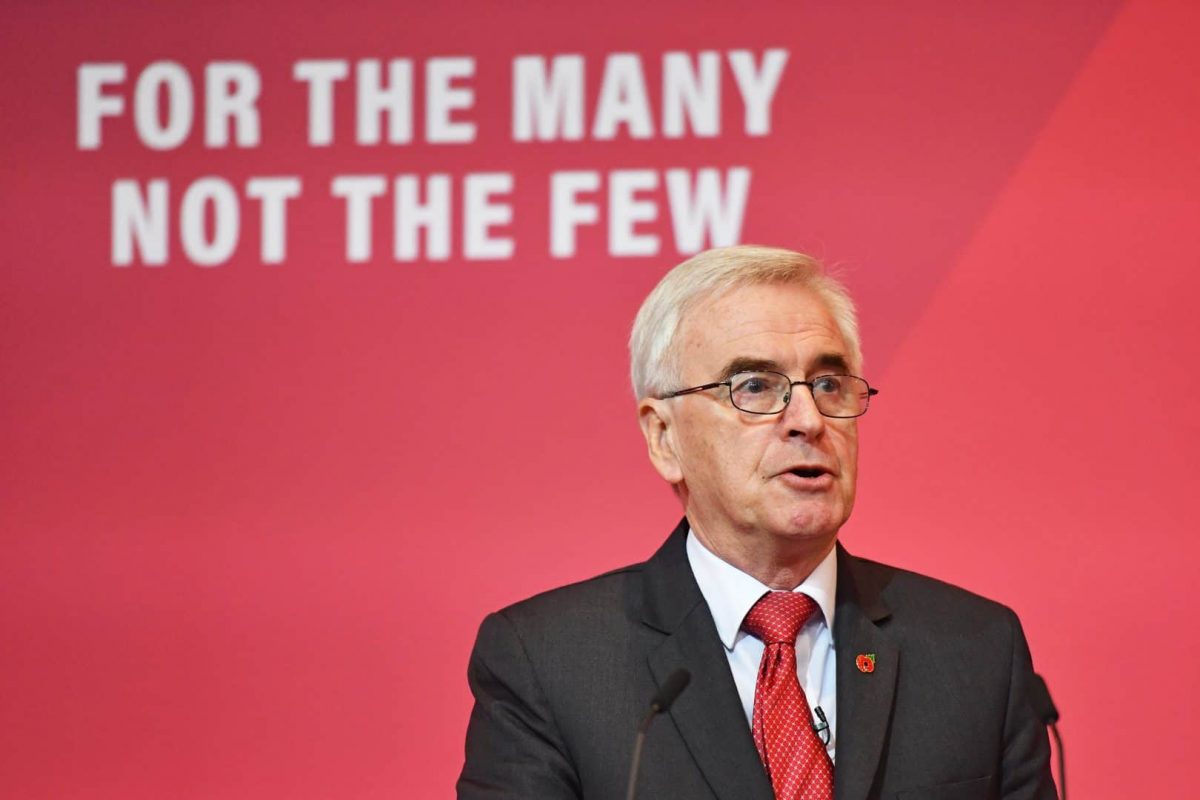 Health funding will be boosted by £26 billion under a Labour government which will cover the cost by taxing the very richest in society, the party has pledged.

In a speech at the Royal Society of Medicine, they are expected to announce an annual average 4.3% funding increase for health spending over the next four years, funded from Labour’s proposals to reverse corporation tax cuts and tax the wealthiest people in society.

There will be a focused drive on prevention measures to stop people getting sick, as part of Labour’s mission to tackle health inequalities and prioritise children’s health and well-being.

Mr McDonnell is expected to say: “The world-class health service we all need and depend on needs proper funding.

“Labour’s policies to tax the richest in society and invest for the future through our Social Transformation Fund mean we will be able to improve millions of lives.

“And ending privatisation means that money can be spent on healthcare rather than dividends for Boris Johnson’s friends in the private healthcare industry.”

Mr Ashworth is expected to say: “With experts warning this winter is set to be one of the worst, the truth is our NHS is crying out for a financial rescue plan to deliver real change for patients.

“We are announcing today the levels of investment our NHS needs to not only again provide the quality care our sick and elderly deserve but secures the NHS for the future as well.

“We’ll invest more to prevent people becoming ill in the first place and we’ll give mental health and well-being a greater priority than ever before.

“This General Election is about millions on waiting lists and hundreds of thousands who’ve waited on trolleys under the Tories – only Labour has a plan to rescue our NHS.”

Ms Berger said: “Labour’s health announcement today completely misses the point. They are ignoring the fact that Brexit is the biggest threat to the NHS – if Labour allow Brexit to happen, they cannot rescue our NHS.

“Brexit has already cost the economy as much as £66 billion. If Corbyn had not tacitly supported Brexit, Labour could have funded their NHS plan more than two times over.

“Only the Liberal Democrats can offer voters a brighter future through stopping Brexit and transforming our NHS and social care services for the future.”

However Nuffield Trust chief executive Nigel Edwards said this funding would mean the NHS could “breathe a sigh of relief”, adding: “A 4% increase a year will make a big difference compared to the 1.4% average the NHS has grown used to in recent years.

“It is enough to get most waiting times back on track over time, but tough decisions will still have to be made.

“Although ‘ending privatisation’ will appeal to many, stopping the NHS from funding private procedures will not actually save much money as private companies and NHS trusts get paid the same price per operation.”

Mr Edwards said money is not the be-all and end-all, pointing out that extreme staff shortages are the greatest problem facing the NHS.

Richard Murray, chief executive of The King’s Fund, said: “The success of any NHS funding policy will rest on the ability to recruit and retain enough workers to staff NHS services.

“Labour’s pledge to reinstate a training bursary for nurses is welcome, although it will be critical to focus on retaining existing NHS staff over the next few years, at a time when many are leaving the service due to the intensity of their workload.”

Mr Murray said that for many UK voters, the distinction between the NHS and social care is unclear, and many are surprised to find that social care is not free at the point of use.

“The current social care system is not fit for purpose and is failing the people who rely on it. A key test for party manifestos will be whether they include plans for fundamental reform of social care funding,” he said.

Unison general secretary Dave Prentis said: “This rescue plan can’t come soon enough and will give hope to health service employees and patients across the UK. It takes the NHS back to the time before heartless Tory cuts.”

Dame Donna Kinnair, chief executive and general secretary of the Royal College of Nursing, said all parties need to commit to investing in nursing, adding: “No matter how people voted in the EU referendum, nobody wants the NHS left open to a carve-up as a result of a post-Brexit trade deal.

“Brexit chaos and rows about deals cannot become a distraction from solving the mounting nurse shortage at home.”

Niall Dickson, chief executive of the NHS Confederation, which represents organisations across the healthcare system, said further detail is needed from parties about their plans to tackle the crisis in social care, an issue he said politicians of all parties have “ducked for too long”.

READ MORE: Corbyn accuses Tories of Brexit ‘hijack’ to sell out the NHS