"How are they expected to find the money to pay such fines. It’s always quite ludicrous." 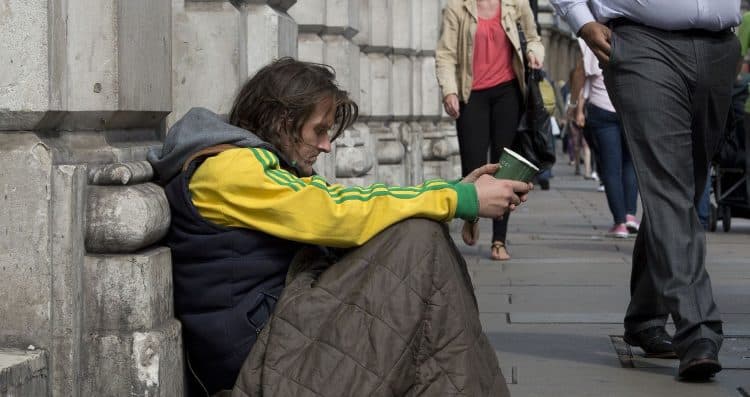 Campaigners have criticised the Government for proposing to continue handing fines to beggars as it consults on replacing an “antiquated” law.

Earlier this year, the Government pledged to repeal the Vagrancy Act – in place since 1824 – which includes fines of up to £1,000 and a criminal record for rough sleeping or begging.

The Department for Levelling-Up, Housing, and Communities on Thursday launched a consultation to replace the act, previously branded “antiquated” by the former secretary of state Robert Jenrick.

He told the PA news agency: “In our experience, it’s completely counterproductive and in many cases cruel to be issuing people with fines to be begging.

“And how are they expected to find the money to pay such fines. It’s always quite ludicrous.

“So we really don’t think that people should be criminalised simply for being destitute and begging – and for us the only instance where that’s at all appropriate is if there’s additional harassment or anti-social behaviour in which case the existing legislation completely covers what’s needed.

“And so I think the Government’s idea of continuing to fine people doesn’t really take us forward from the Vagrancy Act which they have agreed to abolish.”

He said in an earlier statement we “cannot replace one punitive legislation with another targeting people on the streets” and expressed concern the proposals were “far too wide” and could lead to people being punished instead of given help.

“Instead of focussing on measures that may further penalise people on the streets, the Government must instead look at how it can encourage a multi-agency approach.”

The consultation document highlights two case studies which it says outlines how fines “ineffective deterrents” and can be “counterproductive”, with many police forces only seeking to use the current act as a “last resort”, but still goes on to propose the lesser £200 fine.

The fine, it said, could be retained in new legislation as the maximum penalty for “minor begging offences”.

It added serious offences, including those involving exploitation, may require harsher penalties.

Types of harmful begging specified in the consultation include persistent begging, or begging in locations such as transport hubs, entrances to businesses, cash points, or by approaching stopped cars in traffic, as well as fraudulent begging, more than one person begging in an organised way, or begging involving exploitation and coercion.

Rough Sleeping and Housing Minister Eddie Hughes MP said: “No-one should be criminalised simply for having nowhere to live, and it is right that we repeal the outdated Vagrancy Act.

“We must balance our role in providing essential support for vulnerable people with ensuring that we do not weaken the ability of police to protect communities.”