The incident has been described as an act of "state terror and kidnapping." 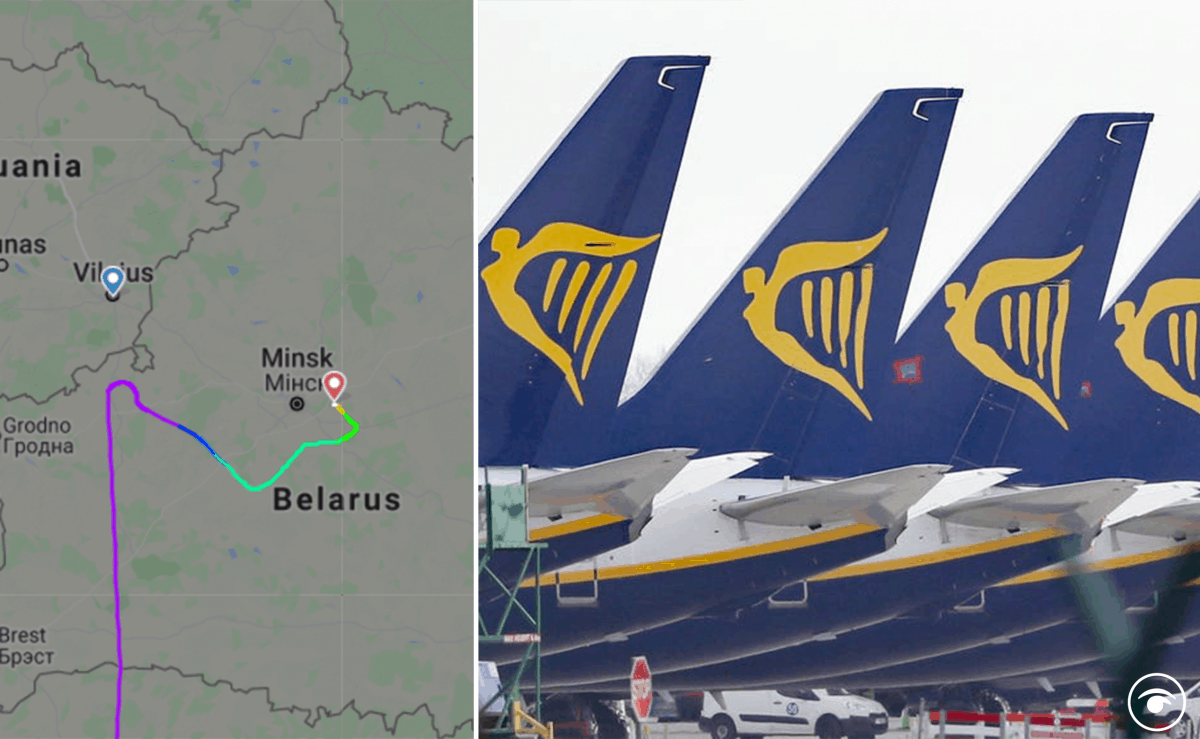 Britain has strongly condemned the arrest of a Belarus opposition activist after the Ryanair flight he was travelling on was diverted from its route to land in the country.

Belarus state media said the aircraft – which was travelling from Athens to the Lithuanian capital Vilnius – was switched to Minsk following a bomb threat.

However, opposition groups said it was an operation by Belarus special services to “hijack” the flight so they could arrest activist and blogger Roman Protasevich.

Foreign Secretary Dominic Raab said he was “alarmed” by the actions of the Belarus government of President Alexander Lukashenko, who is a close ally of Russian President Vladimir Putin.

The UK is alarmed by reports of the arrest of @nexta_tv journalist Roman Protasevich & circumstances that led to his flight being forced to land in Minsk. We are coordinating with our allies. This outlandish action by Lukashenko will have serious implications.

“We are co-ordinating with our allies. This outlandish action by Lukashenko will have serious implications,” he tweeted.

“We are in contact with the airline and EU colleagues,” he said.

Nato secretary general Jens Stoltenberg said the alliance was closely monitoring the “forcible landing” of the flight and the subsequent arrest of Mr Protasevich.

“This is a serious and dangerous incident which requires international investigation.

“Belarus must ensure safe return of crew and all passengers,” he said.

“An act of piracy”

Tom Tugendhat, chairman of the Commons Foreign Affairs Committee, joined counterparts from the US, Ireland, Germany, Lithuania, Latvia, Estonia, Poland and the Czech Republic in condemning the Belarus action as “an act of piracy” and calling for the suspension of all overflights.

“This act of state terror and kidnapping is a threat to all those who travel in Europe and beyond. It cannot be allowed to stand,” they said in a joint statement.

Closely monitoring forcible landing in #Belarus of flight to Vilnius & reported detention of opposition figure Roman Protasevich. This is a serious & dangerous incident which requires international investigation. Belarus must ensure safe return of crew & all passengers.

Others have pointed to the curious nature of the flight path, which appears to show the Ryanair flight perform a near U-turn on its approach to Vilinius.

Look at that flight path…

Complete air piracy of an EU carrier travelling from one EU capital city to another. It’s brazen state terrorism within Europe.

The EU and the rest of Europe need a fast & very strong response to this hostile act. pic.twitter.com/3Eo5JY0B4u

Mr Protasevich was a co-founder of the Nexta TV channel which was declared extremist by the authorities last year after helping to organise mass demonstrations against Mr Lukashenko.

He subsequently fled to Poland and currently faces charges which could carry a prison sentence of up to 15 years.

Belarus state media said Mr Lukashenko personally ordered a MiG-29 fighter jet to escort the flight he was on to Minsk after a bomb threat was received while it was over Belarus territory.

Officials later said no explosives had been found on board while the deputy air force commander said the plane’s crew made the decision to land in the Belarus capital.

The “regime is behind this”

However Lithuanian President Gitanas Nauseda said the plane had been forced to land there, adding the “regime is behind this”.

Exiled opposition leader Sviatlana Tsikhanouskaya called on the International Civil Aviation Organisation to open an investigation into what happened.

“It is absolutely obvious that this is an operation by the special services to hijack an aircraft in order to detain activist and blogger Roman Protasevich,” she said in a statement.

“Not a single person who flies over Belarus can be sure of his safety.”

Belarus endured months of protests last year after hundreds of thousands took to the streets to demonstrate against elections which gave Mr Lukashenko a sixth term in office amid widespread allegations the result was rigged.

Police cracked down hard, detaining around 30,000 people with many suffering beatings while they were in custody.

Related: BLM activist Sasha Johnson in hospital after gunshot to the head