A sea crocodile dubbed the ‘Melksham Monster’ was terrorising the shallow waters off Britain 163 million years ago, according to scientists. The apex predator, with powerful jaws and huge, razor-sharp teeth roamed the prehistoric ocean around Britain in the Jurassic era. The beast – dug up in Wiltshire – was 10 feet long from snout […] 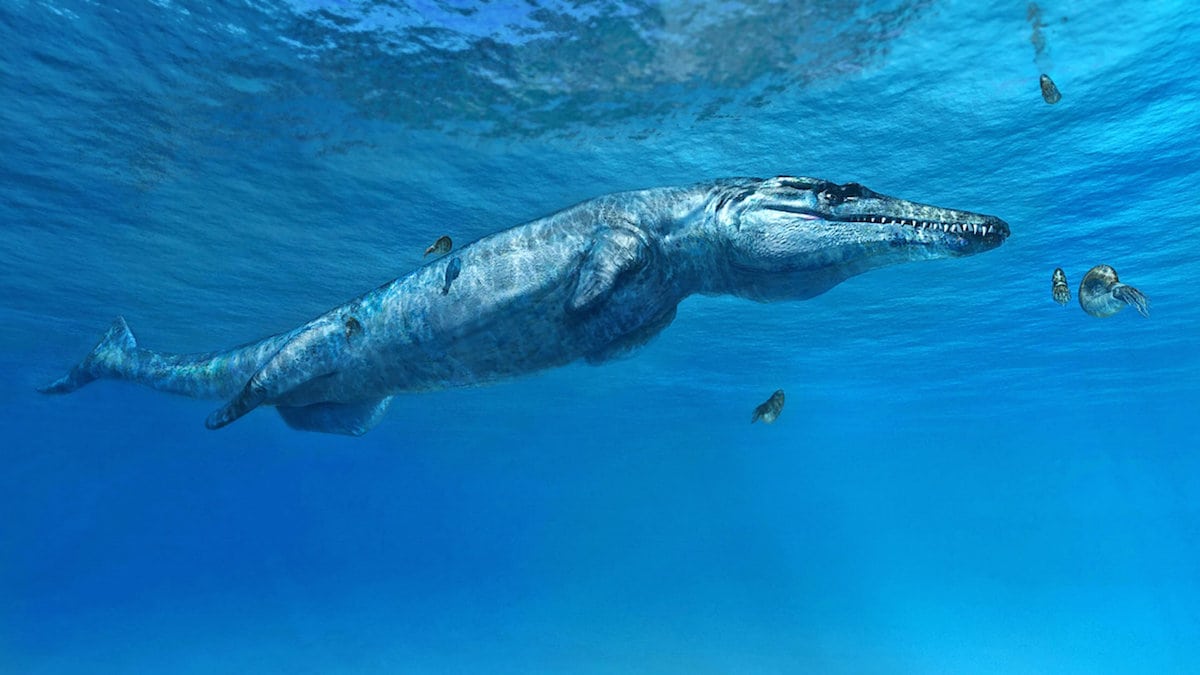 A sea crocodile dubbed the ‘Melksham Monster’ was terrorising the shallow waters off Britain 163 million years ago, according to scientists.

The apex predator, with powerful jaws and huge, razor-sharp teeth roamed the prehistoric ocean around Britain in the Jurassic era.

The beast – dug up in Wiltshire – was 10 feet long from snout to tail and inhabited the warm, shallow waters that covered the country at that time.

It was one of the most terrifying marine reptiles that lived as it swam over a seabed rich in corals and a wide range of shellfish.

The newly discovered species – dubbed the ‘Melksham Monster’ after the quiet market town where it was discovered – was the “apex predator of its time.”

Its big jaws and long, serrated teeth would have allowed it to hunt down large prey such as primitive squid in waters of south England.

The animal sheds fresh light on the origins of the distant relatives of modern crocodiles.

Fossils of its skull, teeth and bones were encased in rock so hard it had to be removed with carbon steel tipped chisels and grinding wheels encrusted with industrial diamonds.

Dr Steve Brusatte, of Edinburgh University’s School of GeoSciences, said: “The Melksham Monster would have been one of the top predators in the oceans of Jurassic Britain – at the same time dinosaurs were thundering across the land.”

At the time the UK’s landmass – as well as much of what is now Europe – was submerged and also lay much further south than it does today.

The Melksham Monster was near the top of the food chain at a time when the waters above it were prowled by big reptiles the size of motor boats.

Its discovery also reveals an extinct group of aquatic reptiles evolved millions of years earlier than was previously thought, said the researchers.

Palaeontologist Dr Brusatte and colleagues identified the animal officially named Leldraan melkshamensis by studying a heavily damaged fossil which has been in the Natural History Museum’s archives for almost 150 years.

They analysed specimen’s acquired by the London tourist attraction in 1875 – in particular distinctive features of its skull, lower jaw and, especially, its teeth. The fossils had been little studied before.

Study leader Davide Foffa, a PhD student in the School of GeoSciences, said: “It’s not the prettiest fossil in the world but the Melksham Monster tells us a very important story about the evolution of these ancient crocodiles and how they became the apex predators in their ecosystem.

“Without the amazing preparation work done by our collaborators at the Natural History Museum, it would not have been possible to work out the anatomy of this challenging specimen.”

Until now it was thought the sub-family of prehistoric crocodiles to which the new species belongs – known as Geosaurini – originated in the Late Jurassic between 152 and 157 million years ago.

But the Melksham Monster – described in the Journal of Systematic Palaeontology – along with detailed re-analysis of existing fossil evidence suggests they evolved millions of years earlier in the Middle Jurassic.

Mark Graham, Senior Fossil Preparator at the Natural History Museum, said: “The specimen was completely enclosed in a super-hard rock nodule with veins of calcite running through, which had formed around it during the process of fossilisation.

“This unyielding matrix had to be removed by force, using carbon steel tipped chisels and grinding wheels encrusted with industrial diamonds.

“The work took many hours over a period of weeks and great care had to be taken to avoid damaging the skull and teeth as they became exposed. This was one tough old croc in life and death!”

The study was carried out in collaboration with the Natural History Museum and funded by Marie Sklodowska-Curie Actions.