Boris Johnson has been urged to impose a national lockdown or risk "human disaster". 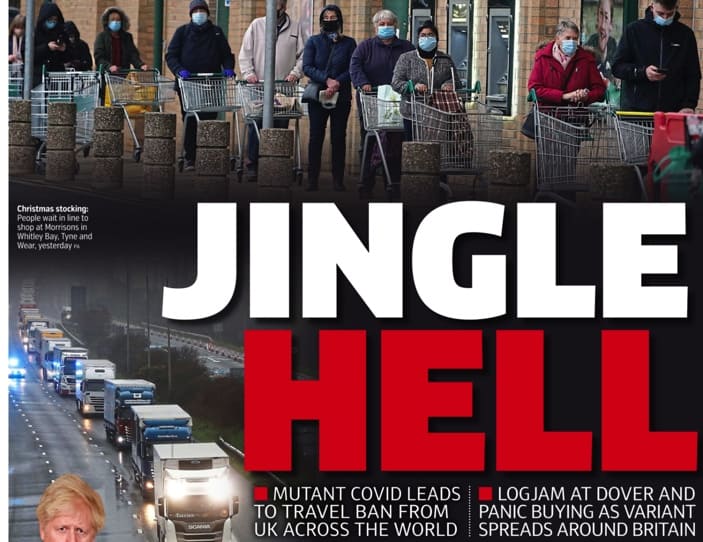 Talks with France on reopening full trade and transport across the Channel are ongoing as the Government’s chief scientific adviser said more restrictions may be needed at home because cases of a mutant strain of Covid were now appearing “everywhere”.

Sir Patrick Vallance gave the grim warning after more than 40 countries banned UK flights because of fears regarding the spread of the coronavirus variant.

It comes as France shut its border with the UK for 48 hours prompting delays for freight lorries heading across the Channel.

Elsewhere, panic buying ensued on the back of the grim news.

Supermarket shoppers have reported seeing queues and empty shelves similar to those from the start of the UK’s first coronavirus lockdown.

Kevin Edger said he had to go to three supermarkets for his shopping in Bridgend, Wales, on Monday after being met with empty shelves in Sainsbury’s – he also queued for almost an hour.

“There were queues everywhere, I saw stockpiling of things like toilet roll again, but with fresh fruit and veg, there wasn’t any,” the 33-year-old said.

“It was like being in a supermarket that hadn’t stocked up in weeks.

“It was crazy. Back like the start of March… (there were) even some people shouting at each other over the last sprouts, talk about Christmas spirit and all that.”

The national newspapers struck a sombre tone as the news rolled out.

The Independent and i lead with news more than 40 countries imposed travel restrictions on the UK following the emergence of a “virulent” new strain of Covid-19.

The Daily Telegraph says Boris Johnson is planning a “mass testing” of lorry drivers in order to alleviate the disruption at the nation’s ports caused by France imposing restrictions on freight.

Meanwhile Metro, The Sun and the Daily Star all lead with a resurgence of panic buying amid concerns over the effect the restrictions will have on food supply.

– Bog roll bandits were bad enough but this. Just who the hell stockpiled lettuce?https://t.co/HbrscHGra9#TomorrowsPapersToday pic.twitter.com/3tudgzEFhx

The Times and Daily Mirror report the mutant strain is continuing to spread throughout England.

The Times 22/12/20
A worried Santa Claus was among passengers at Heathrow yesterday as more countries banned air travel to and from Britain. Photo : Niklas Halle'N/AFP via Getty Images. #tomorrowspaperstoday #thetimes #buyapaper @thetimes pic.twitter.com/gtNGowxY8n

And The Guardian leads with calls from scientists for the PM to impose another national lockdown or risk “human disaster”.