"I'm here this morning to show my child that this kind of Islamaphobic act won't be tolerated. To me, this act seems malicious." 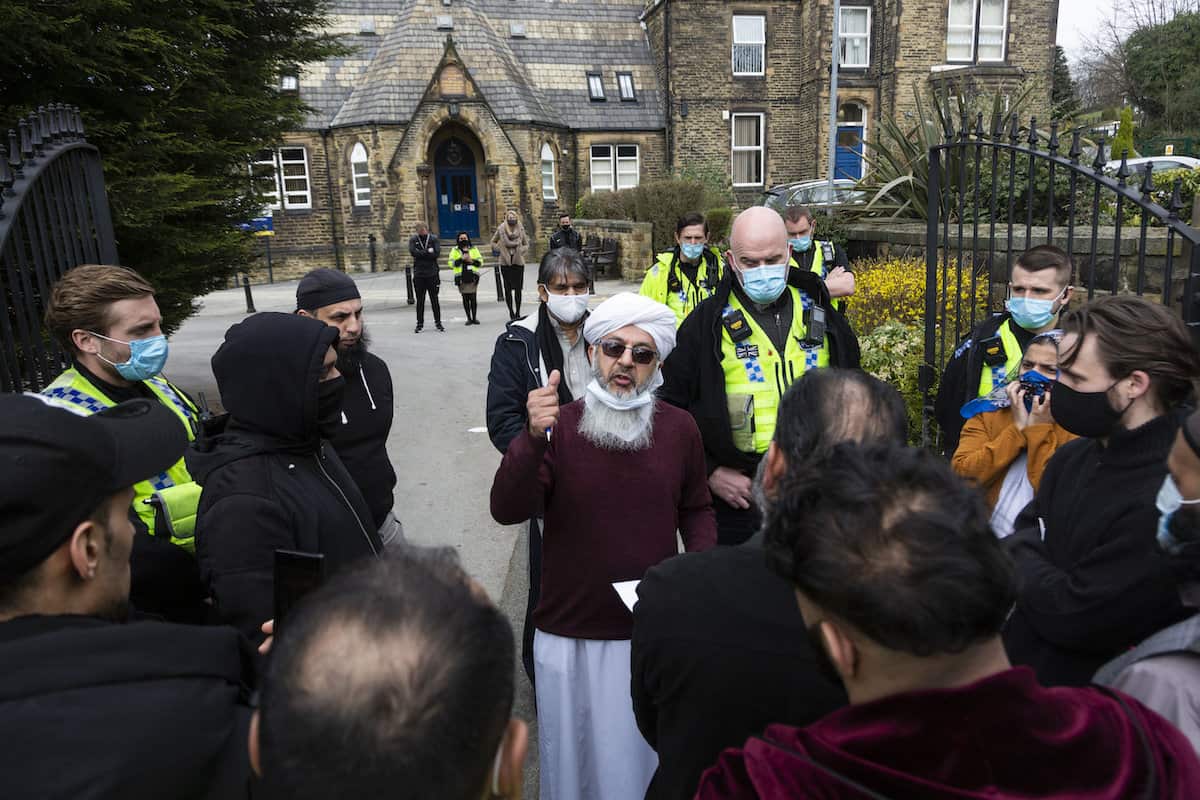 A local community leader speaks to the crowd of parents. Credit;SWNS

A teacher has been suspended for showing his class a cartoon mocking the Muslim prophet Muhammad after hundreds of protesters gathered outside his school this morning.

The protesters outside Batley Grammar School, West Yorks., claim a teacher during a religious studies lesson showed pupils the image on Monday (Mar 22).

They say the cartoon shown was one previously published by French magazine Charlie Hebdo, which has been subjected to attacks over a number of controversial images.

Batley Grammar apologised for the incident yesterday (Weds) and, according to an Imam on the scene who met with the headteacher today, he has now been suspended from his position.

From around 8am this morning more than a hundred protesters, including dozens of students in uniform, gathered outside Batley Grammar to voice their concern.

Three police officers could be seen guarding the school’s front gate while at least four more were patrolling inside its premises.

The road which the school is on was closed off by police, who erected a cordon stretching around 300ft.

Many protesters described the incident as “offensive” and “Islamaphobic” and called for the teacher in question to be sacked and prevented from teaching again.

Community figurehead Imam Mohammed Amin Pandor spoke to the crowd at around 11am immediately following a meeting inside the school with the headteacher, Gary Kibble.

He said: “What happened here, we are disgusted.

“What has happened is totally unacceptable and we have made sure they are aware.

“The teacher has been suspended. They can’t just sack him, they need to do their due process.

“We are going to work with the school to make sure things like this don’t happen.”

He added: “In my opinion this teacher’s teaching days are over.”

The Imam said he had spent time with Mr Kibble this morning discussing the issue and they had debated a statement yet to be released by the school.

It’s thought further meetings between the head and community figures will be staged this afternoon.

The mum of a child at the school said she attended the protest this morning to “show the country Islamaphobia won’t be tolerated”.

The woman in her 40s, who didn’t want to be named, said: “All we are asking for is respect.

“My child has been upset about what happened and so have I.

“I’m here this morning to show my child that this kind of Islamaphobic act won’t be tolerated.

“Do not disrespect our prophet, that’s the message. We need to respect all religions, including Islam.

“To me, this act seems malicious. We know the whole world is sensitive about this topic, look at what has happened in France.

“A religious studies teacher must be aware of these issues.”

She added: “Where in the curriculum does it say to show students these kinds of offensive things?

“As far as I’m aware the answer is nowhere. I can’t get my head around what this teacher thought he was doing.”

Imam Mohammed Amin Pandor said he did not know whether or not the cartoon was part of the curriculum but that the claim is being investigated by the school.

In 2015, two French Muslim brothers, forced their way into the offices of the French satirical weekly newspaper, Charlie Hebdo in Paris where they killed 12 people and injured 11 others.

The principal motive was believed to be hatred for Charlie Hebdo’s cartoon depictions of the Prophet Muhammad.