The Brexit Opportunities minister’s post comes just as the US has labelled the EU’s response to the invasion of Ukraine as “historic”, saying the relationship with the bloc is “vital” – but not mentioning a word about Brexit Britain. 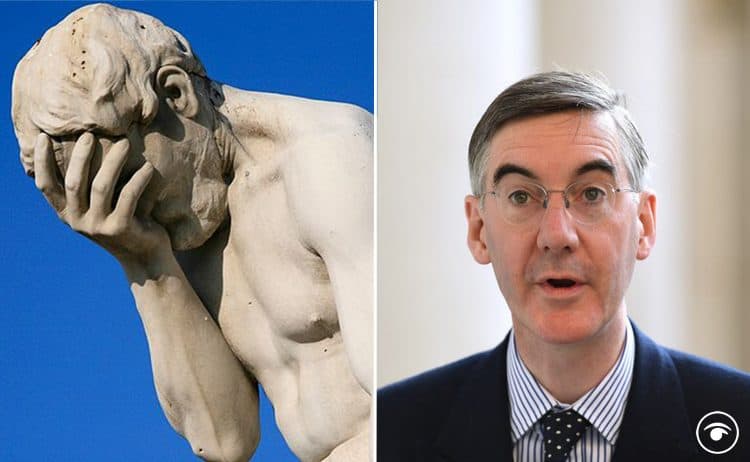 Jacob Rees-Mogg has come under fire after claiming “the City of London leads the way in the effects of sanctioning Russian banks”.

Mogg, who is the new Brexit Opportunities minister, shared a graph to back up his claims of leading the way in tackling the Ukraine invasion – but appeared to use flags emojis and did not mention the source of the figures.

It cited the total value of Russian bank assets sanctioned by the UK as £258.8 billion, which he compared to the United States and the EU – citing them as £240 billion and, respectively, £38.8 billion.

And political commentator Adam Schwarz said: “Never trust a graph with no source for its figures, especially when it looks like it was made using a combination of PowerPoint and ClipArt on Windows 98.”

Journalist Tony McDonough added: “There is no source for this, there is no context to these figures. These numbers are just plucked out the clear blue sky.”

One Twitter user labelleg Mogg’s post as “interesting.” “If this is correct, it reveals that the Tories assisted Russian oligarchs to ‘hide’ almost as much money through UK connections as the whole of the EU and USA combined,” he said.

He added: “Is that why the Putin’s oligarchs were so keen to back Brexit and ‘reward’ the Tories?”

Another Twitter user also suggested that the reason why the UK sanctioned assets of higher value is “perhaps because the oligarchs have more assets stashed in UK”.

“What would that amount to as a percentage of total Russian assets held in the UK?,” a third person wondered.

Just as US praises ‘historic response’… of EU

The Tory minister’s post comes just as the US has labelled the European Union’s response to Russia’s invasion of Ukraine as “historic”, saying the relationship with the bloc is “vital” – but not mentioning a word about Brexit Britain.

American government official and diplomat Antony Blinken’s praise of the EU comes after a speedy bloc-wide response saw Europe imposing a wave of sanctions on Russia – just as the UK government was accused of opening a loophole by allowing Russian state-owned VTB Bank individuals and entities to “wind down” assets within 30 days.

The EU has also announced it is welcoming Ukrainian refugees into member countries for three years without requiring them to apply for asylum – whilst the UK Home Office has insisted Ukrainian refugees must not attempt to come to Britain without a “valid visa”.

Speaking to journalists, Blinken said: “What the European Union has done over the space of a couple of weeks is quite simply remarkable. The speed with which it acted, the actions that it took both with regards to the sanctions and also support for Ukraine, are, I think it’s not an exaggeration to say, historic.

“And it only further validates for us the importance of this partnership. We are faced together with what is president Putin’s war of choice, unprovoked.”