“No worries, I’ll just wait for my internet to come back on after the latest missile strikes to get that all important online application filled in," one UK lawyer said. 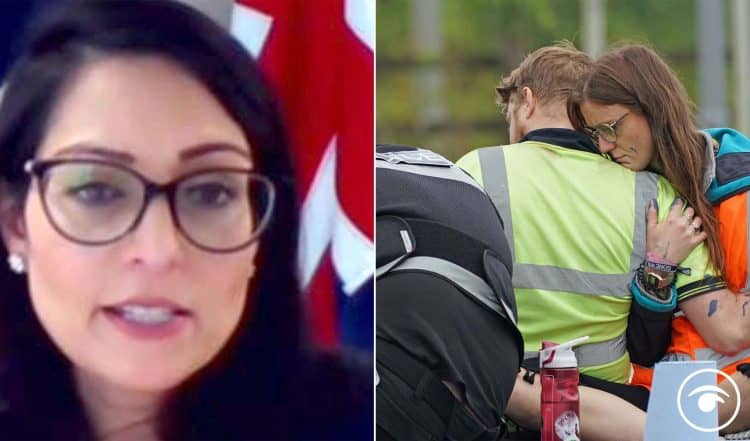 The Home Office has come under fire after the latest “update” for Ukrainian refugees fleeing war with Russia.

Posting on Twitter last night (Wednesday), Priti Patel’s department has urged Ukrainians fleeing their country in the face of terror to “not attempt to travel to the UK without a valid visa”, which they have to apply for.

The government’s ‘Ukraine Family Scheme’ is now allowing immediate family members to apply, whilst extended family members can only apply from Friday.

The Home Office said family members will have to first complete an online application form, then book an appointment with a Visa Application Centre in Europe and attend a VAC appointment for “accelerated security checks”.

But they warned Ukrainian applicants to “remain in the location” where they submitted their application until the Home Office contacts them.

Needless to say, dozens of people have hit out at the Home Office’s scheme.

Some urged the UK government to “match what the EU is doing”.

One Twitter user pointed out Ukrainians seeking asylum in the EU are being granted “full acess” to the bloc and will receive a resident permit, acces to education and jobs under a plan which will come into force this week.

“Bureaucracy can’t exist in the middle of a humanitarian crisis. The UK looks cold and uncompassionate by comparison,” another user added.

Assistant professor in social policy Matt Donoghue highlighted Ukrainian refugees are made to go through several steps by the UK, whilst Ireland, “a country over ten times smaller”, can “simply waive visa requirements”.

And EU migrants campaigner Alexandra Bulat rejected the requirement for Ukrainians to have a valid visa before travelling to the UK. “There is no legal duty or obligation to claim asylum and remain in the first safe country,” she said.

UK immigration lawyer John Vassiliou said in response to the Home Office announcement: “No worries, I’ll just wait for my internet to come back on after the latest missile strikes to get that all important online application filled in.”

Meanwhile, several academics stepped in too. Catherine Briddick, forced migration lecturer at the University of Oxford said: “These rules are exposing people to lethal violence and serious harm. They are in breach of the UK’s obligations under international law. You do not need permission to seek, and receive, international protection.”

And Professor Tanja Bueltmann, chair in International History at the University of Strathclyde, added: “As Ukrainians try stand up to Putin—also protecting our peace as they do so; as many are killed and their cities bombed into the ground, this is what the UK Government has to say to them. It is beyond appalling.”