"Stop The Coup" demonstrations have been held across England, Scotland and Wales. 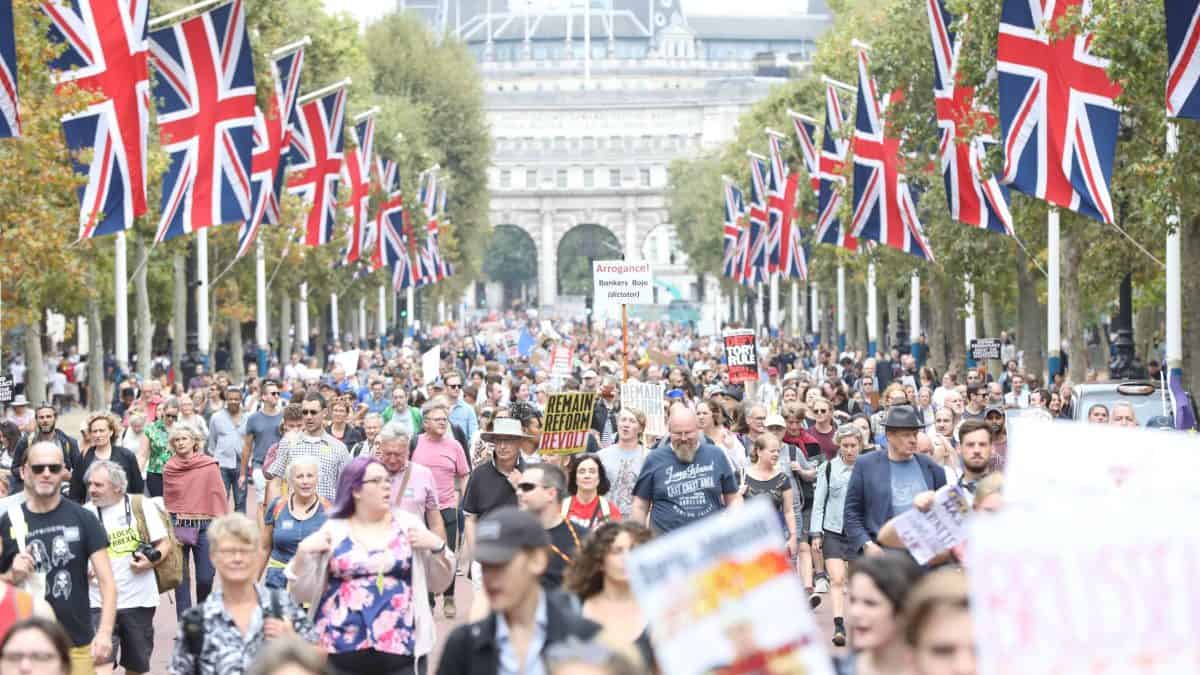 Jeremy Corbyn has told Boris Johnson: “No way, it’s our Parliament,” at a rally against the PM’s plans to suspend Parliament.

The Labour leader was speaking in front of thousands of people at a People’s Assembly Defend Democracy demonstration in Glasgow’s George Square, as similar protests took place across Britain.

The Prime Minister should “think on”, he said, adding: “It’s not on and we’re not having it.”

“Nobody voted to lose their rights or give up on democracy.”

He said he supports the protests across the country, adding: “Demonstrations are taking place everywhere because people are angered and outraged about what is happening.

“Angered that the Government and a Prime Minister elected by 93,000 members of the Tory party is trying to hijack the needs, aims and aspirations of 65 million people.

“Well think on, Boris, it’s not on and we’re not having it.

“Fundamentally this is an issue of democracy.

“One thing I’m absolutely clear on is that nobody voted to lose their rights or give up on democracy.”

Mr Corbyn paid tribute to the history of protest in George Square by those calling for justice and civil rights.

He added: “Today we are standing in the footsteps of those who have gone before us to achieve that justice and those rights.

“I’m proud to be here with all of you supporting that, to say to Boris Johnson: No way, it’s our Parliament.

“No way do you take us out without a deal – we will stop you and give the people their rights and their say to determine their future.”

Mr Corbyn called for all parties to come together in the House of Commons on Tuesday, when Parliament reconvenes after the summer recess, to prevent a no-deal Brexit.

He also said the Government should “stand aside” for a general election, arguing it does not have the confidence of a majority of people or of MPs.

#Stopthecoup protests in locations across the UK

Large-scale protests against the Prime Minister’s controversial plan to suspend Parliament have been taking place in city centres across the country.

Chants of “shame on you” were directed at Boris Johnson by demonstrators outside Downing Street on Saturday, as streets around Westminster were brought to a standstill.

Crowds more than a thousand strong gathered for rallies in cities including York, Manchester, Newcastle and Bristol.

There were dozens of protests planned across the UK on Saturday organised by anti-Brexit campaign group Another Europe Is Possible, which has called for daily demonstrations to take place.

Protesters gathered outside Oxford University’s Balliol College, which was attended by Mr Johnson, to express their displeasure about his handling of Brexit.

Lesley McKie, who was demonstrating at the college with her family, criticised the “undemocratic actions of Boris Johnson and (senior adviser) Dominic Cummings”.

Denouncing the Prime Minister outside the institution where he established his “political profile” sends “a powerful message to Johnson and others leading this coup”, she added.

She told the crowds: “We cannot allow Boris Johnson to shut down Parliament and to shut down the voice of ordinary British people.”

After speaking at a demonstration in her Brighton constituency, former Green Party leader Caroline Lucas thanked those who turned out to protest, adding: “This is what democracy looks like.”

Westminster Bridge was blocked by protesters, who were shouting: “If you shut down our Parliament, we shut down your bridge.”

A small group of counter-protesters also demonstrating in central London unfurled a banner reading “Brexit Now” by the Cenotaph.

Chris McHugh, 33, who works for Labour MP Liz Twist and was demonstrating in Newcastle, said the protest was about “protecting democracy”.

He added: “The fact that thousands have taken to the streets of Newcastle today is so telling.”

They were also being held in towns including Bodmin in Cornwall and Clitheroe in Lancashire.

Alena Ivanova, from Another Europe Is Possible, said: “Today’s protests are the beginning of something huge – they have been inspiring, full of youth and diversity and energy.”

She added that the daily protests must “grow into the millions” in “the centre of every town in the country”.

The protests were triggered by the PM’s decision to suspend Parliament for up to five weeks ahead of the October 31 Brexit deadline.

Opponents claimed the move was aimed at stopping discussion of Brexit and hampering cross-party efforts to block the prospect of a no-deal withdrawal from the European Union – an allegation denied by Mr Johnson.