A sign marking the precise location where England cricketer Ben Stokes was involved in a bar brawl has appeared on Mbargo in Bristol. 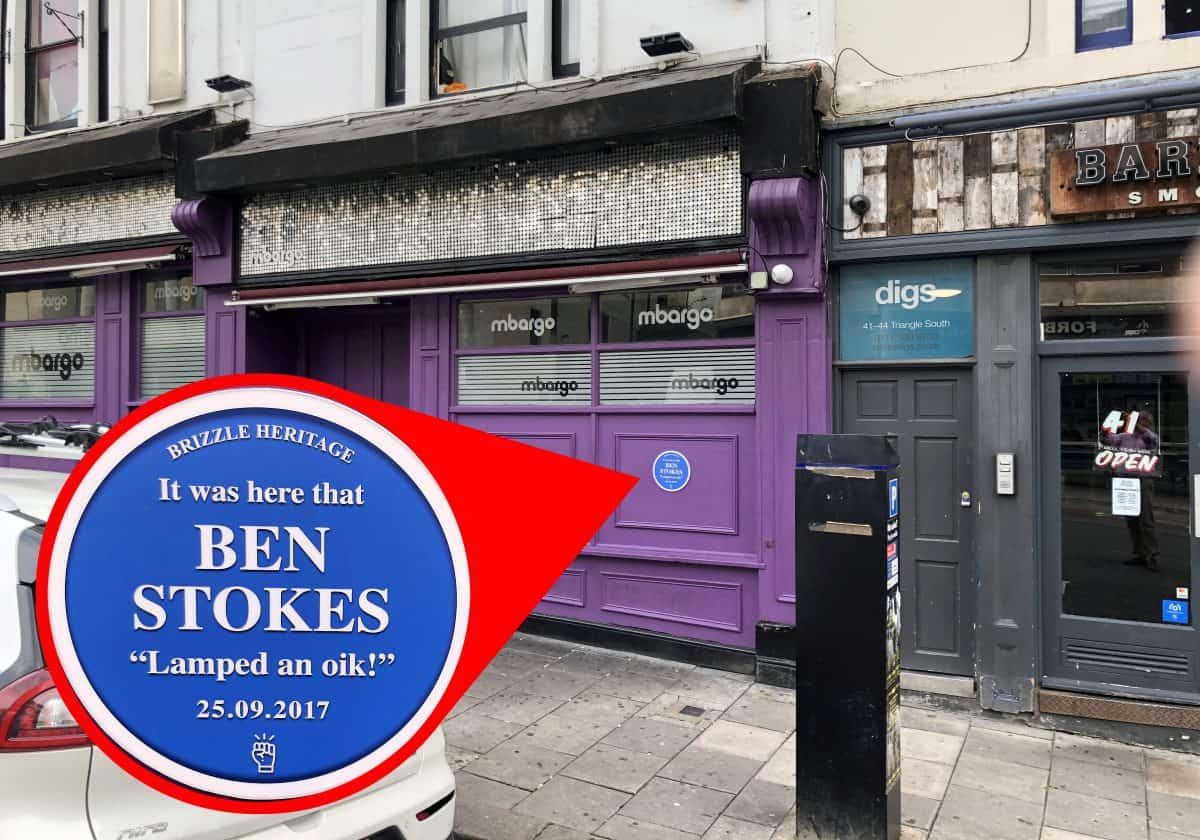 A mysterious sign saying “It was here that Ben Stokes lamped an oik” has appeared outside the nightclub where the England cricketer was filmed punching a man.

The sign marking the precise location where England’s Ashes hero was involved in a bar brawl that almost cost his career has appeared on Mbargo, in Bristol.

The gay couple who Ben Stokes defended in the brawl after they had endured homophobic abuse called for the cricket legend to be knighted after an extraordinary innings last week at Headingly. The cricket star spurred England to Ashes victory with a match-winning 135 not out.

Kai Barry, 28, and William O’Connor, 22, said the Queen should reward the England player for his Ashes-saving innings a year after he was cleared of affray over the brawl.

Now a round blue plaque has appeared, honouring Stokes’ performance in last year’s altercation. The replica of a commemorative plaque refers to an altercation outside the bar in September 2017 which jeopardised his cricket career.

It was spotted by letting agency owner, Peter Ellis, from Bristol, at around 9am today. Peter, 56, says he walks past Mbargo on his way to work every day and says he’s never seen the sign before.

It’s not known who is responsible for erecting the plaque, which is believed to have been put in place overnight.

Stokes was found not guilty of affray in August 2018, but evidence presented at Bristol Crown Court showed Stokes throwing punches during the incident.

CCTV cameras captured the incident as it happened and footage shows Stokes, 28, punching Ryan Hale, aged 27 at the time, during a fight.

The street brawl happened at around 2am outside Mbargo and also involved Stokes’ teammate, Alex Hales.

Stokes lost his England vice-captaincy and a place on an Ashes tour after footage of the fight, which left two men unconscious, was published online.

The court heard how Stokes said he had “stepped in” to defend two gay men who were being verbally abused, before having to defend himself from Ryan Ali, aged 28 at the time, and Hale.

The sportsman told Bristol Crown Court that he was defending a gay couple from a potential homophobic attack.

“These men were speaking to the gay guys in what I would call a harsh and abusive way,” Stokes said at the time.

“It was homophobic in nature. It wasn’t at all like banter.”

The jury found the 27-year-old cricketer not guilty in 2018. He was cleared of any wrongdoing and reintegrated into the England Cricket squad soon after the trial concluded last year.

The plaque, titled ‘Brizzle heritage’, features the date the bar brawl happened and a boxing glove.

It includes the phrase “It was here that Ben Stokes lamped an oik”.

His remarkable innings helped England to secure one of the greatest comebacks world cricket has ever seen.

His performance led to him being lauded as a national hero by fans, teammates and the wider cricketing world.