Sturgeon said that whoever gets the job “the change of Tory leader seems virtually certain to be accompanied by a shift even further to the right”. 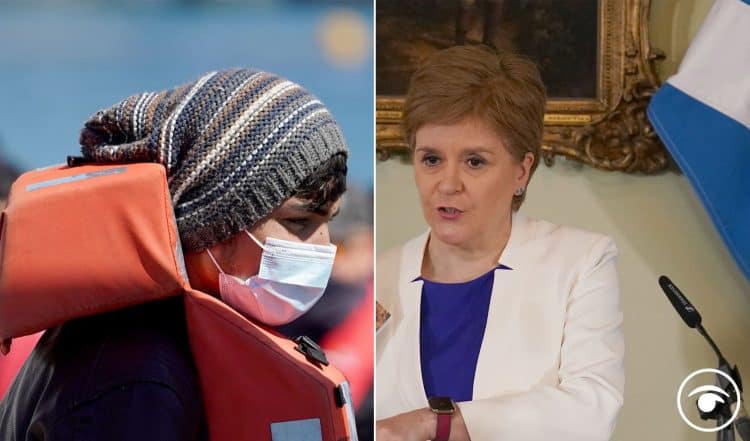 Irish premier Micheal Martin has said the UK Government’s Rwanda scheme may have resulted in an increase in international protection applicants in the Republic.

It comes as Nicola Sturgeon spoke out against any new Tory PM as she launched a new paper aimed at making the case for Scottish independence.

The Taoiseach made the comments after it emerged on Wednesday night that Ireland had a “severe shortage” of state accommodation for Ukrainian refugees.

Speaking from Government Buildings on Thursday, Mr Martin said that of those at the reception centre for Ukrainians at Citywest in Dublin, 70% are now international protection applicants.

“We will be analysing this, but something has happened in the last two to three months in terms of the surge within international protection applicants, something has clearly happened,” the Taoiseach said.

“Anecdotally or intuitively, one can see, and maybe sense that that policy announcement, which I thought was a wrong policy announcement by the UK, a shocking sort of initiative in my view, to be doing some agreement with Rwanda, clearly may have motivated people utilising the Common Travel Area to come into the Republic – yes, I think it is one of a number of factors.”

The UK  is facing a “shift to the right” in politics whoever becomes the next Prime Minister, Nicola Sturgeon said, as she insisted independence was now “essential”.

With the Conservative Party currently in the process of electing a successor to Boris Johnson, the Scottish First Minister hit out at the “democratic deficit” facing voters north of the border.

The SNP leader hit out as she launched the second paper in a series from the Scottish Government aimed at making a fresh case for Scotland to leave the UK.

Speaking at her official residence, Bute House in Edinburgh, Ms Sturgeon insisted: “Offering Scotland the choice of independence, particularly in the context we are in today, is essential.”

As Tory MPs seek to narrow down the candidates vying to be the next party leader and UK prime minister, Ms Sturgeon said that whoever gets the job “the change of Tory leader seems virtually certain to be accompanied by a shift even further to the right”.

This would take Westminster “even further away from the mainstream of Scottish opinion and values”, she added, raising fears of possible cuts to public services and “more posturing over Brexit” in the future.

The First Minister said: “We may be just a few days into this Tory leadership contest but it is already crystal clear the issues Scotland is focused on: tackling child poverty; supporting NHS recovery; building a fairer economy and making a just transition to net zero; will be hindered, not helped, by whoever becomes prime minister in the weeks ahead.”

The Tories have not won an election in Scotland since 1955, but Ms Sturgeon said voters north of the border had “repeatedly” returned a majority of elected representatives who support independence.

Related: MPs demand answers over post-Brexit card fees hike and there is only one reply