Temperatures in the interior of the Atlantic country were forecast to hit 44C (111F) during the day. 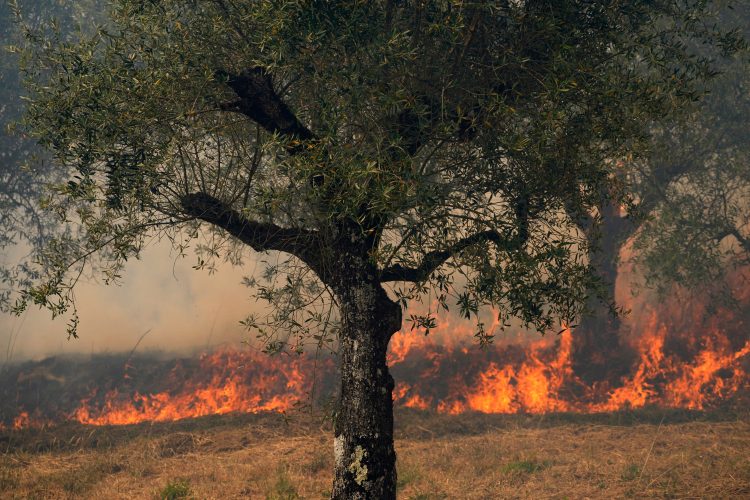 More than 3,000 firefighters are battling alongside ordinary Portuguese citizens desperate to save their homes from several wildfires that have raged across the European country, fanned by extreme temperatures and drought conditions linked to climate change.

The central part of the country has been particularly hard hit by a spate of blazes this week.

In the village of Bemposta, residents used garden hoses to spray down their lawns and the roofs of their houses in the hope that they could save them from the raging wall of red flames that approached through the wooded hills late on Wednesday.

“It began spreading towards that way (the right), the wind was blowing that way towards the mountain,” said 88-year-old Antonio Carmo Pereira, while pointing to the flames on the outskirts of his village.

“I could see the view, but in a few minutes I couldn’t see anything, just smoke.

“I am afraid, but where can I go? Jump into a water tank? Let me stay here and look.”

More than 800 firefighters still fought on in the Leiria district, where Bemposta is located, on Thursday morning.

Temperatures in the interior of the Atlantic country were forecast to hit 44C (111F) during the day as the mass of hot and dry air blown up from Africa continues to linger over the western edge of the Iberian Peninsula.

In June, 96 per cent of Portugal was classified as being in either “extreme” or “severe” drought.

The hot air and parched ground, combined with winds, has created the perfect cocktail of severe fires.

Portuguese Prime Minister Antonio Costa said on Thursday that with temperatures expected to remain unusually high for the coming days his government plans to extend a state of alert for wildfires until Sunday.

The week-long alert was originally declared to run until Friday.

The government has temporarily barred public access to forests deemed to be at special risk, banned the use of farm machinery and outlawed fireworks.

Mr Costa said that firefighters had to respond to 200 different blazes on Wednesday and pleaded for his fellow citizens to take extra care when in the countryside.

“More than ever, we are the ones who must be extremely careful,” Mr Costa said. “From a small act of carelessness a great tragedy can be born.”

About 10,000 hectares (24,700 acres) have been scorched this week in Portugal, according to the Civil Protection Agency.

About 865 people had been forced to evacuated their homes over the past week, although many had returned by Thursday.

More than 30 homes and other types of buildings had been damaged.

Civil Protection commander Andre Fernandes said that 160 people, including at least 70 firefighters, have been injured so far, but that there are no confirmed fatalities from the fires.

Portugal has improved its fire safety since wildfires killed more than 100 people.

The European Union has urged member states to prepare for wildfires this summer as the continent faces another extreme weather shift that scientists say is being triggered by climate change.

Neighbouring Spain was still combating a fire started by a lightning strike on Monday in the west-central Las Hurdes area that has consumed about 3,500 hectares (8,600 acres).

Temperatures in many parts of Spain have been topping the 40C (104F) mark for several days and are expected to continue to do so through to next week.

In France, two fires raged out of control in the region around Bordeaux in south-west France for a third consecutive day, despite the efforts of 1,000 firefighters and water-dumping planes to contain them.

The fires have destroyed more than 3,850 hectares (9,500 acres) of forest and grassland in the region, the regional emergency said.

It said firefighters struggled to contain the fire because of high winds and difficulty accessing the heart of the fires.

More than 6,000 people were evacuated from campgrounds and villages in recent days.

Related: New coal mine would be ‘monumental mistake’ that ‘epitomises climate hypocrisy’