Pointing to a French fishing boat on the horizon, he said: “What infuriates me the most is… for me to sell my stuff into Europe I’ve got to fill out 10 bits of paper. 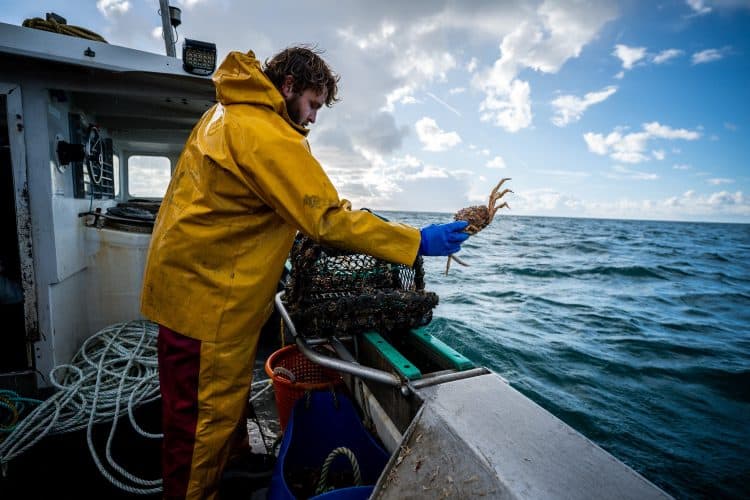 A Jersey fisherman has accused some of his French counterparts of having “no respect” and cutting shellfish pot lines amid anger over Brexit.

Third-generation fisherman Jack Bailey, who catches lobster and crab aboard his 20ft boat, said piles of red tape have put the island’s fleet at a disadvantage.

Despite getting on well with many French fishermen, he said there needs to be a “level playing field”.

However he refuses to give up the trade he has worked in for 20 years, saying: “I won’t back down no matter what the French do.”

The Channel Island of Jersey – located just 16 miles off the French coast – is caught up in a row between France and Britain over fishing licences.

French President Emmanuel Macron has threatened to block British boats from landing their catches in French ports if the situation is not resolved.

Speaking to the PA news agency on Wednesday aboard his boat White Waters, 25-year-old Mr Bailey called for much of the paperwork faced by the Jersey fleet to be scrapped.

Pointing to a French fishing boat on the horizon, he said: “What infuriates me the most is… for me to sell my stuff into Europe I’ve got to fill out 10 bits of paper.

“It’s got to get all checked by the vet, but he can fish alongside me, go back to France that day and not have any of that paperwork.”

Mr Bailey, who has worked on fishing boats since he was five, suggested that is “discrimination”.

He added: “I know they’ve got to make a livelihood as well, but it’s just got to be a fair playing field… it’s got to be level.

“If one end’s gaining more, the other’s going to be pissed off… that’s what a lot of the Jersey fleet are feeling like now.”

Referring to differences in how Jersey and French boats go about fishing, he said: “We’re going north and south and they’ll be shooting their nets east and west and they’ve just got no respect, they’ll just cut it.

“You’ll be missing pots out of your string..

Asked how the seabed is divided up, Mr Bailey said it is a “gentlemen’s agreement”.

“Sometimes he’ll shoot his pots over the top of you, you just rejoin them, just out of respect.

“The last couple of years with the French they haven’t bothered, they’ve just gone ‘oh you’ve started this, we’re finishing it’.”

He said the last two years, following the Brexit vote, have been the “worst years I’ve known it”.