Johnson went straight from Glasgow to a men-only members' club for a reunion of Daily Telegraph columnists. 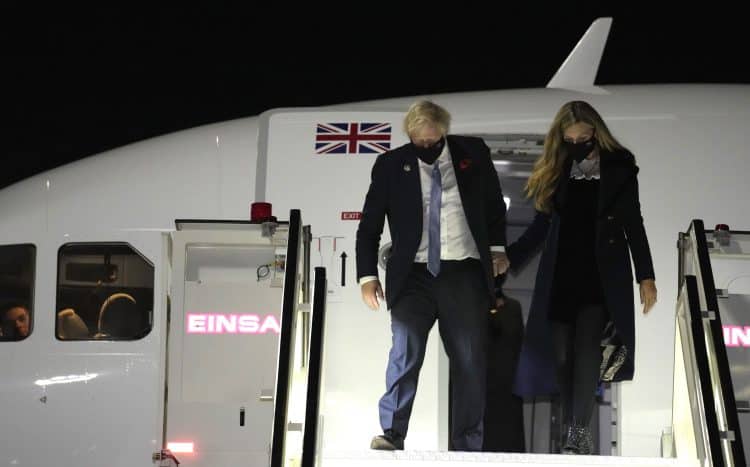 Boris Johnson flew out of the COP26 climate summit on a private jet to attend a dinner with a former Daily Telegraph editor at an exclusive men-only club in central London.

The Daily Mirror said the Prime Minister left the conference in Glasgow at 6.20pm and arrived at London Stansted at 7.16pm – before heading to the private Garrick Club for a dinner with a host of former Daily Telegraph journalists.

Johnson was snapped leaving the club at 10pm, accompanied by Lord Moore – his former boss and a self-confessed climate change sceptic.

The dinner was understood to have been a reunion for Telegraph writers, where Johnson was formerly employed as a £250,000 a year columnist – a fee he once described as “chicken feed”.

“After warning world leaders it’s one minute to midnight to prevent climate catastrophe, Boris Johnson clocked off from Cop26, jumped in his private jet and flew down to London for dinner at a gentleman’s club with a self-confessed climate change sceptic.

“It seems that when it comes to taking action to tackle the climate crisis, there’s one rule for the Conservatives and another rule for the rest of the world.”

A Downing Street source said Johnson had always been due to leave Glasgow on Tuesday evening, as the element of the summit involving world leaders drew to a close.

Johnson’s flight out of Glasgow was confirmed by the Prime Minister’s official spokesman on Monday.

Pressed on why Johnson could not go by train for a journey within the UK, the spokesman said it was important he was able to travel round the country while facing “significant time constraints”.

Lord Moore told the Mirror: “I can’t say anything about it.”

Johnson last year appointed Lord Moore – his former boss – to the House of Lords. Moore, a biographer of Margaret Thatcher, has blamed climate change activists for pursuing a “project fear” agenda – and said there was no proof the planet is facing a “climate emergency”.

He is a self-confessed climate change “sceptic”, but rejects the term “climate change denial”, suggesting it is “deliberately libellous”.

Appearing on BBC Question Time in 2018, Moore said: “I think a lot of people who are obsessed about climate change have a sort of project fear. They are trying to make us do things because everything is about to collapse. It is a problem but the human race is very adaptable.”

And, writing in the Telegraph this weekend, he said: “Rather than honestly confronting the growing practical difficulties, our leaders preferred to frighten the public with the idea of “emergency”. No emergency has been proved.”

The 190-year-old Garrick Club is facing a campaign to admit female members. Just over 50 per cent voted to make the shift in 2015 – falling short of the two-thirds majority required.