“To the UK government, my message to them is that human beings are human beings," one refugee from South Sudan said. 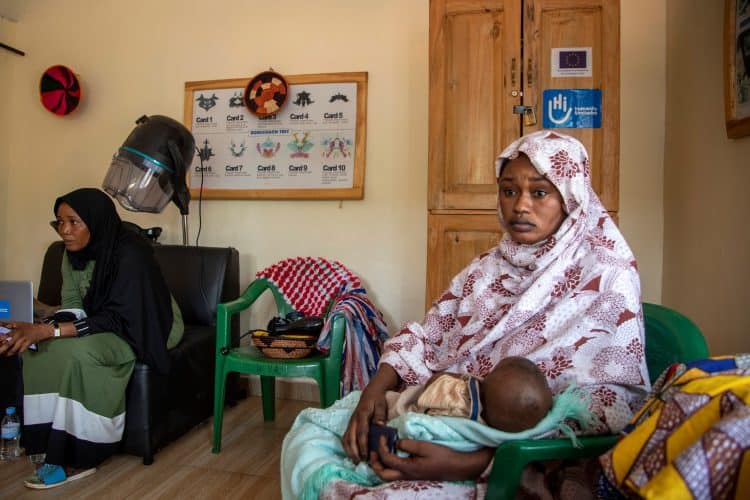 Refugees living in Rwanda have warned of the challenges facing those due to arrive on a flight from Britain.

Asylum seekers who were resettled in the east African country under earlier arrangements have told the Associated Press the new arrivals can expect a difficult time.

“Sometimes I play football and in the evening I drink because I have nothing to do,” said Faisal, a 20-year-old from Ethiopia who was relocated to Rwanda from Libya in 2019 in the first group of refugees resettled under a deal with the United Nations.

“I pray daily to God that I leave this place.”

Giving only his first name out of fear of retaliation, he remains at the Gashora centre built to house refugees who had languished in Libya while trying to reach Europe.

Gashora is called a transit centre but some like Faisal see nowhere to go.

The UK Court of Appeal on Monday refused to stop the Government from deporting asylum seekers to Rwanda despite arguments that the planned flights would undermine the “basic dignity” of people escaping war and oppression.

Rwanda is one of the most densely populated countries in the world and still among the least developed despite its focus on modernising since the country’s 1994 genocide.

The migrants who sought better lives in Britain are expected to find fewer chances to pursue their dreams here, even as Rwandan officials describe their country as having a proud history of welcoming those in need.

One of those who has found a foothold is Urubel Tesfaye, a 22-year-old from Ethiopia who is happy he found a part-time job in a bakery in Rwanda’s capital, Kigali. But his friends speak of moving on to Canada or the Netherlands.

“They have a disease in the head and cannot settle here,” he said of their determination to move.

“They have a disease in the head”

Rwandan President Paul Kagame told diplomats in Kigali after the agreement with Britain was signed in April that his country and the UK are not engaged in buying and selling people, but instead trying to solve a global migration problem.

Home Secretary Priti Patel said at the time that “access to the UK’s asylum system must be based on need, not on the ability to pay people smugglers”.

Rwandan authorities have said the agreement would initially last for five years, with the British government paying £120 million upfront for housing and integrating the asylum seekers. Britain is expected to pay more as Rwanda accepts more migrants, although the exact number of people the UK is expected to send is not known.

Those set to arrive under Rwanda’s new agreement with Britain will be housed in shelters around Kigali with features like private rooms, televisions and a swimming pool. At one, the Hope Hostel, a security guard patrols outside, and clocks in the lobby show the times in London and Paris.

“This is not a prison,” manager Bakinahe Ismail said.

But the Gashora centre for previous arrivals in a rural area outside the capital offers more basic shared living facilities instead.

“The UK government, my message to them is that human beings are human beings. You cannot tell them ‘Go and stay here’ or ‘Go and do this or that.’ No. Because if they feel better in the UK, then the UK is better for them,” said Peter Nyuoni, a refugee from South Sudan.

“There is nothing for me to want to stay here,” he said.

Even those who came straight to Rwanda to escape troubles at home say the country, while peaceful, is not easy.

“When you are not employed, you cannot survive here,” said Kelly Nimubona, a refugee from neighbouring Burundi. “We cannot afford to eat twice a day. There is no chance to get a job or do vending on the street.”

Sensitivities around the arrival of the first asylum-seekers from Britain are so high that Rwandan officials are barring media from interviewing the new arrivals.

“Maybe later when they have settled,” said Claude Twishime, spokesman for the ministry of emergency management, which will take charge of their care.

Rwanda is already home to more than 130,000 refugees and migrants from other African nations and countries such as Pakistan, the government has said.

The prospect of taking in more is criticised by some in Rwanda. Opposition leader Victoire Ingabire has said the government instead should focus on the internal political and social issues that push some Rwandans to become refugees elsewhere.

For years, human rights groups have accused Rwanda’s government of cracking down on perceived dissent and keeping tight control on many aspects of life, from jailing critics to keeping homeless people off the streets of Kigali. The government denies it.

Some Rwandans said the local economy is not ready to handle the people arriving from Britain.

“Look, many people are unemployed here,” said Rashid Rutazigwa, a mechanic in the capital. He said he did not see many opportunities even for people with skills and training.

“But if the government promises to pay salaries to (the migrants), then it will be fine,” he added.