A 52 million year old ankle fossil dug up in France shows the first primates were high flying acrobats… throwing human evolution on its head. The shape and size of the tiny bone suggests our earliest ancestors flexed and sharply extended their ankles – to launch into the air. They spent most of their time […] 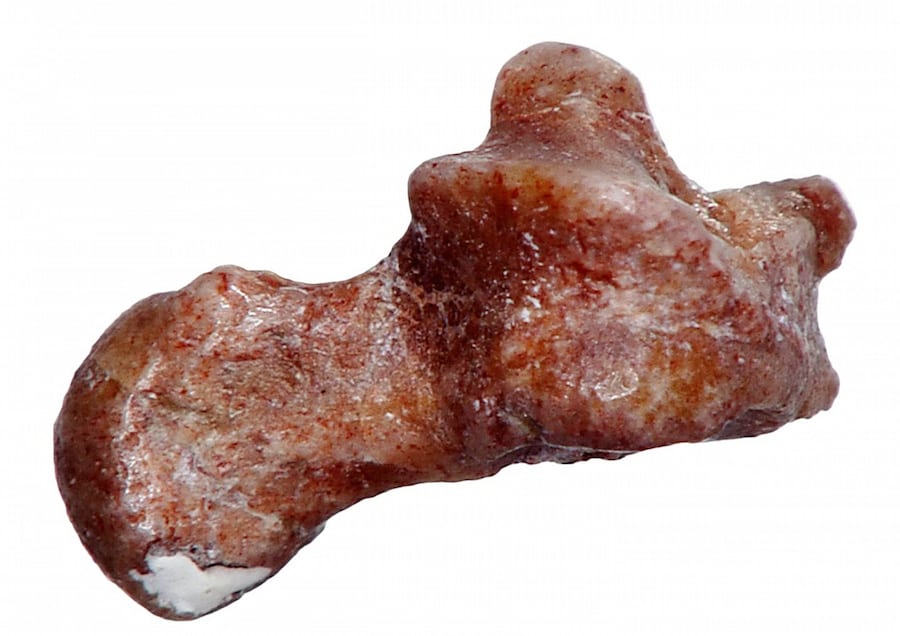 The shape and size of the tiny bone suggests our earliest ancestors flexed and sharply extended their ankles – to launch into the air.

They spent most of their time in the branches rather than on the ground, but just how nimble they were as they moved around in the treetops has been hotly disputed.

For years, scientists believed the ancestors of today’s humans, monkeys and apes were relatively slow and deliberate animals, using their grasping hands and feet to creep along small twigs to stalk insects or find flowers and fruits.

But the new study published in the Journal of Human Evolution says the first primates, which were about the size of a chipmunk, were masters at leaping through the trees.

Paleontologists uncovered the bone, which measures just a quarter of an inch, while working in a quarry near Marseille, in south eastern France.

The fossil came from the lower part of the prehistoric creature’s ankle joint, and came from the bizarre chipmunk-like Donrussellia provincialis.

Previously only known from jaws and teeth, Donrussellia is thought be one of the earliest members of the primate family tree, on the evolutionary branch leading to lemurs, lorises and bush babies.

Professor Doug Boyer, of Duke University, North Carolina, and colleagues studied scans of Donrussellia’s ankle and compared it to other animals.

Using computer algorithms to analyse the 3-D digital shape of each tiny bone, they were surprised to find Donrussellia’s ankle was not like those of other primates, but more similar to those of tree shrews and other non primate species.

The researchers also found the animal did not just clamber or scurry along small branches, where it could reach flowers, fruits and insects.

Instead, it may have been able to bound between trunks and branches, using its grasping feet on landing.

Prof Boyer said, contrary to what many scientists thought, the first primates may have evolved their acrobatic leaping skills first.

The anatomical changes that allowed them to cling to slender branch tips and creep from tree to tree came later.

Explained Prof Boyer: “Being able to jump from one tree to another might have been important, especially if there were ground predators around waiting to snag them.”

Many biologists have argued the common ancestor of all primates was a small animal that scampered along thin tree branches.

Primates first appear in the fossil record about 57 million years ago and quickly divided into the ‘wet-nosed’ group that now include lemurs and the ‘dry nosed’ one represented by tarsiers, monkeys, apes and humans.

They each have common features including grasping hands and feet and nails rather than claws, implying they evolved in the same common ancestor.

Archicebus achilles, described in 2013, had a long hindlimb and short forelimbs, which are characteristic of a leaping animal.

Prof Boyer said: “Donrussellia and Archicebus are definitely on opposite sides of the tree. So when they both have the suggestion of leaping traits, it starts to look like acrobatic leaping behaviours were important early in primate evolution.”

If primates did begin as leapers, it will be harder to work out what drove their initial evolution.

Prof Boyer said: “It is easy to understand how specialisation for navigating small branches would be beneficial, specifically for harvesting food objects that grow there.

“It is hard to think of a simple scenario that would emphasise acrobatic leaping on its own.”

Other fossils suggest the first primate had extraordinarily long fingers, which would be a weird combination of features.

Prof Boyer said: “So you have this animal that was very acrobatic, probably leaping from large diameter supports – tree trunks – but at the same time it had almost monstrously long fingers that go beyond what is required for grasping.”

He added: “But the insane thing is, researchers have discovered skeletons of fossil animals called apatemyids that appear just a few million years before the first primates, and have this same anatomical pattern.”

Apatemyids are not directly related to primates, but their similarities to the earliest primates may provide important clues about how our distant ancestors lived.