Tory MPs faced anger from their constituents after an amendment that would have placed a legal duty on water companies not to pump waste into our rivers was voted down. 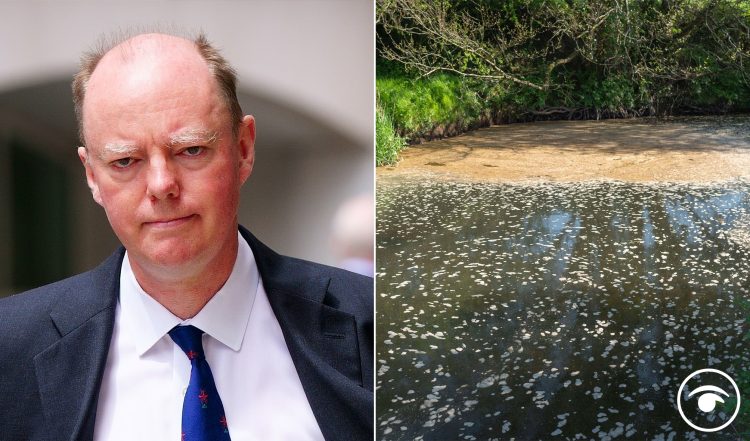 It comes as Professor Chris Whitty has been vocal on the pollution of the UK’s waterways.

South West Water adds to a growing list of water suppliers to come under investigation as the watchdog probes how all wastewater companies manage their treatment works.

In March of this year, the regulator said it had serious concerns over the sewage treatment works of five water suppliers – Anglian Water, Northumbrian Water, Thames Water, Wessex Water and Yorkshire Water.

David Black, Ofwat chief executive, said: “As we gather and analyse more information, including data on storm overflow spills, our concerns have grown further about South West Water’s operation of its wastewater assets and environmental performance.

“As a result, we have opened an additional enforcement case into South West Water.”

Tory MPs faced anger from their constituents in which an amendment to the environment bill that would have placed a legal duty on water companies not to pump waste into rivers was voted down.

Only 22 Conservatives rebelled against the government last week, after the environment secretary, George Eustice, recommended that MPs vote against the amendment.

Chris Whity tweeted: “Keeping human faeces out of the waterways people use recreationally is a key public health intervention. Water companies can and should act on sewage and effluent discharge.”

There was a lot of reaction to Whitty’s post:

Pennon said: “We will continue to work openly and constructively with Ofwat to comply with the formal notice issued to South West Water as part of this ongoing investigation.”

Wastewater assets are the physical components of wastewater systems, they include pipes, manholes, pumps and storage tanks.

Mr Black added: “We have now opened enforcement cases against the majority of wastewater companies in England and Wales.

“From what we have seen so far, the scale of the issue here is shocking – companies must resolve any problems at wastewater treatment works and do so quickly.”

Ofwat said that the companies in focus may change as developments are made and it will be writing to the remaining wastewater companies to “request updates on the progress of remediation plans they submitted to Ofwat in December”.

A South West Water spokesman said: “We are taking Ofwat’s decision very seriously, we will provide any further information required as part of its review into South West Water.

“It is important that Ofwat and the public can have ongoing confidence in our commitment to the environment.

“We will continue to work openly and transparently with Ofwat as part of their industry-wide activity.”

Mike Keil, senior director of policy, research and campaigns at the Consumer Council for Water (CCW) – which calls itself the voice for water consumers in England and Wales, called on all six companies to “urgently act” to fix any harm they might have caused.

“It’s a betrayal of customers’ trust and expectations if a sewerage company fails to comply with its basic duties and puts at risk the health of rivers and habitats for wildlife that the majority of people have told us they want to see improved – not undermined,” he said.

“All six of the companies facing the threat of enforcement action should now urgently act to ensure they are complying with their responsibilities and fixing any harm that might have been caused.”

South West Water has previously been fined for sewage spills, including one period of time in which it was fined after a repeat sewage spill at South Sands Beach in Devon.

Sewage leaked from a manhole at South Sands Beach in 2012 and again during the Easter bank holiday in 2017.

The company had to pay more than £60,000 because it failed to follow warnings from the Environment Agency from 2012.