The actor said he wondered if Tory spin doctors thought a message about telling the truth ‘wouldn’t look great in Boris Johnson’s hands’. 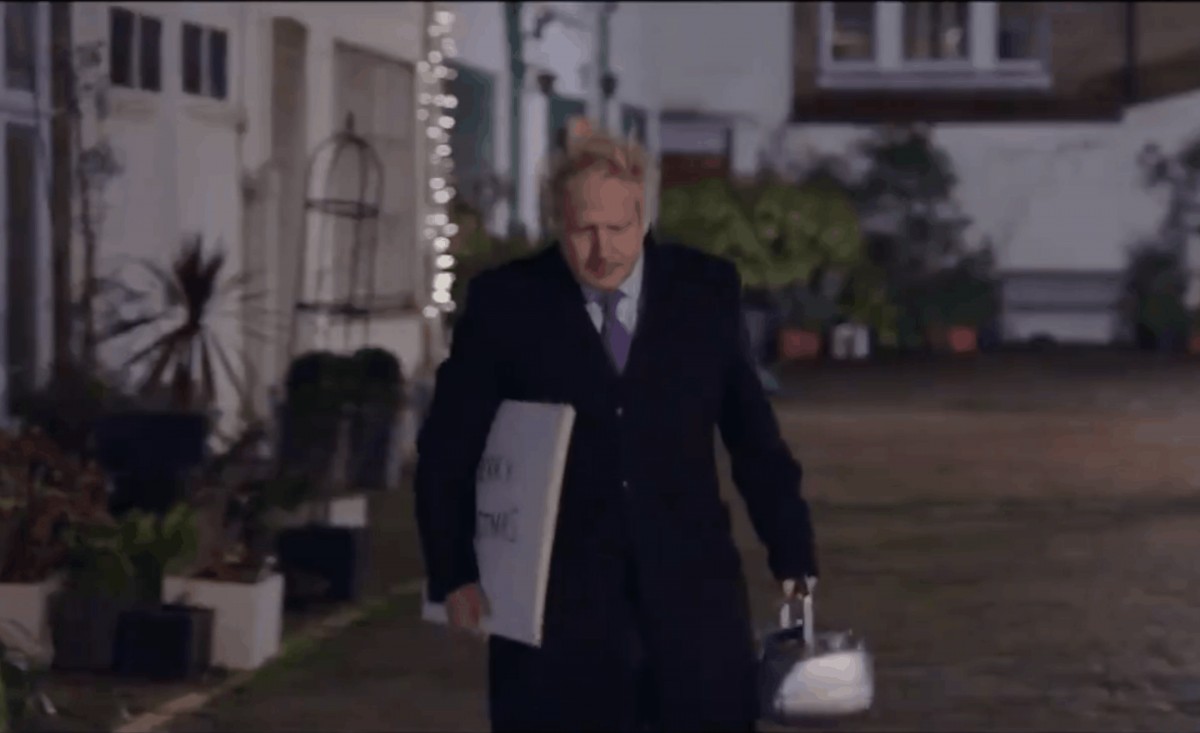 Hugh Grant has given a withering response to the Love Actually spoof campaign video by the Conservatives.

The clip sees Boris Johnson emulating a scene from the 2003 Christmas film by silently holding up Brexit-themed messages to a woman at her front door after pretending to be a carol singer.

Grant, who played the Prime Minister in the movie, today quipped about the amount of money spent on it, wondering how much of that was Russian – after revelations of huge donations to Johnson and the tory party from Putin cronies that could explain why they have sat on the Russian interference report until after the election.

“As someone who loves this country and has five children now,” he warned Today Programme listeners, “we are staring into an abyss” and he would do all he could to help elect non-Conservative candidates and deprive Johnson of a majority.

He urged people to vote for a party that would allow the country to have a final say referendum now people are more aware of what Brexit entails, explaining “69 out of the last 70 national opinion polls have come to the conclusion that we want to stay in the EU. It’s only democratic to give the people another chance.”

In the original scene in Love Actually, Lincoln’s character appeared opposite Keira Knightley’s character to profess his love to her.

In Johnson’s version, called Vote Conservative Actually, the Prime Minister holds up two placards that read: “With any luck, by next year we’ll have Brexit done (if Parliament doesn’t block it again).”

Other placards say: “Your vote has never been more important, the other guy could win, so you have a choice to make between a working majority or another gridlocked hung parliament.”

“Enough, let’s get this done,” Johnson says at the end of the parody clip, directly referencing the original scene once more while walking away from the woman’s house.

Less than half an hour after the campaign video had been launched, Dr Allin-Khan tweeted to say the Prime Minister had copied her spoof.

She wrote: “I won’t be retweeting it – but Boris Johnson has copied my #ElectionActually video. Tanks. On. The. Lawn.”

The video was shared by Johnson on Twitter is a stark contrast to Labour leader Jeremy Corbyn’s own pop culture-inspired campaign message.

In a video entitled Mean Tweets With Jeremy Corbyn, he reads out critical tweets about him in a format popularised by US late-night chat host Jimmy Kimmel.

He sits by a fireplace and reads out negative online messages about him and the Labour campaign.

Addressing some of the bizarre accusations against him, the Labour leader quips: “What is a commie hat? I wear a cap! It’s a bit like when I was told I was riding a Maoist bicycle. It’s a bicycle!”

After addressing Labour manifesto promises on broadband and tuition fees, he reads out a tweet about being found sexy.

“Oh this is bad,” Jeremy Corbyn says, later telling viewers there was a magic money tree… “in the Cayman Islands”.

READ MORE: Fuming Boris Johnson: Constant questions about my dishonesty not my fault