Trusts have also been ordered to ensure that “ambulances are not used as additional ED (emergency department) cubicles”. 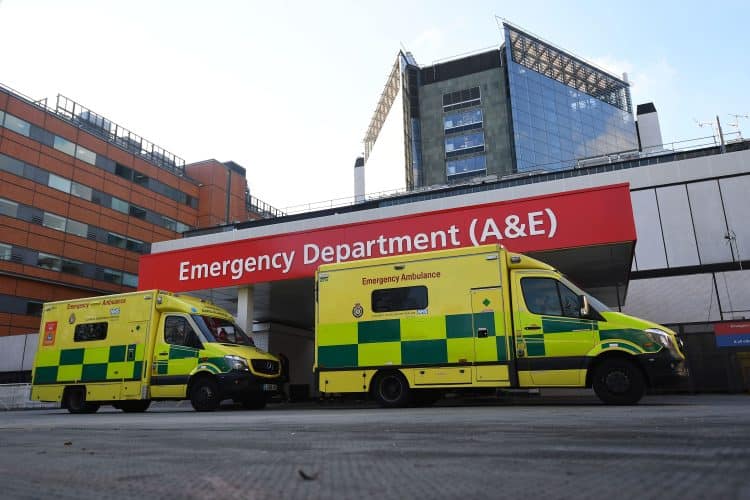 Hospitals in England have been to be ordered to “eliminate” ambulance queues outside hospitals after two deaths were linked to handover delays.

NHS bosses highlighted the “risk to patient safety” in the letter which tells trusts to end all handover delays.

Ambulance leaders have described the “highest level of emergency activity in history” and reports from around the country paint a bleak picture of ambulances queuing for hours outside busy hospitals.

An investigation was launched after it was reported that a patient died at Worcestershire Royal Hospital following a five-hour wait in an ambulance at the doors of the emergency department.

And it has also been reported that a woman died in the back of an ambulance following a handover delay at Addenbrookes hospital in Cambridgeshire.

It comes as West Midlands Ambulance Service raised its risk rating for handover delays to its highest possible level for the first time in its history.

The risk rating shows that the trust believes that patient harm is “almost certain” due to the handover delays.

Documents from the trust board show one patient was cared for by ambulance staff for “over 13 hours” and on October 4 average handover times were “hours” instead of minutes.

“Unfortunately, there have been several cases where severe patient harm has occurred due to the hospital delay,” the documents state.

The separate letter from NHS England bosses to all acute hospitals states that handover delays represent “unacceptable clinical risk” for both for patients waiting in ambulance queues and those in the community whose emergency care is delayed.

“Given current performance and the risk to patient safety, we must however press to identify further solutions to eliminate all handover delays,” it states.

It adds that patients should be considered under the “responsibility” of the hospital from the moment the ambulance arrives.

Trusts have also been ordered to ensure that “ambulances are not used as additional ED (emergency department) cubicles”.

“It is important that patient safety is prioritised and as a result we emphasise that corridor care is unacceptable as a solution,” according to the letter from Professor Steve Powis, national medical director for the NHS in England, and the organisations national director for emergency and elective care Pauline Philip.

“We are now asking you to work together as a system and agree what actions you would need to take to immediately stop all delays.”

Patients who arrive at hospital by ambulance are supposed to be handed over from paramedics to hospital staff within 15 minutes.

Martin Flaherty, managing director of the Association of Ambulance Chief Executives, said: “The ambulance sector is experiencing some of the highest levels of emergency activity in its history and this is regrettably leading to delays in the sector’s ability to respond to some patients.

“AACE remains extremely concerned about the unprecedented levels of hospital handover delays which are occurring across the UK.

“These have increased significantly since April resulting in long waits for patients to be admitted to ED and a reduction in our ability to respond to patients in the community.

“These delays are in part due to the need to maintain social distancing in ED’s alongside the unprecedented pressures in the whole urgent and emergency care system at present.

“We are especially concerned about the numbers of delays of over 60 minutes which is where we believe most of the harm associated with these delays occurs.

“These delays simply must be addressed as a priority in order to minimise harm and allow ambulance services to respond effectively to patients in the community.”

He said that all ambulance trusts are operating under their “highest level of escalation”.

It comes as the NHS experienced its busiest September on record, according to the latest performance data for the health service in England.

Major A&Es treated over 1.39 million people during September, the highest ever for the month.

Ambulances responded to a record 76,000 life threatening call-outs, while 999 took nearly one million calls in September.

NHS 111 also saw record demand taking a call every seven seconds and over 1.9 million calls in total across August.