Armed police surrounded the man, who had a lighter, before he was sprayed with a fire extinguisher and then sectioned under the Mental Health Act 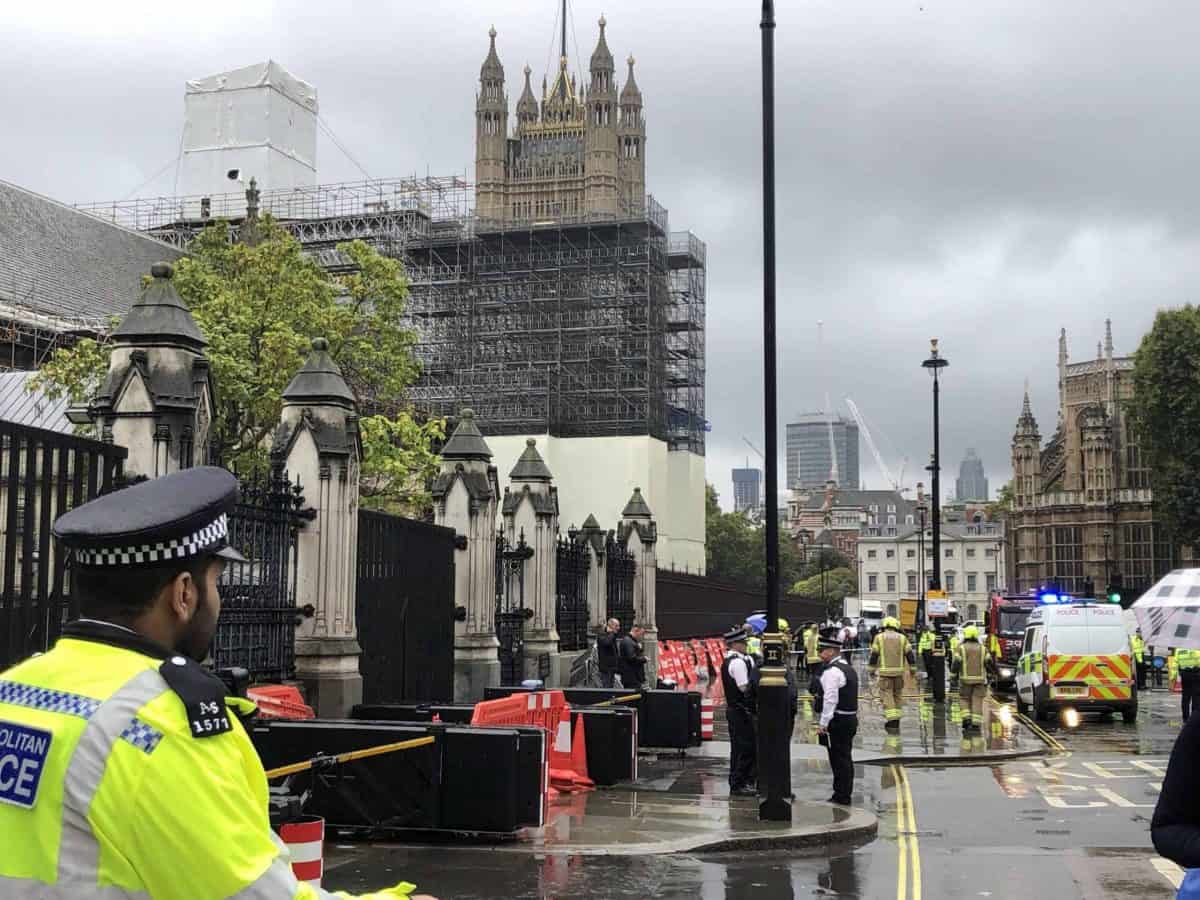 A man doused himself with petrol outside Parliament today in front of horrified protestors before being detained under the Mental Health Act.

Shocked eyewitnesses said he was quickly surrounded by armed police and hosed down with a fire extinguisher before being led away.

They said the ‘Middle Eastern-looking’ man, wearing a red anorak, approached Old Carriage Gates in Parliament Square shortly before 11am this morning .

He threw a bunch of leaflets in the air before reaching into a bag and produced a two-litre bottle containing a clear liquid which he emptied over himself.

People at the scene said that the smell of the liquid made clear that it was petrol.

The man was quickly pinned down by armed police, who shouted at members of the public to run away, before a fire engine arrived on the scene to hose the man down.

Eye witness Richard Davey, 67, said: “I was standing by the lamppost five yards away from Old Carriage Gates when this chap turned up wearing a red anorak.

“He threw some leaflets around – I couldn’t make out what was on them – and then started pouring a clear liquid over himself, it looked like lemon and lime to me.

“Then someone said it was petrol and somebody shouted ‘run, run, run!’ So I did, and came over to this island in the middle of the road and shouted to the police to get over there.

“They came over and pinned him down, and then someone came out from the compound to spray him down before all the emergency services arrived.”

He added: “It all happened so quickly that I wasn’t that scared to be honest.

“I was at Harrods in 1975 when there was a bomb scare, and you just pick up your kids, go downstairs and get on with it. This was a bit more panicked than that, though.”

A pro-Brexit protestor was right next to the man in the anorak when he doused himself with petrol.

Russell, who did not want to give his surname, said: “We were stood by the Old Carriage Gates minding our own business.

“I had my back turned, facing towards Parliament.

“Next thing I know this Middle Eastern-looking bloke came up behind me and starts throwing lots of leaflets about.

“Then he got this bottle out of his bag, a two litre bottle, and at first I thought it was water. But then he poured it all over himself – loads of it.

“We got further down the road and I shouted over two coppers. I said, ‘Officers! Get over here, the bloke’s got petrol.’

Retiree Val Bateson said: “I just missed it, but I heard that someone had put petrol over himself and was prevented from lighting it – and the police and an ambulance were here.

“It would have been a terrible tragedy. The fire engine had to hose him down, and the pavement too to make it safe for the public.

“I am so glad that a very tragic event was avoided by the quick thinking of the police and the public, and that they prevented the poor fella from taking his own life.”

A Met Police spokesman said: “Officers became aware of a man dousing himself with, what appeared to be, a flammable liquid at Old Carriage Gates, Westminster,
at 10.44am.

“The man, who had a lighter, was sprayed with a fire extinguisher.

“There was no ignition and the man was detained.

“Firefighters made the scene safe by dispersing the suspected flammable liquid.

“The man was assessed by paramedics and taken to a central London hospital.

“He has been detained under the Mental Health Act. There were no reports of any injuries.”

He added: “The area affected has now been reopened.”