There was widespread solidarity with the workers including from Van Morrison and singer Tommy Sands, who performed at the gates 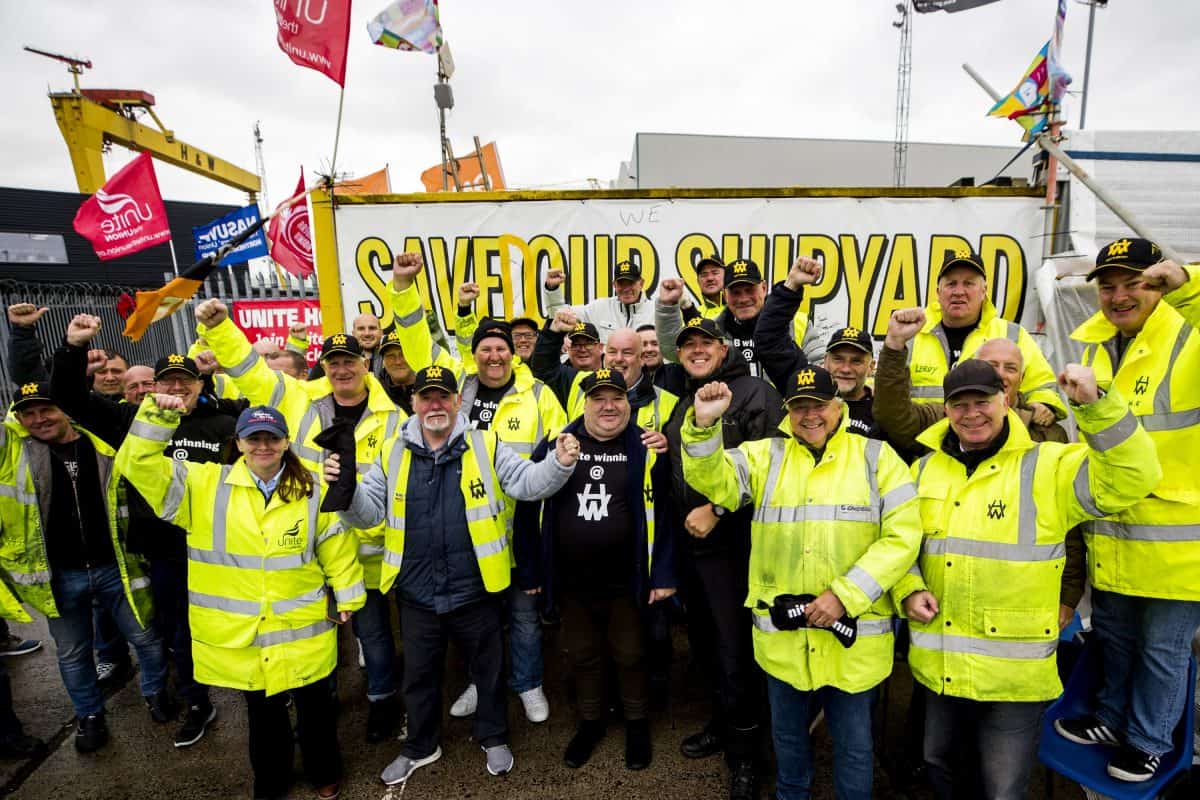 There was a feeling of vindication among workers at the gates of Harland and Wolff as news broke that a buyer had been found for the troubled shipyard.

It was nine weeks to the day on Tuesday since workers at the historic site announced their Save Our Shipyard occupation.

They remained on site around the clock through sun, wind and rain, adamant in their belief that the shipyard could be saved.

As the days and weeks wore on, support for the workers sitting at the gates was shown by a constant sounding of beeps from passing cars, to donations of food and drink, and some giving up their time to sit with them.

Former workers at the historic shipyard also turned out to show support, with men aged in their 90s among those who took the opportunity to leave their handprints in concrete on the site.

The occupation even became a feature of city sightseeing tours, while east Belfast-born singer Van Morrison was among those who sent messages of solidarity.

Visitors to the site included shadow chancellor John McDonnell as well as Newry singer Tommy Sands, who performed a song he wrote for the workers.

Occupation leaders took their campaign from the gates to Stormont where they bonded with Irish language activists, even learning slogans in the tongue, before travelling to speak at the TUC conference in Brighton in September.

On Tuesday morning, the mood was exhausted elation after workers were brought together to hear the news they had been hoping for.

There were huge smiles as the Save Our Shipyard banner was amended to We Saved Our Shipyard, cheers as the campaign chant was updated as well as hugs for the union officials Susan Fitzgerald (Unite) and Denise Walker (GMB), who have been with them throughout.

Steelworker Joe Passmore, one of the most prominent spokesmen for the workers, said they have been vindicated.

“We’ve created our own future, we’ve always known what the potential of this place is,” he told workers.

“We always knew the skills that we had, and we always knew that given the chance the workforce of this place could make Harland and Wolff great again.

“So when we go back through those gates, that is exactly what we are going to do, we’re going to show the world what we’re capable of.

“Be very proud of yourselves because what we have achieved here is fantastic and I hope the world takes notice.”

He told the PA news agency that he hopes they will be back to work later this week.

“What we are hoping for is, we’ll give everyone a rest and possibly Thursday (to be back at work) but we have got to confirm that yet.

“There’s a few formalities to go through at the minute, but we had a good talk with the workforce in there and they know that the hard work really begins now and we are going to start as we mean to go on.”

Ms Fitzgerald said the occupation is proof that workers can win when they stand together, backed by their trade union.

“That’s the message we want to go out to other workers, particularly the workers in Ballymena right now who are dealing with the closure at Wrightbus. We’ll be going up this Friday en masse to support them,” she said.

Ms Walker added: “The victory today is payback for the nine weeks that the workers have sat out here, it’s a vindication that they were right, they believed this yard had a future and they weren’t prepared to stand by and let anybody come in and asset strip and mothball the yard, and these guys have worked hard to make sure there is a future not just for themselves, but for the skills that they bring for future generations still to come.”