The Prime Minister’s official spokesman said the Government made ‘no apology whatsoever for seeking to remove serious foreign national offenders’. 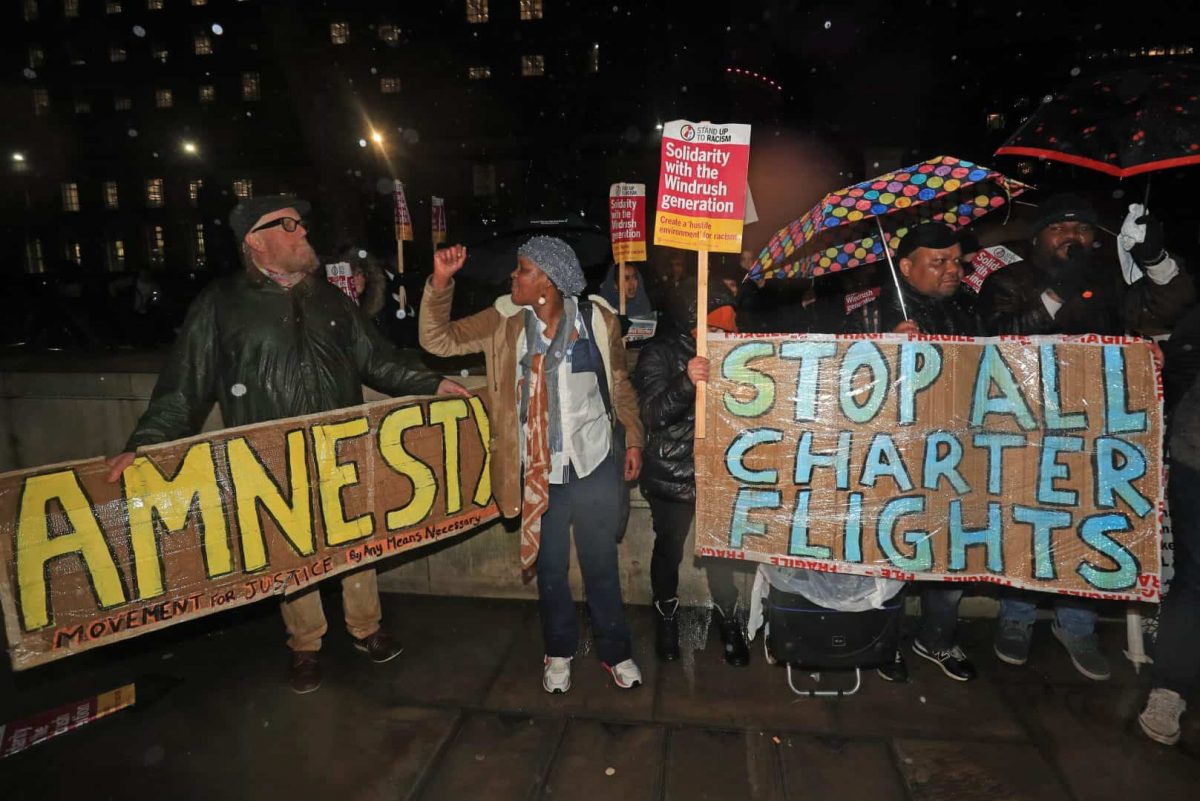 Protests across Westminster against the chartered deportation flight (PA)

The cases of eight people who were due to be deported to Jamaica are being reviewed by the Home Office after fresh legal representations were made.

Some 50 people were originally expected to be on the chartered deportation flight that left the UK at around 7.30am on Tuesday.

But it took off with 17 on board after a last-minute legal battle between the Government and human rights campaigners.

“British in every meaningful way”

Officials and ministers have said all were foreign criminals who committed serious offences.

But campaigners, supported by 150 MPs, say they came to the country as children, are “British in every meaningful way” and some were sentenced for one-time drug offences when they were young.

The Government said it will urgently appeal against a Court of Appeal ruling which prevented 25 people boarding the flight after concerns were raised about whether those held in Heathrow detention centres had adequate access to legal advice.

The remaining eight people who were due to be deported but never boarded the flight are having their cases reviewed by the Home Office after they made fresh legal representations over their circumstances, the PA news agency understands.

Several separate legal challenges over individual cases had been brought to court on Monday.

As a result the eight are still being held in detention centres while their cases are considered. This could lead to some being released.

It is thought the case of Tajay Thompson is among those being reviewed in light of a High Court ruling which spared him from deportation at the last minute.

It ordered he must stay in the UK while a decision is made on his application for a judicial review after it was considered his case had “merit”.

The 23-year-old, from Battersea in south London, arrived in Britain aged five and served half of a 15-month sentence in 2015 after he was convicted of possessing the Class A drugs crack cocaine and heroin with intent to supply as a 17-year-old.

He claims he was groomed by a gang, forced to sell drugs and has not re-offended since his release around six years ago.

The flight follows news of a leaked report commissioned by ministers in the wake of the Windrush scandal which warned the Government that the deportation policy should be reconsidered in all but the “most severe cases”, particularly for those who came to the UK as children.

Under the UK Borders Act 2007, the Home Office must make a deportation order where a foreign national has been convicted of an offence and received a custodial sentence of 12 months or more.

This is subject to several exceptions, including where to do so would breach someone’s human rights or the UK’s obligations under the Refugee Convention.

On Tuesday the Prime Minister’s official spokesman said the Government made “no apology whatsoever for seeking to remove serious foreign national offenders”.

The flight sparked heated scenes in the House of Commons on Monday as Labour MPs pressed the Government on the matter.

A protest outside Downing Street later in the evening ended up with demonstrators blocking the roads around Parliament Square.

Later that night Lady Justice Simler ordered the Home Office not to carry out the scheduled deportation of some people amid concerns raised by charity Detention Action that problems with mobile phone signal at the Colnbrook and Harmondsworth centres in Heathrow had prevented them from having adequate access to legal advice while in detention awaiting deportation.