“Afghan soldiers fought side by side with British troops. They put their lives on the line to protect British soldiers. Now those people are counting on us. They are counting on you.” 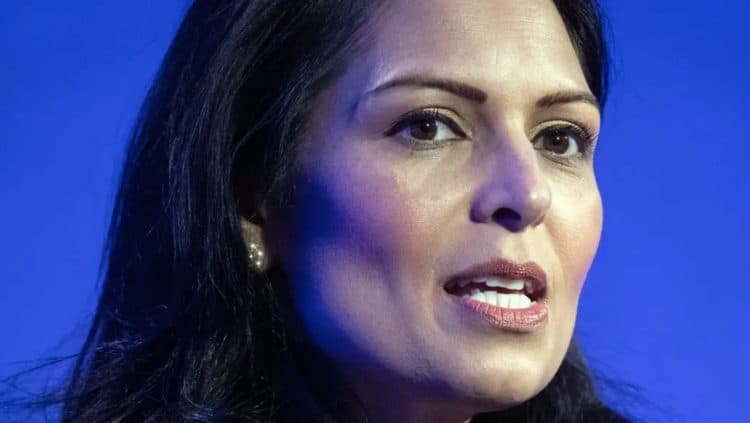 A message played outside the Home Office called for Priti Patel to ensure that Afghans “who risked their lives for Britain” won’t have to do so again to save their lives.

Zarlasht Halaimzai, co-founder and CEO of Refugee Trauma Initiative, told Patel how she and her family left their home Afghanistan when she was a child because they were fearing for their lives.

“I was afraid. I remember hoping against hope that I would be reunited with my grandmother. But I never saw her again,” she said.

Halaimzai, who is now also British, said people in her native Afghanistan are “terrified” and “full of fear” about current events.

‘Afghans were asked to trust British values, and they did’

She said that when the UK sent troops to Afghanistan two decades ago, the British asked Afghans to stand with them in the war against extremism: “We asked them to put their faith in British values. And they did.”

She added: “Afghan soldiers fought side by side with British troops. They put their lives on the line to protect British soldiers.

She called on the government to not betray its allies and “leave those who fought with us behind”. “Will you ensure that the people who risked their lives for Britain won’t have to risk their lives again – this time to save themselves?,” she concluded.

The video was Tweeted out by Led By Donkeys who recently projected a video about the government’s secret back channel onto the Houses of Parliament.

Earlier this week, a university teacher in Afghanistan told The London Economic that attempting to live under the Taliban again would be “like a suicide attempt”.

Abdollah’s father was murdered by the Taliban when he was just 10 years old – and has pleaded with the UK and US: “come and rescue us”.

A member of the Shiite Hazara minority, which has been subjected to years of persecution and massacres at the hands of the Taliban, Abdollah described the state of shock in Kabul.

Other than his brother, who does not live in Kabul, Abdollah has no family in Afghanistan. The few friends he has in the city told him they would try to leave soon.

He said: “They don’t let girls go to university and won’t let modern curricula to be taught. That’s the end of my career – and also for the rest of the people who worked as public servants. The Taliban will appoint their own forces to government offices.

“There’s a fear that they will start searching for people with specific backgrounds and different mindsets. They wouldn’t let any potential threat to their administration to become real.

“It’s wishful thinking that they have changed. They are behind most of the deadly attacks targeting Hazaras in Kabul and other provinces. Their approach is violence and ethnic purging.”

Rees-Mogg urges Brits to go ‘where they are welcome’