There has been deluge of support for Harland and Wolff workers as the work force continue their occupation of the historic shipyard even as the firm is placed into administration. 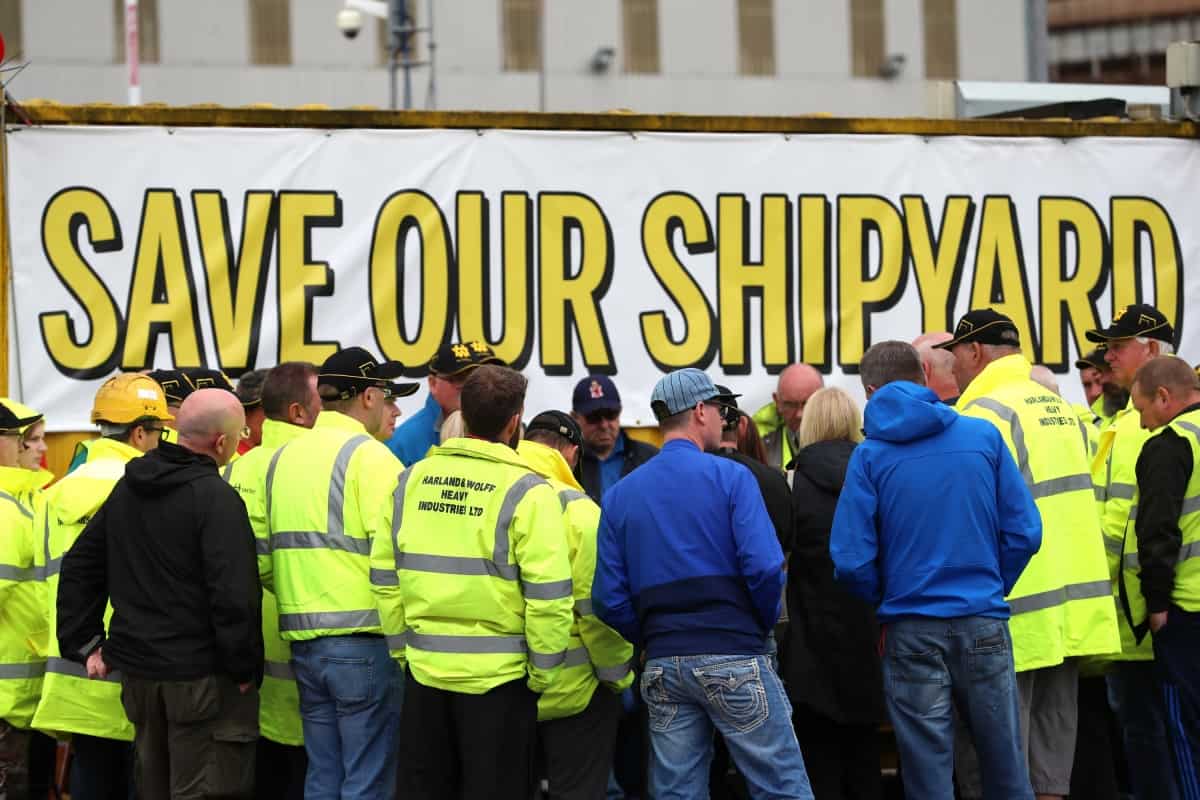 There has been deluge of support for Harland and Wolff workers from donations of suncream and food to performances by local celebrities.

As the work force continue their occupation of the historic shipyard even as the firm is placed into administration, there has been a steady stream of supporters arriving with donations and words of encouragement.

Newry singer Tommy Sands donned a Harland and Wolff cap as he performed a number of songs at the gates of the shipyard on Wednesday, including one he had written for the workers.

Unite shop steward and Harland and Wolff steel worker Joe Passmore thanked Mr Sands, saying his performance had made the hairs on the back of his neck stand up.

“Fantastic, I’m sure every shipyard worker here had the same feeling, I know you did actually,” he said.

He also thanked Socialist TDs Ruth Coppinger and Paul Murphy who were visiting for their support and revealed a protest in support of the workers was planned to take place in Dublin later this week.

I'm visiting #HarlandandWolff workers in Belfast today. I've been speaking to them about nationalisation, also the ability to diversify into green industry such as turbines. Nationalise, don't allow vultures pick off resouces. #dubw pic.twitter.com/U9Hc27owpf

Ms Coppinger told PA: “We have come up today to show solidarity, the plight of these workers to save their jobs and also to save this iconic shipyard.

“It’s known nationally in the south of Ireland, associated with Belfast and it must be saved.”

24/7 occupation of the site

Harland and Wolff workers have vowed to remain on site until a solution is found, pressing government in particular with calls to step in and nationalise the business.

They are maintaining a 24/7 occupation of the site, fuelled by donations and support from the public.

A family fun day was held on Sunday as a thank you to the community for their support, but Barry Reid, a GMB union shop steward and steel worker, said there will be another thank you when the effort is over.

There is a constant sounding of car horns at the gates from passing vehicles showing their solidarity with the workers fighting to save the shipyard.

Mr Reid said the shipyard occupation has even become part of the tourism trail.

“We’ve had buses from the south coming by and waving at us, and some come out to talk to us,” he told PA.

However the biggest show of support has been the constant supply of donations, even fast food deliveries throughout the night.

“We’ve been getting drinks, crisps, sausage rolls, sandwiches, one wee man came down at 2am with McDonalds for us all, he said his grandfather had worked here,” he said.

“Businesses have been coming with donations and we have had community groups and churches bringing us biscuits and drinks.

“We had one wee girl came down with a big box of Celebrations for us, she said her granny had worked here.

“There has also been people donating money but we are discouraging that, we’d prefer supplies such as food and drink as we don’t want money lying around.”

Mr Reid said the workers had expected support, but not on the level they have received.

“We expected a bit of support, maybe a few toots of car horns and cheers, but not from as far and wide,” he said.

“There will be a big thank you said to the community when this is all done.”

Harland and Wolff is facing closure after its trouble-hit Norwegian parent company Dolphin Drilling failed to find a buyer.

Workers have occupied the site for over a week as part of a high-profile campaign to save the yard, which entered administration on Monday.

The shipbuilder, whose famous yellow cranes Samson and Goliath dominate the Belfast skyline, employed more than 30,000 people during the city’s industrial heyday, but now the workforce only numbers around 125.

It has diversified away from shipbuilding in the last two decades and until recently had primarily worked on wind energy and marine engineering projects.

Famed for building the doomed White Star liner Titanic, which sank on its maiden transatlantic voyage in 1912 after striking an iceberg, Harland and Wolff was one of the UK’s key industrial producers during the Second World War, supplying almost 150 warships.

Workers have called on the Government to step in to rescue the operation, potentially through nationalisation.

But the Government has declined to intervene, insisting the issue is a commercial one.