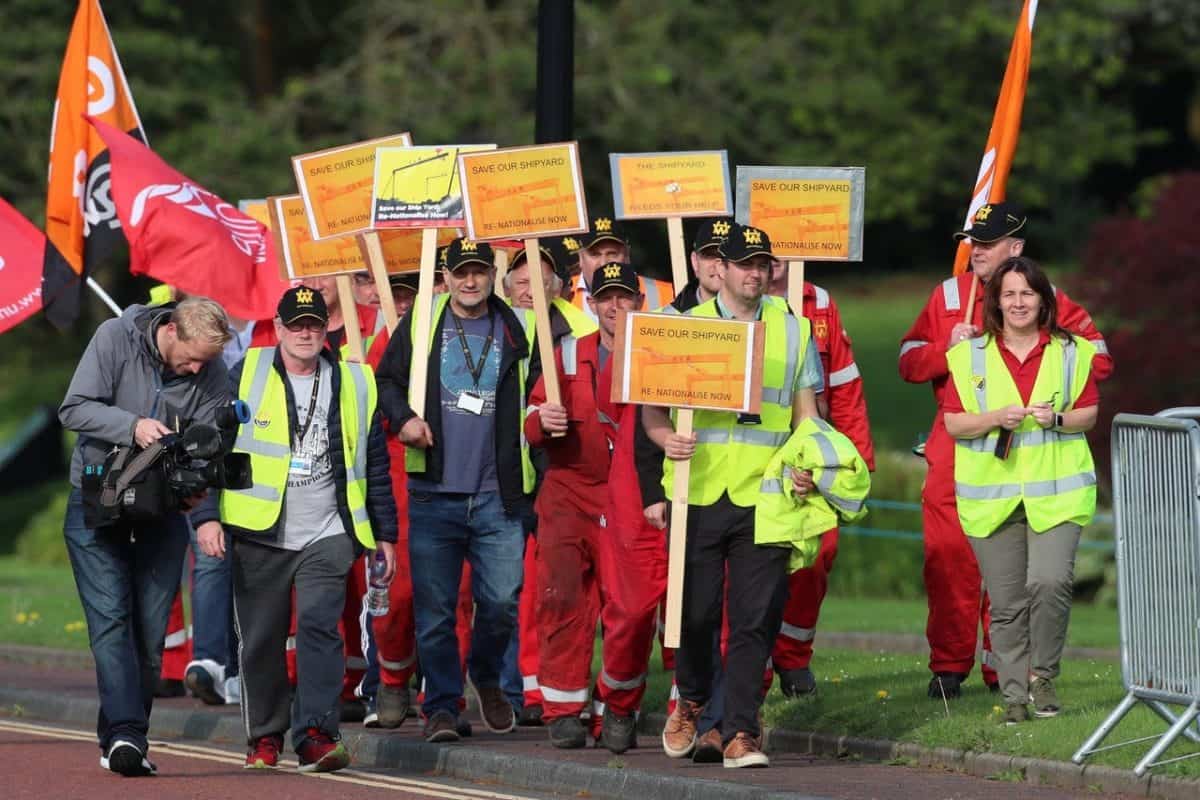 Boris Johnson needs to act before British industry is flushed down the drain, workers at an under-threat Belfast shipyard said.

Harland and Wolff could call in administrators as early as next week and the staff want the British Government to provide grant funding or nationalise an historic giant of Northern Ireland’s industry.

Workers staged a protest at Stormont where the Prime Minister is meeting the main parties and handed in a letter for him.

Steelworker Joe Passmore said: “If nationalising the shipyard is the issue here you can call it whatever you want.

“We want the money. Back us up here, we don’t care how you dress it up, make it count.

“Stand up for your words Boris, and mean what you say.”

Sinn Fein leader Mary Lou McDonald met workers from a shipyard which was once a bastion of working-class unionism as they gathered to protest against the threatened closure.

Irish language activists were also at Stormont Estate and sang: “Save Our Yard” in Irish in a striking symbol of solidarity.

It was a sign of fraternity in Northern Ireland’s at times deeply divided society.

There was a cacophony of protest at Stormont on Wednesday, with banners, loudspeakers and car horns hooting, all gathered at the seat of Northern Ireland’s devolved parliament.

Political powersharing has been suspended for two-and-a-half years and the Prime Minister said he is urging the parties to restore the institutions.

Negotiations are ongoing but there is little sign of an imminent breakthrough.

Brexit was high on the agenda of many of the parties who met the new British premier.

Ms McDonald told him it would be “unthinkable” if a no-deal Brexit was not followed by a poll on Irish reunification.

The Prime Minister is not visiting the border on this trip to Northern Ireland, but the border came to him in the form of protest group Border Communities Against Brexit.

Declan Fearon, a kitchen fitter from near Newry in the border region, believes people’s livelihoods will be threatened if a hard frontier is imposed – something the British Government wants to avoid.

Mr Fearon said: “We are here to tell him that what he is talking is absolute nonsense.

“We are certainly not going to sit back and allow it to happen.

“We are adamant that there can be no reinstatement of the border.”

Some fear a threat to Northern Ireland’s peace process if there is a no-deal Brexit and hard border.

The legacy of controversial killings during the 30-year conflict is an ever-present issue and campaigners from Ballymurphy in West Belfast, where 10 people were shot dead by soldiers in 1971, were also present outside the Stormont gates for Mr Johnson’s meeting.

Briege Voyle from Ballymurphy said: “He cannot say that he is going to change the law just to suit himself and suit his soldiers.”

Many MPs in Parliament favour a “statute of limitations” which would prevent soldiers from being prosecuted for Troubles killings.

Ms Voyle said: “We matter just as much as anyone else because we have suffered the most. Legacy needs to be sorted out.”